"Migration on the Balkans: Common Security Challenges and Ways to Cope with the Prolonged Crisis"

The Konrad Adenauer Foundation together with the Faculty of Security – Skopje from 3rd to 5th June hosted the regional student conference on the topic: “Migration on the Balkans: Common Security Challenges and Ways to Cope with the Prolonged Crisis” in Skopje and Gevgelija. About 50 participants from both Macedonia and Greece attended the conference which was organized in cooperation with two universities from Greece: "University Aristoteles" (Aristotelian University of Thessaloniki) and "Sheffield University - City College of Thessaloniki" (University of Sheffield) from Thessaloniki.
June 8, 2016 Ordering Information 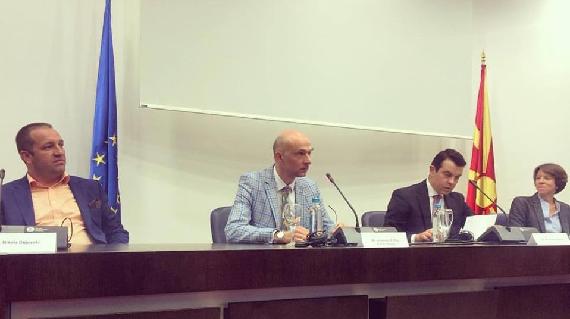 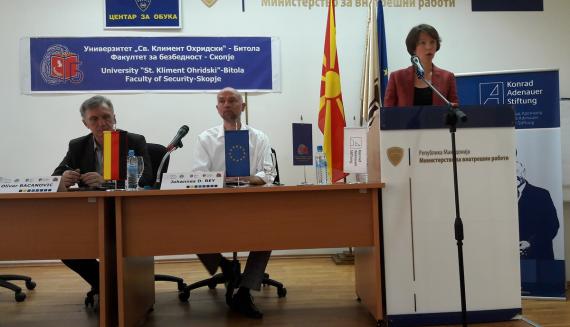 The Head of the KAS Office in Greece, Mrs. Susanna Vogt, delivering a welcome speech at the conference

The students paying a visit to the Ministry of Foreign Affairs 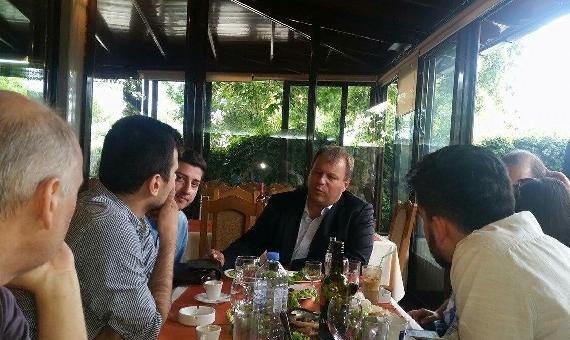 Students together with the Mayor of Gevgelija, Mr. Ivan Frangov
During the event, there were interactive lectures and debate between students and professors from Macedonia and Greece, as well as representatives of NGOs from both countries who are active in this area. Fostering intergovernmental cooperation between the two states for coping with common security challenges, the humanitarian challenges at the borders such as trafficking and smuggling, cross-border cooperation, migration and refugee crisis management, addressing the challenges of the prolonged refugee/migration crisis through regional NGO cooperation on the Balkans were among the main issues that were discussed on the conference.

Besides the panel discussions and workshops, the participants were hosted by the Minister of Foreign Affairs, Mr. Nikola Poposki, in the premises of the Ministry.

Additionally, the students had the opportunity to meet the Mayor of Gevgelija, Mr. Ivan Frangov and afterwards they visited the refugee transit center “Vinojug” where they were familiarized with the capacities and living conditions for the migrants who are currently settled there.