Since the opening of the representative office of the Konrad Adenauer Foundation in 2000, there was a significant number of activities that were aimed to contribute to further improvement of the overall circumstances in the country. In this regard, the cooperation with the academic community has been a particular imperative for us and we find this support in the publishing of this book as another step in this direction. We hope that this book will expand the knowledge of students, academics from all higher education institutions in the country, as well as all others interested in the topic.
April 20, 2017 Ordering Information

The first edition of the university textbook Political Parties and Interest Groups by the authors Prof. Savo Klomovski (PhD) and Prof. Tanja Karakamiseva (PhD) was published in 2007. Nine years later, in April 2016, a reformed and supplemented edition of this work has been published by the authors Prof. Savo Klimovski (PhD), Prof. Tanja Karakamiseva (PhD), and lecturer Aleksandar Spasenovski (PhD).

This work is primarily intended for the students of Political Science at the Law Faculty Iustinianus Primus in Skopje, as well as for other students from other universities in the country who study this exquisitely significant issue as part of their courses. Besides that, this textbook corresponds to the curricula of the faculties of law, journalism, public administration, public relations, as well as other similar academic areas. Of course, considering the aims of each high education textbook, we trust this edition will be of use to all professionals outside the universities who deal with, or are interested in, issues related to political parties and interest groups.

The first part is titled Political Parties and Party Systems and consists of six chapters. The first chapter exposes views on basic issues related to political parties as a form of organizing people in democratic societies. Based on the information from the first chapter, the second chapter clarifies these problems via the presented review related to the issue of the development of political parties in four respective countries, i.e. the United Kingdom, the United States of America, France and the Federal Republic of Germany. In addition, the third and fourth chapters from the first part clarify this area further via the presented views related to the topic “party leaders and leadership theories”, as well as the topic “intra-party conflicts and fractions”. Finally, the insights from the first introductory part are unfolded within the two final chapters related to the issue of the types of political parties and party systems, as well as the issue of political party financing.

The third part of the textbook titled Elections and Electoral Systems comprises of four chapters. The first elaborates on the issue of citizens’ sovereignty, the second expands on the shapes of representative democracy, and the third chapter exposes the views related to the electoral system as a segment of the overall constitutional and political system of the state. The last chapter elaborates on the relation between the electoral and party systems, based upon the information presented within this chapter and the previous ones.

The fourth part of the textbook titled The European Parties and the Party System of the EU clarifies the topic further, through the example of a very important political entity and with particular reference to the Republic of Macedonia and the democratic world in general.

While drafting the textbook Political Parties and Interest Groups, appropriate professional and scientific literature was consulted, encompassing the latest insights of eminent authors and scientific authorities. Of course, considering the fact that this topic is the subject of the constitutional and legislative regulations of the state, a major corpus of constitutional and legislative texts of the more representative states were consulted, including of our country, the Republic of Macedonia.

The authors truly believe that this textbook will provide additional clarifications and will bring this complex and multi layered topic closer to all concerned individuals. Of course, despite the systematic approach and the proper diligence in exposing each of the topics there is an opportunity for this complex and infinite area to be explored further, which will only enrich and ennoble this work in the editions to come. 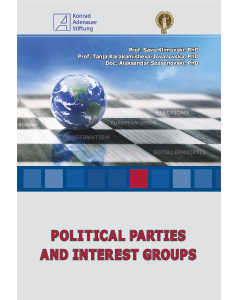