The Konrad Adenauer Foundation in cooperation with the University ”Euro-Balkan” - Skopje and the Wilfried Martens Centre for European Studies organized the third summer school “Religion, Ethnicity and Nationalism” from 12.-16. September in Struga, Macedonia.
September 23, 2016 Ordering Information 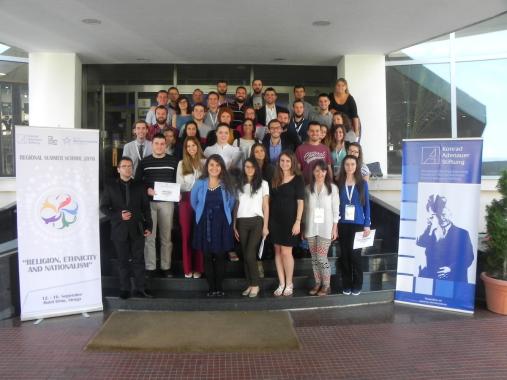 About 35 young people from the countries in the region participated at the summer school. Along with the lectures from distinguished professors and lecturers from Macedonia and countries in the region, they also had interactive workshops and study visits to religious objects in the city of Struga, as well as introductory lectures from the religious communities in Macedonia.

The topics which were covered during the five-day summer school varied from the multidimensional relationship between the state and religion, the challenges of secularism and modern democratic states, cultural diversity, ethnic identity and sustainable development. Furthermore, the rise of religious radicalism in the region of South Eastern Europe, the migrant crisis as incentive to the rise of nationalism in Europe and countering extremism through media were also tackled as topics within the summer school. In addition, the participants were able to discuss the role of the European integration as catalyst in accommodating religious and ethnic differences as well as the way to encounter from conflict through dialogues which were among the many topics that were covered during the summer school.