Over thirty young students from Macedonia participated at the Summer school titled as "Religion, Ethnicity and Nationalism", which was organized by the Konrad Adenauer Foundation in cooperation with the five religious communities and the University "Euro-Balkan" in the period between 15-19 September 2014 in Skopje.
November 22, 2014 Ordering Information

The five-day program was designed in a way that through lectures and workshops allow participants to interact directly with some of the most renowned lecturers in the field of religion, multiculturalism, theories of secularism and relationship of religion and state, media and its role in promoting cultural diversity and tolerance, interethnic relations and minority rights, etc.

The aim of the summer school was to contribute for increasing the public awareness of the role, importance and function of different cultural profiles in terms of social, intercultural and democratic reality in the country. The participants aged between 18-28 years, applied to participate because they were interested in the topics covered, and thought that the knowledge and experience gained from the summer school will help to advance their professional career or education.

Of particular interest among the young students were the visit of sacral objects of the five religious communities and the meetings they had realized with representatives of these communities. For most of the participants who visited the Orthodox Church “St. Demetrius”, the “Mustafa Pasha” mosque, the Catholic Cathedral “Sacred heart of Jesus”, the United-Methodist church and the Jewish synagogue “Bet Jakov”, this was unique experience which they had experienced for the first time. Discussions and debates between young participants lasted until evening in the picturesque setting of the courtyard of the University “Euro-Balkan”. 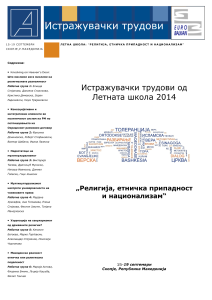