Following the strategic orientation of the Western Balkans region toward the European Union, 32 young people from Macedonia, Serbia, Montenegro, Kosovo, Albania, Croatia and Bosnia and Herzegovina gathered at the European Academy in Otzenhausen, Germany to put civic participation into best practice.

The Summer Academy took place from 21st to 30th of August and covered various range of topics concerning European integration and civic participation. Throughout the academy the participants were able to debate about areas such as: participative democracy, mobilization of young people, geopolitical challenges of the EU, social engagement and volunteering and building NGOs strategies. Furthermore the academy offered a space for building partnership among the participants and they were able to design projects aimed to be implemented after the end of the seminar. Additionally one of the distinguished guest speaker at the academy was Ms. Doris Pack, former MP at the European Parliament.

The program included field and study trips to: Schengen village where the famous agreement for free movement of goods and people was signed; Luxembourg City, a host of the European Court of Justice and visits to the European Parliament and European Commission in Brussels. 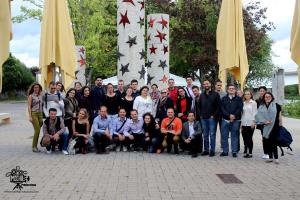