The corona pandemic has reached sub-Saharan-Africa. Against this backdrop, we report on the overall situation and take a closer look at the state of affairs in Côte d'Ivoire, DR Congo, Mali, South Africa, Tanzania and Uganda. Furthermore, we also investigate what German politics could do to mitigate the negative effects of the corona virus and how African countries can better protect themselves against further pandemics.
May 29, 2020 Ordering Information

› Should the governments in those countries examined fail to get a grip on the current emergency and should this even lead to misappropriation of aid and funds, their credibility would be undermined, all while new actors such as religious authorities, diaspora groups and / or influential individuals and entrepreneurs will obtain more influence. These parties could become more relevant for German and European development cooperation in the future.

› In view of the potential loss of confidence in the current governments in the countries herein examined, it seems opportune for opposition actors to demonstrate their presence during this crisis within the scope of their options, and to adjust to potential windows of opportunities arising from emerging shifts in power. It cannot be ruled out, for example, that a coalition of opposition parties could form the government in South Africa after the upcoming elections due to losses by the ruling ANC Party. Younger political actors, particularly in government parties, but also influential local authorities, to whom the will to change has been attributed, could benefit from any such power shifts. In the Democratic Republic of the Congo, for instance, such an actor could be the former governor of the Katanga region, Moïse Katumbi.

› In the foreseeable future, the situation is challenging for civil society actors and media representatives,whose freedom of action, which had been restricted in many places already before the pandemic erupted, was further reduced by those in power for fear of competing narratives. The situation is particularly serious in Tanzania, where President Magufuli, since taking office in 2015, with his increasing constraints on media and civil society, has created the optimal conditions to prevent any public criticism of the direction he has taken.

› Hence, the Covid-19 pandemic should be used as a catalyst for German development cooperation, in order to, firstly, examine Germany’s cooperation with existing and new partners across sub- Saharan Africa, and, secondly, to investigate the strategies and instruments of the German government’s policy approach to date in Africa to identify potential adaptation needs. The Covid pandemic has further bolstered the need for international cooperation and multilateral formats. 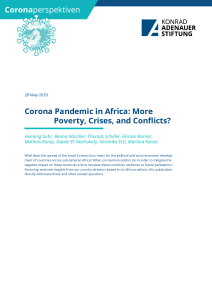 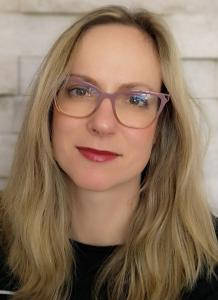 Libya - Developments in the Shadow of Corona

Climate Performance of the G7 States and the Corona Crisis