Almost 50.000 visitors came within three weeks to the National Museum of Singapore to see the 145 award-winning photographs of the World Press Photo 2015 exhibition. These are twice as many visitors as in the past year.
March 8, 2016 Ordering Information 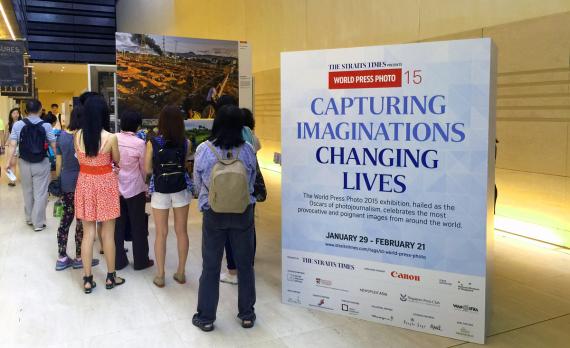 The photographs of the World Press Photo 2015, which have been exhibited between January 29 and February 21 in the National Museum of Singapore, let visitors immerse in various worlds. One of these worlds shows the photographs of Sarker Protick, photo journalist from Bangladesh and current award winner in the category “Daily Life”. His series provides a very intimate glimpse of his dying grandparents’ life. Protick, who attended the opening as a guest of the KAS Media Programme Asia, told the visitors the story behind his photographs and shared his experiences in two workshops and group discussions. More than 1.000 visitors attended the altogether five workshops this year. The World Press Photo exhibition in Singapore was hosted by The Straits Times, longstanding partner of the Media Programme Asia and member of Asia News Network (ANN).