The results of the new publication of the KAS Media Programme South East Europe and the European Council on Foreign Relations (ECFR) Sofia were presented in an online discussion with experts from Bosnia and Herzegovina, Bulgaria, Croatia and Taiwan.

Vladimir Shopov, expert on foreign relations and visiting fellow at ECFR Sofia, has conducted a study on behalf of the KAS Media Programme South East Europe on China's media presence in eight South East European countries - Albania, Bosnia and Herzegovina, Bulgaria, Croatia, Kosovo, Montenegro, North Macedonia and Serbia. He presented the main findings of his research during the online event, moderated by Vessela Tcherneva, Head of the ECFR office in Sofia, on 9 December.
December 10, 2020 Ordering Information 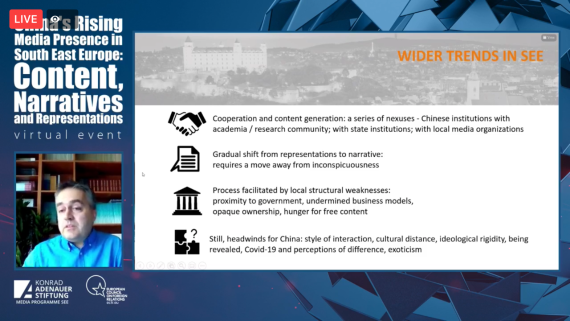 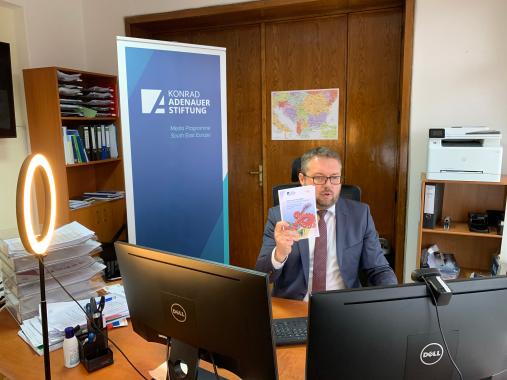 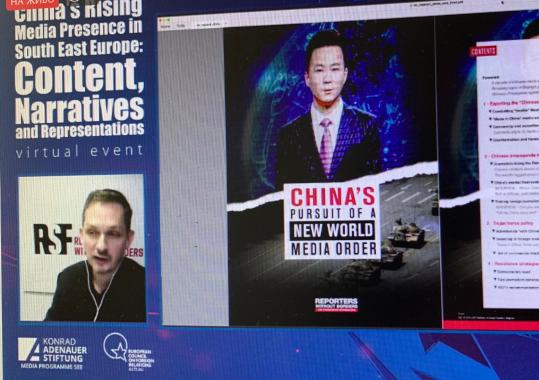 Cédric Alviani, Head of the East Asia office of Reporters Without Borders in Taipei 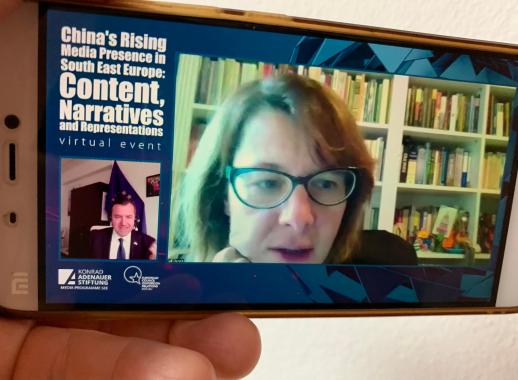 The experts agreed that resilience must be built up. Not only civil society, but all relevant actors from different areas should contribute to this. 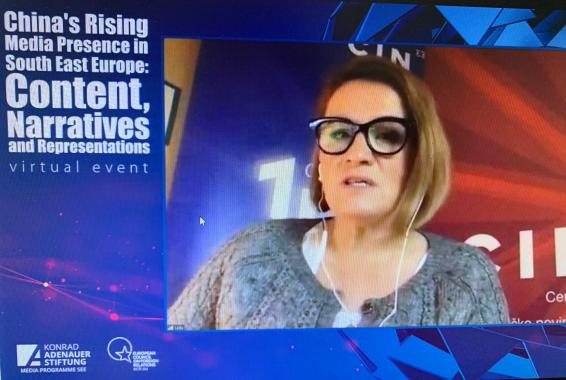 Leila Bičakčić, Director of the Centre for Investigative Reporting (CIN) in Sarajevo

Hendrik Sittig, Head of the KAS Media Programme South East Europe, stated in his welcome address that China has become a global and geopolitical player nowadays, trying to enforce its interests also with hidden soft power methods. Nevertheless, he pointed out that no investment project is worth cutting back on democratic values. "If we start to no longer believe in democracy, justice and freedom, our society as we know it today will no longer exist".

Vladimir Shopov's study shows how China is positioning itself in the media sector in South East Europe. According to Shopov, it is possible to identify a structured but very complex Chinese approach, which operates on several levels, within a broad trend. On the one hand, the quantitative aspect of the research shows that an increase in Chinese-related content - mostly positive in nature and with only a few critical voices - can be observed across the entire media sphere. On the other hand, the scope within which Chinese actors operate was also taken into account. It became clear that China always positions itself where there are obvious opportunities for cooperation and interaction. Chinese institutions get in contact with local state institutions, with the academic community but also with civil society organisations and cultural associations and institutions.

Ognian Zlatev, Head of the European Commission Representation in Zagreb, also sees a clear pattern of Chinese actions. Countries with repressive governments are being targeted as well as journalists from developing countries. So-called white (the channels are usually official Chinese representatives and can be clearly identified) and grey propaganda (content comes from unchecked sources and the channel cannot be clearly identified) is used to exert influence. This is not only done offline through the above mentioned cooperation and networks, but also online, for example in social networks.

Vladimir Shopov further referred to a structural problem regarding the perception of China within society. There is a fundamental misperception of external interference and China's foreign policy and its actual impact on national politics, economy and media. The explanation for this deformed perception is largely the images of China presented in the media.

Leila Bičakčić, Director of the Centre for Investigative Reporting (CIN) in Sarajevo, also confirmed such observations regarding the perception of China in Bosnia and Herzegovina: "China is still seen as a neutral investor - the general perception is very positive, which is surprising. Black and white pictures are drawn when it comes to foreign interference in national affairs. People speak of friends or enemies depending on the context. There is nothing in between. China is seen as a friend." This perception would result from China's rather "understanding" mainly economic policy - within which Chinese investments are made quickly and usually without any questioning.

Cédric Alviani, Head of the East Asia office of Reporters Without Borders in Taipei, also identifies a clear strategy behind China's actions and considers its understanding of the media to be particularly critical: "The point is that China sees the media as a warfare tool. For China, the media are not a democratic tool and do not serve the citizens. For the Chinese regime, the Belt and Road Initiative is a perfect boulevard for establishing a new controlled media order - it is a way for them to interfere in the region. It is an authoritarian regime that wants to replace investigative journalism with propaganda". Alviani also appealed to the public and civil society to take countermeasures and to oppose such trends more consciously: "The more democratic, the more immune to Chinese influence!

The experts agreed that resilience must be built up. Not only civil society, but all relevant actors from different areas should contribute to this. "Awareness of the need to strengthen media literacy must be raised, cooperation between the countries of South East Europe and the exchange of experiences regarding China's influence strategies must be promoted, but legal solutions are also needed, as well as a strengthening of the economic independence of the countries in the region," stated Ognian Zlatev.

Finally, Vladimir Shopov emphasised that despite China's existing strategy, one cannot speak of a coherent narrative in the South East European region. Nor do the results of the study imply that China will not encounter resistance: "China will face headwinds (cultural distance, ideological rigidity and also the consequences of the COVID-19 pandemic)".

All results of the study are available for download in the publication here.