Online Round Table: Media Law Developments during the Corona Crisis

by Dobrina Trifonova
A long-standing cooperation brings together the KAS Media Programme South East Europe and the EMRK working group named after Article 10 of the European Convention on Human Rights. Regional exchange (this time in digital form) with experts from Albania, Bosnia-Herzegovina, Bulgaria, Germany, Hungary, Kosovo, Montenegro, the Republic of Moldova, North Macedonia and Serbia took place on the 11th of June. Current developments of the media law were discussed during the session.
June 12, 2020 Ordering Information 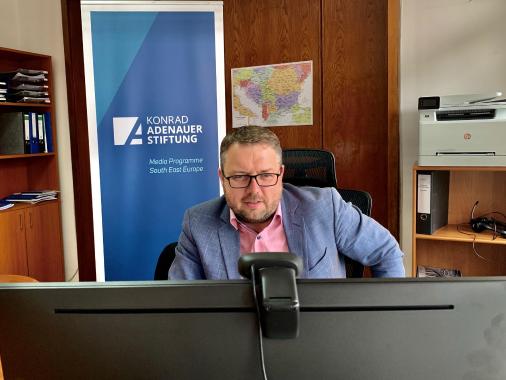 Hendrik Sittig, Head of the KAS Media Programme South East Europe, welcomed the participants and emphasised the exceptional circumstances that seem to intensify the democratic deficits in the region. 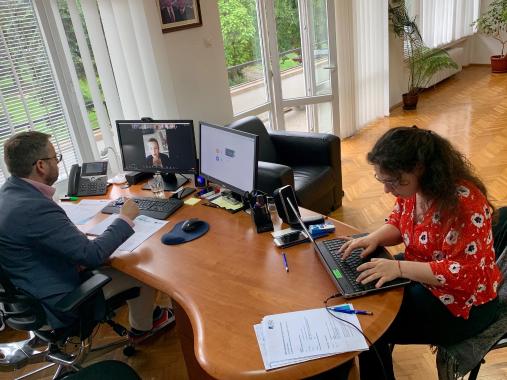 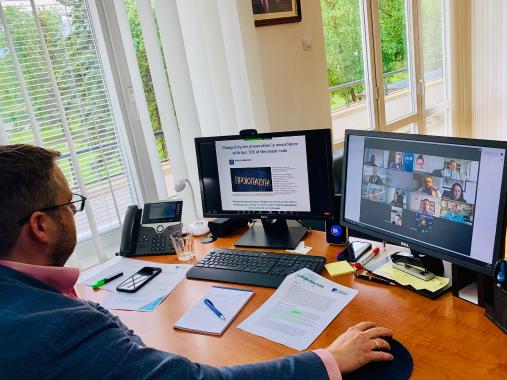 KAS MP SOE
A long-standing cooperation brings together the KAS Media Programme South East Europe and the EMRK working group named after Article 10 of the European Convention on Human Rights.

Hendrik Sittig, Head of the KAS Media Programme South East Europe, welcomed the participants and emphasised the exceptional circumstances that seem to intensify the democratic deficits in the region: “The situation is worsened by the lack of awareness for quality journalism, by media often driven by interests and sensationalism as well as by the relatively low trust in journalistic reporting and insufficient level of media literacy.”

The infodemic of fake news and self-censorship

During the Corona crisis there were several tendencies to be observed. One of them was the increasing self-censorship which emerged due to the restrictive legislation. The disproportionately high fines and imprisonments led to intimidation of both journalists and the public. A balanced reporting was thus hindered and the distrust in media grew even more. Another tendency was the massive confrontation with fake news. During the crisis online media served as a main information source in the majority of the countries in the region. The increased consumption of online news rose the risk for the users to consider unchecked information (including different conspiracy theories) as true. “People are suffering from lack of reliable information and that is what we need more than anything at this time”, said Dr. Brikena Kasmi, attorney at law and academic on media law at the University of Tirana. However, draft laws were submitted to fight disinformation and fake news “on paper”, but in reality envisaged restrictions for independent media struggling all the more to survive the crisis time. Civil society, media and NGOs didn’t stay indifferent and reacted fast. In Bulgaria for example a legislative proposal for the amendment of the media law, that foresaw closing of websites and imprisonment up to three years for spreading fake news, as well as an amendment of the law on protection of personal data, were rejected.

Support for the media and engagement of the society

The important role of the civil society, NGOs and journalistic associations was underlined by Nadine Gogu, Director of the Independent Journalism Center (IJC) in the Republic of Moldova. During the Corona crisis the journalists were confronted with the decision to quote official statements (e.g. from the government) only, that could lead to extremely one-sided reporting. This decision was withdrawn due to the high public pressure though. There are still ongoing efforts to repeal the extended term for access of information from state institutions (from 15 to 45 days). “We have learned to be more solidary and react faster whenever needed in order to protect journalists’ rights”, commented Gogu.

Prof. Johannes Weberling, Head of the Department of Media Law at the Viadrina European University in Frankfurt (Oder), spoke about the current situation in Germany. Even in times of crisis experts are working on the amendment of the State Broadcasting Treaty. Media were considered as “critical infrastructure”, i.e. their failure would result in dramatic consequences for the society. For employees with systemically relevant occupations the state provided inter alia child care during the lockdown. Further regulations were adopted, for instance transition to flexible working hours for employees in the media sector. In almost all federal states media was categorised as systematically relevant.

More in the event report here. 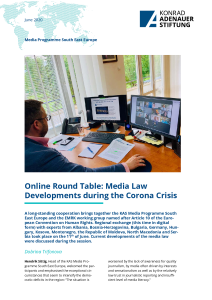