SEE media forum in hybrid format: Quality journalism is more important than ever in times of crisis

This year, the XIV. edition of the South East Europe Media Forum (SEEMF) was held for the first time in a hybrid format, in six venues all over South East Europe. Economic challenges for the media due to the COVID-19 pandemic, sustainable digital transitions and the reliability of the media in the context of the global crisis were discussed during the forum.
October 28, 2020 Ordering Information 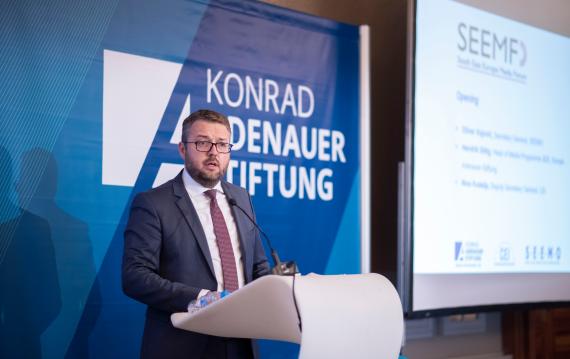 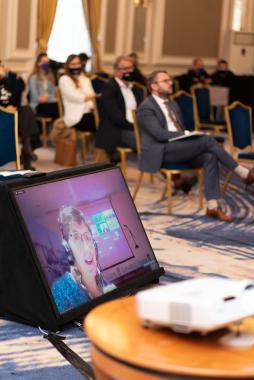 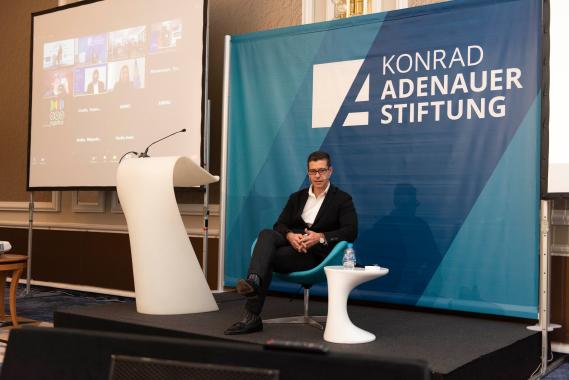 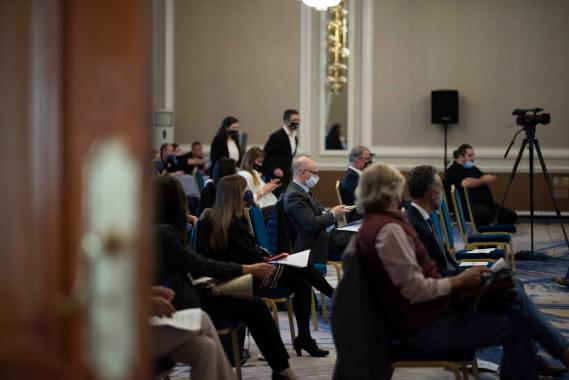 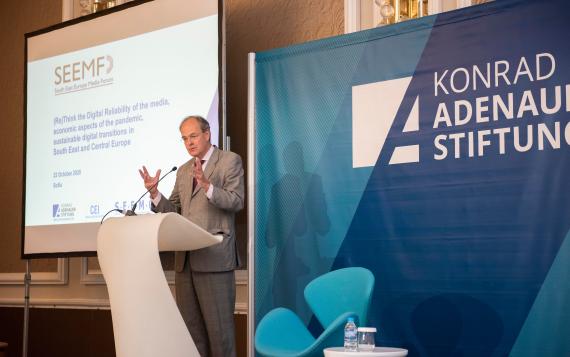 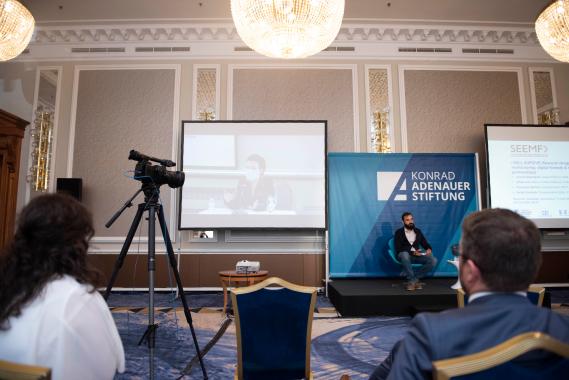 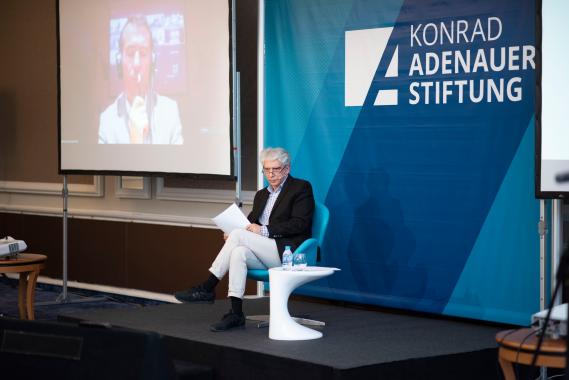 This year’s hybrid SEEMF entitled “(Re)Think the Digital: Reliability of the media, economic aspects of the pandemic, sustainable digital transitions in South East and Central Europe” was opened by Oliver Vujović, SEEMO Secretary General, Nina Kodelja, Deputy Secretary General, and Hendrik Sittig, Head of KAS Media Programme South East Europe. “Media are still alive! I would say: Media are more alive than ever”, said Hendrik Sittig. “Especially in these times of crisis it is important that the citizens receive correct information”. The German Ambassador to Bulgaria Christoph Eichhorn welcomed the audience in Sofia and called for transparent media ownership, plannable financing for the public service radio and TV, editorial independence as well as professional ethical standards of the journalistic job.

The hybrid format of the conference involved digitally connected conference hubs – expert groups that gathered in the six above mentioned South East European cities. The topics of this year’s media forum were discussed among these hubs and live streamed via the online platform Zoom. The audience on spot had the possibility to ask questions and actively participate in the online discussions. “Covid has turned our entire life upside down. Worldwide we have experienced for months now a situation we had never had before. […] But in every problem there is an opportunity” remarked Hendrik Sittig. “This year’s conference is a big digital experiment.”

Topic of the first panel was reliability of the media during the so-called infodemic (caused by the pandemic) – a flood of disinformation about the virus, etc. That was and still is a big challenge for both journalists and media users. Under the headline “Trust me, I am a journalist!” the panellists shared their professional and private experiences, concerns and lessons learned. The panel was moderated by Maja Sever, Journalist at the Croatian Radiotelevision (HRT) in Zagreb. All four panellists agreed that the working conditions for media representatives and the access of information have become more difficult during the pandemic. Andon Baltakov, Director General of the Bulgarian National Radio (BNR), described the current situation as “the most challenging period, probably in the history of journalism”. As follows: “Now everybody is a reporter, everybody is an analyst. […] Journalists have to uphold the professional standards. That is a challenge.” Journalists must fight for that and this does not happen without consequences. Milorad Ivanović, Editor-in-Chief of the Balkan Investigative Reporting Network (BIRN) Serbia, and also Mihailo Jovović, Editor-at-Large at the Montenegrin News Portal “Vijesti”, reminded of the mental health of journalists as well of the fact that this aspect perishes in the public debate: “We are unprepared for this kind of pressure. I hope for the future that we can invest more money in the mental health of journalists”, said Ivanović. From the financial perspective media and media representatives are challenged and are reaching their limits. For that reason, Cecilia Anesi, investigative journalist and board member of the Investigative Reporting Project Italy (IRPI), emphasised the importance of a functioning network for getting information in crisis times: “The knowledge gained and access to sources, we already have, had and maintained for a long time, were crucial for our work and investigations.”

The second panel “I will survive!” dealt with new partnerships and cooperation possibilities, financial struggles, restructuring and alternative digital formats. Ali Aslan, international TV host und journalist from Berlin, moderated the discussion. It was clearly stated that the journalistic profession, especially in a crisis, plays a leading role and is of particular importance for the society. “I am not sure we have 100% trust, but the work of journalists gains more significance”, said Francesco Martino, correspondent for the think-tank “Osservatorio Balcani e Caucaso Transeuropa”. “There is an increased need of quality journalism. Media should function in interest of the public, but also the society should value and support their work.” Upon the question if the pandemic could be seen as an impulse for reshaping the media landscape, there were different opinions by the media experts in the panel. Nevertheless, they agreed that despite the challenges, deficits and setbacks, the media has to adapt in to the new situation in one way or another. “Adjustment is the keyword. Adjust or fail.” – Alfred Lela, Editor-in-Chief of the Albanian News Portal “Politiko.al”.

Through the pandemic, the digitalisation of the media accelerated. All panellists acknowledged that the digitalisation is both blessing and curse. It costs time and investments, above that you cannot oppose this trend and set it aside.

With regard to the financial struggles for media, it became clear that those have already existed in the majority of the countries in the region long before the corona crisis. “Economic challenges are not new for us”, commented Jovana Gligorijević, Depity Editor-in-Chief of the Serbian weekly “Vreme”. "But because of COVID-19 we now have a bigger audience. The current challenge are the missing capacities. We have to constantly restructure.”

However, at most in difficult times it is eminent to stick to the journalistic standards. The editor of the Slovenian News Agency (STA), Nadja Podobnik, reminded of those: “Let us serve the public and let us use all the tools that are there for us. Be professionals, be good journalists!”

The third panel entitled “We are young!” addressed the demands and needs of the young audience. A new generation of media consumers grows up and challenges the traditional media. Among others, the strategies of the public service media how to approach young audiences were discussed. The consumer behavior of young people changes constantly, observed the four panellists. “Public media should use the current situation to improve, to work on themselves”, advised Ivan Lovreček, Managing Director of the digital agency “Videoclick”. It is difficult to find financing for formats specially intended for young audience. Another factor are the so-called influencers – private persons that produce content for e.g. YouTube. In some extent there are competing the traditional media, which should not be underestimated. They have extensive networks and reach mainly young audiences. Lorik Arifaj, Programme Director of the public service TV RTK in Kosovo, sees an opportunity in the influencers: “We work together with them. We invite influencers with a huge number of followers in our shows and ask them to promote us. This way young audience can be attracted.”

Felicia Reinstädt, Head of the public service youth offer “Bremen NEXT”, also supports the idea of this kind of cooperation. And above that: “Our journalists are mostly young. For them is natural to work in social media and they bring the know-how with them. That is important. You have to build a dialogue with the young audience in a suitable way, so they can identify themselves with it.” Petar Karaboev, Deputy Editor-in-Chief of the Bulgarian News Portal "Dnevnik" stated in addition, that the young audience raises the requirements for the journalistic work.

Moderator Maida Muminović, Executive Director of the Bosnian NGO "Mediacentar Sarajevo" summarised that the social media presence is a must and that adapting content to younger minds becomes more important. Engaging young people seems to be a key strategy. Reporting on pandemics is an open door to gain and regain the trust of young audience.

In their closing words, the organisers Nina Kodelja, Oliver Vujović und Hendrik Sittig thanked all panellists, moderators and guests for their participation, engagement and for their flexibility regarding the hybrid format. In the end it turned out to be a successful, but also challenging in its organisation, experiment. They shared their hopes that the situation next year will be better.