The EU’s foreign policy towards Cuba: between pragmatism and value-orientation

Conference hosted by the Konrad-Adenauer-Stiftung, “Multinational Dialogue on Development Policy”

Due to the death of the dissident Osvaldo Zapato Tamayo at the end of February, the

international attention was focused once more on Cuba. Osvaldo Zapato Tamayo died after 86

days of a hunger strike for better prison conditions. Whilst human rights activists in Cuba are

brave and still standing up with enormous personal risks for freedom and democracy, the

results of more than fifty years after the Cuban revolution are alarming. Facing the current

situation, the statement of Fidel Castro of 9 January 1959 sounds rather cynical, when quoted

nowadays, as he said: “There exists no censorship now, the press is free, and you can be

sure, that no censorship will ever be reintroduced. Today no torture exists, no assassination

attempts and no dictatorship. Today there is only joy…”.

Due to the attempt of the Spanish EU-Presidency to normalize the relationship with the Cuban government, regardless of the ongoing infractions on human rights, and because of the creation of new responsibility structures in the EU in the context of the Lisbon treaty – the new position of the High Representative of the Union for Foreign Affairs and Security Policy and an empowered European Parliament - the question needs to be discussed again: How coherent is the EU’s policy towards Cuba? The expert roundtable with those interested and engaged in Cuban and Latin American affairs aimed to contribute to this discussion and to promote a value oriented Foreign Policy of the EU.

16:00 hrs Welcome and presentation of speakers

European office of the Konrad-Adenauer-Stiftung, Brussels

Former President of the European Parliament,

Chairman of the Konrad-Adenauer-Stiftung

16:30 hrs Questions and requisitions regarding the EU’s policy towards Cuba: a Cuban perspective

17:00 hrs Cuba’s role and position in the Latin American context – What should the EU consider in her policy towards Latin America?

18:00 hrs Panel discussion: Rapprochement or Political pressure – to normalise or to solidarise?

Member of the German Bundestag,

Deputy Chairman of the CDU/CSU group at the Bundestag

Sub-Director General for Mexico, Central America and the Caribbean, 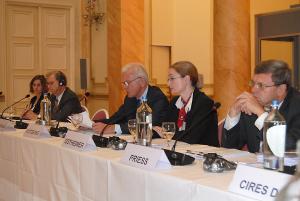 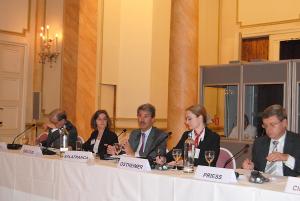