“Power and Prosecution: Challenges and Opportunities for International Criminal Justice in Sub-Saharan Africa"

Africa plays a vital role in international criminal law and justice, both as a stakeholder at the ICC and at the regional and national level. All situations and cases currently under formal investigation before the ICC come from Africa (emerging from situations in the Central African Republic, the Democratic Republic of Congo, Ivory Coast, Kenya, Libya, the Darfur region of Sudan and Uganda). While the ICC initially enjoyed broad support from African states, its focus on Africa and in particular the prosecution of a sitting head of state, Omar Hassan al-Bashir of Sudan, has sparked controversy. Indeed, the African Union issued several decisions calling upon their member states not to cooperate with the ICC regarding the arrest and surrender of al-Bashir. Due to the investigations, warrants of arrest and indictments against various African leaders by the ICC, the Rome Statute is now perceived by the broader African public as being biased against African states. The comparatively quick and unprecedented warrant of arrest against Colonel Ghaddafi contributed to this perception but also underlined not only the close nexus of international justice and politics but also the constraints the latter faces when international justice moves at its own speed.

Although many advocacy groups promote the cause of the International Criminal Court in Sub-Sahara Africa, KAS in the context of its activities on and with the ICC has identified the gap of a platform for exchange among practitioners and academics. In order to allow for a peer-to-peer exchange, KAS established in 2010 the Expert Study Group Sub-Sahara Africa following the example of its Latin American Study Group which for more then a decade brings together European and Latin American scholars and practitioners working regularly on and at the ICC.

Both groups exchange about the status quo regarding ratification, implementation of the Rome Statute and law harmonisation in their respective countries annually and publish on their research findings.

In order to further promote the research results of the African Expert Study Group which have been published under the title ‘Power and Prosecution: Challenges and Opportunities for International Criminal Justice in Sub-Saharan Africa’, the Multinational Development Policy Dialogue is organizing a book launch where representatives of the group from South Africa, Kenya and Rwanda will present their findings and enter into an exchange of views with stakeholders from the ICC, academia as well as the EU Institutions and NATO on African national legislative developments regarding the incorporation of the Rome Statute into domestic law, the development of international criminal justice in Africa, and the African Union’s influences on domestic implementation. With the contribution of

Principal Counsel, Office of Public Counsel for Defence, ICC, The Hague, The Netherlands 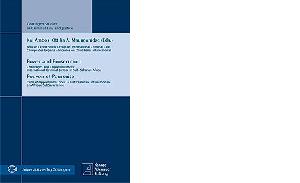