Having a Closer Look at Israeli-EU Relations

A Study Trip to Brussels with Young Israeli Diplomats

What about Europe's role in international politics? What lessons can the European Union draw from the financial and economic crisis? And what is the current state of Israeli-European relations? Those questions were discussed during a five-day study tour to Brussels for a number of young Israeli diplomats from various ministries, the city of Tel Aviv-Jaffo, as well as members from the Polish and the Dutch Embassy, respectively, in late March.
April 27, 2012 Ordering Information

The program was organized by the "Multinational Dialogue on Development Policy" of the Konrad-Adenauer-Stiftung in Brussels, led by Andrea Ostheimer in collaboration with Dr. Laurence Weinbaum, Samson Altman-Schevitz and Yvette Shumacher from the Israel Council on Foreign Relations (ICFR). The Council is an important cooperation partner of KAS Israel. Together they established the "Israeli-European Young Diplomats Forum". Nadine Mensel, Deputy Director of KAS Israel took also part in the program.

One week earlier, on March 20, the group had already met at the EU delegation to Israel in Tel Aviv. Ambassador Andrew Standley briefed the participants in order to exchange views on the current developments regarding the Israeli-European relationship. In addition, Nadine Mensel gave an introduction to the history and institutions of the EU. Furthermore, several policy areas that play a prominent role in bilateral relations were examined more closely, such as trade policy, immigration policy and the issues of internal security or the fight against terrorism. While Ambassador Standley outlined the positions of the EU, Daniel Halevy-Goetschel from the Israeli Ministry of Foreign Affairs remarked on the viewpoints of Israel. Both speakers agreed that an intensification of the relations between the EU and Israel would be highly desirable. In that respect, the negotiations for an "upgrade" of the Israeli Association Agreement with the European Union should be resumed..

Towards the end of the briefing, Ambassador Standley and Michael Mertes, Country Director of KAS Israel, had some travel tips along the way for the young diplomats. First of all, it was important to look for topics in Brussels that usually receive little attention in Israel. Likewise, the young diplomats should use the opportunity in conversations to present an image of Israel not only connected to the Israeli-Palestinian conflict..

The program of the study tour itself began in Brussels on March 26 with a reception at the Belgian Foreign Ministry. On this occasion, the former Israeli Ambassador to Germany and President of the ICFR, Avi Primor, discussed common challenges Israel and the EU face. Only through a trustful and close cooperation relations could be broadened step by step. However, it was also important to remain realistic about mutual expectations..

The second day was dedicated to the foreign relations of the EU. In that context, the delegation received a briefing in the German Mission to the EU outlining the goals of the European External Action Service (EEAS) were outlined. Furthermore, Josef Janning from the European Policy Centre provided a critical analysis of the effects and current condition of the EEAS. The authorities involved in the EEAS – the Commission, the Council and member countries – have until now failed to provide that foreign policy tool with a soundness it needs in order to improve the coherence of the EU’s foreign policy.

A discussion on the geopolitical implications of the "Arab Spring" was at the center of a public panel debate at the premises of KAS Brussels. Representatives Avir Primor, Dr. Laurence Weinbaum, director of the ICFR, as well as representatives of the Israeli Embassy analyzed the consequences of the upheavals in North Africa and the Middle East for Israel's foreign policy and how the EU should respond to those regional developments. All speakers agreed that Europe must not neglect its engagement in that region. However, at the same time the Union should also take into account Israel's security needs.

Israel enjoys a high priority in the work of the Konrad-Adenauer-Stiftung, the chairman of the foundation, Dr. Hans-Gert Pöttering, explained during a fireside chat with the delegation. Accordingly, good German-Israeli relations were a matter of heart, he said. At the same time, as a member of the European Parliament (from European People’s Party) he supported the strengthening of Israeli-European relations. However, Dr. Pöttering also stressed this goal was closely linked to progress in the Middle East peace process.

This issue was again picked up by MEP Michael Gahler, member of the EPP Group in the European Parliament, when the delegation met with Gahler in the European Parliament for an intensive exchange of ideas. An assessment of the Arab-Israeli conflict and the way how different EP committees thought about it was of particular interest. It came as no surprise, that many MEPs expressed themselves quite critical of Israel, said Gahler. Although the EPP considered itself traditionally among the pro-Israeli voices, the settlement policies of the Netanyahu government caused little enthusiasm in his fraction.

Following the above-mentioned “travel tip” from Ambassador Standley and Michael Mertes, economic issues as well as lobbying was part of the program on the fourth day in Brussels. Valerie Herzberg, member of the Cabinet of EU Council President Herman Van Rompuy, spoke about the impact of the financial and economic crisis and clarified some of the measures the EU had taken in that regard. Later on, a representative of the Northern German chambers of commerce presented the background for lobbying in Europe’s capital. For the Northern German Chambers of Commerce issues such as energy supply, transport safety and flow of international freight traffic were of primary importance. In all those areas, the EU had the authority to take decisions. Hence, the need for lobbying was obvious.

David Saranga, responsible for public relations at the Israeli Embassy, explained how non-EU countries like Israel advocated for their positions. On the one hand, one should not shy away from confrontation with critical voices towards Israel, he said. On the other hand, it was just as important to inform the European public about issues that were unrelated to the conflict. More specifically, as a location for high-tech industry, Israel was able to offer a lot which could also benefit Europe.

Because Brussels is not only the capital of Europe but also seat of the NATO headquarters, several appointments at NATO were part of the study program on March 29. An assessment of the relationship between Israel and the military alliance was given by Col. Uri Halperin, the Israeli military attaché at NATO. In addition, the delegation discussed the NATO’s operation in Libya and was briefed on the upcoming summit of the alliance taking place in Chicago in May 2012.

For many of the young diplomats, it was not the first trip to Brussels. Due to their different activities in the ministries of tourism, trade, foreign affairs or education, or as managers of EU projects at the City of Tel Aviv-Jaffo, they were familiar with the special political framework of Brussels. However, at the end of the tour the young diplomats were convinced to return to Israel with new impressions. Thanks to the numerous personal encounters in Brussels, they got to know many new and exciting facets of Israeli-European relations. Thus, it will be crucial for the Konrad-Adenauer-Stiftung Israel and the ICFR to seize that positive momentum and promote further meetings between Israelis and Europeans in different contexts.

Israel Council on Foreign Relations
More about this topic 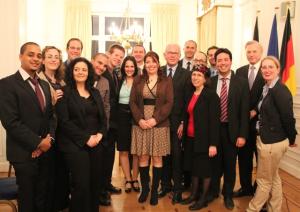 Nadine Mensel
Representatives from various Israeli ministries and from the City of Tel Aviv-Jaffo met with the Chairman of the Konrad-Adenauer-Stiftung, Dr. Hans-Gert Pöttering (photo: Nadine Mensel)

CO2 Border Adjustment as a Source of Revenue for the EU Budget?