Since independence in 1948, Myanmar has had four types of government systems: The Westminster-style democracy (1948-58, 1960-62), the first-generation military junta as well as the caretaker government and Burma's Socialist Program Party (1959-60, 1962-88), the second-generation junta (1988-2010), the quasi-civilian administration of General Thein Sein (2011-2015), and finally the national reconciliation government of Aung San Suu Kyi (starting from 2016). 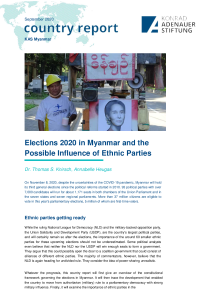