The two days events will bring together key stakeholders in Hardap Region to share knowledge and skills on Water Management.

The Olafika Media Engagement, SME Expo and Graduation ceremony was the culmination of the SME Skills Development Programme partially funded by the Konrad-Adenauer-Stiftung for a six-month period, with over 70 entrepreneurs.

The four days conference was an initiative to address the prevailing gender based violence (GBV) in Namibia. The conference brought together different stakeholders countrywide representing different institutions keen to share notes and views on how to reduce and tackle GBV successfully.

The two days workshop looked at the concept of democracy and leadership and was purely targeted at women of RDP party. The workshop was a success and instilled confidence in women as they prepared to share the knowledge with their communities.

“Milestones of three decades of Democracy in Namibia”

One World - No Hunger: Strengthening Women's Land Use and Land Ownership Rights

The Theatre Play "A Land for Women" will be staged in 10 villages in Omusati, Ohangwena, Oshana and Oshikoto Region.

Workshop with traditional Authorities of Ombadja

One World - No Hunger: Strengthening Women's Land Use and Land Ownership Rights

Launch of the Short Film "A Land for Women"

The film was produced for KAS through the special initiative “One World – No Hunger: Strengthening Women’s Land Use and Land Ownership Rights in Sub-Saharan Africa” to raise awareness about equal rights to communal land in Namibia.

International conference to mark the completion of the Customary Law Ascertainment Project of the Council of Traditional Leaders conducted by the Human Rights and Documentation Centre in the Faculty of Law of the University of Namibia.

From 01.-05. February 2015, the Parliamentary Support Programme (PSP), jointly funded by the Konrad Adenauer Foundation (KAS) and the European Union (EU), organised a post-election seminar for every member of the newly elected National Council. During the seminar the general focus lay on tasks and duties of the MPs, constitutional matters and current challenges which Namibia is facing.

An overview of Human Rights in Namibia: Where do we stand?

On the 9th of December 2015, one day before the International Human Rights Day, Forum For the Future (FFF) together with the Konrad Adenauer Foundation hosted a workshop about “An overview of Human Rights in Namibia: Where do we stand now?”. Phil ya Nangoloh, the Executive Director of NamRights, was invited as an expert to give an overview about the topic.

Workshop with the Trade Law Center

On 4 December 2015 the Konrad Adenauer Foundation (KAF) and the Trade Law Center (tralac) hosted a half-day workshop in Windhoek. The workshop presented an opportunity to appraise recent developments in Southern Africa, specifically as they pertain to the region’s integration agenda.

Review of the elections – Election observing up close

On November 27, 2015, 1.27 million registered Voters were invited to cast their votes in the Regional Council and Local Authority elections, for the fifth time since independence. As with the presidential and parliamentary elections, the resident representative of the Konrad Adenauer Foundation Namibia and Angola, Dr. Bernd Althusmann, was an official election observer. The three interns from Germany, David Wendorff, Lukas Horstmann and Ferdinand Rehder, were given a chance to accompany him and get their very own impression of elections in Namibia. 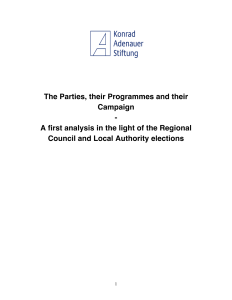 The Parties, their Programms and their Campaign

In order to give you a general idea of all the parties which are up for election, we have summarized each of their current campaigns and manifestos in the following article.

From 30 October to 1 November 2015, the New Windhoek Dialogue Meeting brought together UPADD (Union of African Parties for Democracy and Development) members and other representatives of center-right political parties from Angola, Democratic Republic of Congo, Ghana, Mozambique, Namibia, South Africa, Tanzania, Togo and Uganda; Members of the European People’s Party (EPP) Group in the European Parliament as well as representatives of the Konrad Adenauer Foundation.

“25 Years of Independence: Perspectives for the German-Namibian Partnership”

During the week of 5-9 October 2015, Prof. Dr. Norbert Lammert, President of the German Bundestag, visited Namibia on a private visit. During this visit, on 7 October, Prof. Lammert participated in a public lecture/discussion titled “25 Years of Independence: Perspectives for the German-Namibian Partnership”. Prof. Lammert offered a German perspective on the relationship between the two countries. On the other hand Prof. Joseph Diescho, a local political scientist offered a Namibian perspective on the relationship.

From Tuesday 6 October to Friday 9 of October, the Konrad-Adenauer-Stiftung Namibia/Angola together with the German Embassy received a visit of Prof. Dr. Nobert Lammert, the President of the German Parliament (Bundestag) and in this position, the second highest ranked person in the German State. This visit was initiated by an invitation of the Resident Representative of the Konrad-Adenauer-Stiftung Namibia-Angola Dr. Bernd Althusmann from December 2014.