The Association of German International Civil Servants (VDBIO) and KAS New York invite you to a lecture by Peter Beyer, Member of the German Bundestag, about the foreign policy priorities of the new coalition government in Germany.
March 27, 2018 6:00 - 8:00pm Clock

Peter Beyer MP was born on December 25, 1970, in Ratingen, Germany. After finishing his Abitur in 1991, he completed his military service in Wuppertal. Beyer then studied law at the Universities of Düsseldorf and Bonn. In 1999, he finished his studies and was admitted to the bar. Beyer began his legal career as an associate attorney for the US-headquartered firm of Mayer, Brown & Platt (today Mayer Brown). He also worked with Brinks, Hofer, Gilson & Lione in Chicago and Murchison & Cumming in Los Angeles. In 2000 he enrolled in a post-graduate legal studies program at the University of Virginia School of Law in Charlottesville and received a Master of Laws degree. Returning to Germany, Beyer practiced law at the BEYER Intellectual Property firm in Ratingen. There, he became one of the country’s first officially-certified intellectual property specialists. Beyer was directly elected in his constituency in the General Elections in 2009, 2013 and 2017 to represent the citizens of Heiligenhaus, Ratingen, Velbert and Wülfrath. A committed Atlanticist for many years, Beyer stands out among members of the parliament and his party as one of the most committed advocates of a strong transatlantic relationship with the United States and Canada. He serves as parliamentary Special Rapporteur on Transatlantic Rela-tions for the Committee on Foreign Affairs. He is an active member of Atlantik-Brücke, Aspen Institute and United Europe in addition to numerous organizations in his district. Beyer is Execu-tive Vice-President of the Südosteuropa-Gesellschaft (Southeast Europe Association). 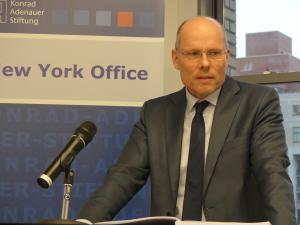