Seminar and Election Monitoring of the German Federal Elections 2013

What can Nigeria learn from Germany?

A seminar on German federal elections with journalists, 5 high ranking representatives from the Electoral Commission (INEC) and the Nigeria Police took place in the Konrad-Adenauer-Foundation office on 22.09.2013. The Secretary to INEC, represented by Mr. I.K. Bawa, Esq. gave an insight into the Nigerian electoral system and Dr. Weth, representative of the German Embassy in Abuja, explained the German electoral system.
September 22, 2013 Ordering Information 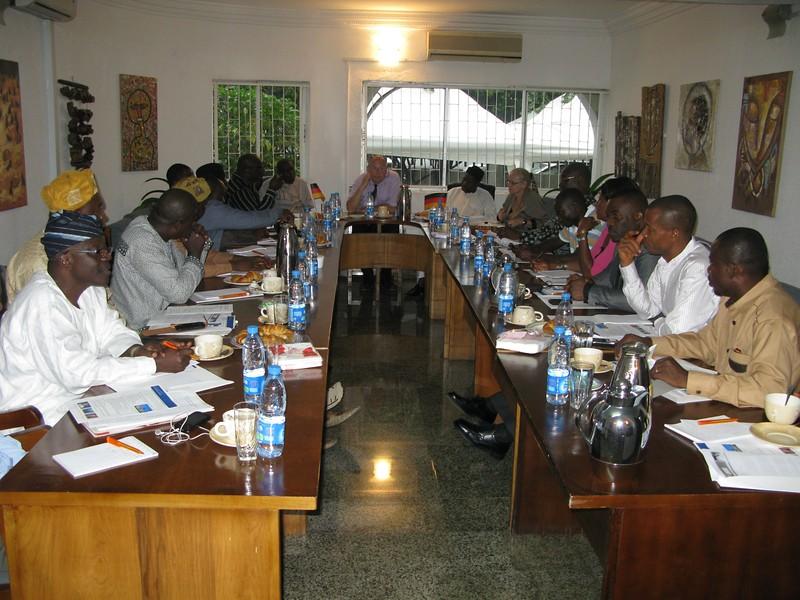 Senator Alkali Abdulkadir Jajere, Vice Chairman of the Senate Committee on INEC contributed with technical and political comments to a lively discussion among the journalists, the representatives of INEC and the country representative of Konrad-Adenauer-Foundation. Mr. Samson Adeniran, programme manager of KAS, shared his experiences with electoral activities and conduct of elections during the years he studied in Germany, which led to further interesting questions. The conduct of the Electoral Commission in the approval of candidates, in the recognition of conflicting court judgements and the dependency of politicians were also discussed like the registration or de-registration of political parties, as well as party and campaign funding. Comparisons were drawn with Germany in all aspects and it was hard for the journalists to believe that there is no election rigging in Germany.

Formation of parties and the influence of parties and their manifestoes on the voting behaviour as well as the building of government coalitions were explained by Mrs. Behrendt-Kigozi, the representative of KAS. At this juncture, the journalists asked whether the building of coalitions leads to pacification of a country and better governance and how much tolerance and respect is for this purpose needed. Also the question of violence before and on election days was discussed and in connection to this, the misuse of the police, which was interestingly acknowledged by Deputy Inspector General of Police, Mr. Philemon I. Lela and the Commissioner of Police, Mr. Nasiru Oki.

Apart from the participants of the seminar, the German ambassador, the French ambassador, the High Commissioner of South Africa, the Chairman House Committee on Electoral Matters of the House of Representatives, Honourable Jerry Manwe, the Secretary to the National Planning Commission, Mr. Fidel Ugbo, and many other German, Nigerian and international guests took part at the election monitoring afterwards.

The guests congratulated the Konrad-Adenauer-Foundation’s representative on the good election results of the CDU and regretted that the absolute majority was narrowly missed.

Seminar and Election Monitoring of the German Federal Elections 2013