While demand for holding local elections increases, and while pessimism regarding the chances for reconciliation increases, and while criticism of the PA for suppression of freedoms increases, credibility of the authorities in the West Bank and the Gaza Strip diminishes, support for a permanent settlement along the lines of the Clinton Parameters and the Geneva Initiative decreases, and two thirds oppose return to negotiations with Israel before it freezes settlement construction despite the fact that a majority believes Israel would be the first to benefit from no negotiations. 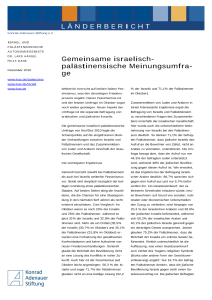 A majority of Israelis opposes intolerant steps toward Arab citizens. Palestinians incorrectly believe that the majority of Israeli Jews supports such steps. These are the results of the most recent poll conducted jointly by the Harry S. Truman Research Institute for the Advancement of Peace at the Hebrew University of Jerusalem and the Palestinian Center for Policy and Survey Research in Ramallah. This joint survey was conducted with the support of the Ford Foundation Cairo office and the Konrad Adenauer Stiftung in Ramallah and Jerusalem.

The newly-released report about “Critical Reading of Print Media” is the result of a joint cooperation between MIFTAH (The Palestinian Initiative for the Promotion of Global Dialogue and Democracy) and the Konrad-Adenauer-Stiftung (KAS) Ramallah.

The newly-released study about “The Consequences of Economy-Related Governmental Measures on the Industrial Sector” is the result of a joint cooperation between the Palestinian Federation of Industries (PFI) and the Konrad-Adenauer-Stiftung (KAS) Ramallah.

NATO in the Middle East?

Palestinians in East Jerusalem: Satisfied with Israeli Basic Services but no Trust in the State

After Israeli Return to Settlement Construction: Two Thirds of the Palestinians in the West Bank and the Gaza Strip Want the Palestinian Side to Pull Out of the Direct Talks 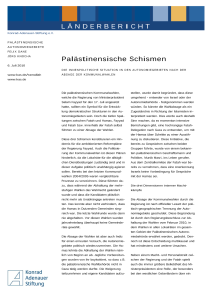