Within the frame of the Day of the Palestinian Prisoner, Sawt Al-Nissa has its focus on the legal rights of prisoners, particularly their legal status once released from prison. In addition, the magazine addresses the issue of woman released from prison and the lack of support they experience after their being released. 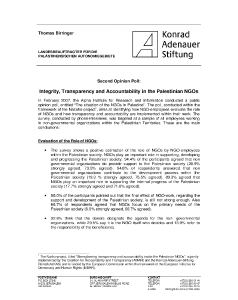 Opinion Poll among NGO-Employees about Corruption in their Field

85% of NGO-employees consider corruption as a serious problem in the Palestinian NGO-sector, while more then half of them (58%) rate the work of NGOs as too ineffective. This is the result of an opinion poll, among employees of Palestinian NGOs, conducted within the framework of the Nazaha-project by the Alpha Institute for Research and Information. The poll mainly focused on the areas transparency and accountability.

On the occasion of the Protestant Consistory in Germany (EKD) visit to Israel, chaired by bishop Dr. Wolfgang Huber, a reception and subsequent panel discussion took place in the parish hall of the Church of the Redeemer in the Old City of Jerusalem, on 10 April 2007. The discussion with the title: “Civil Society and the Middle East Conflict” was moderated by the Jerusalem correspondent of the German daily FAZ, Dr. Jörg Bremer.

The magazine this time reports about the tragedy in the Um al-Nasser village in Gaza that was flooded with waste water probably resulting from the bad drainage system of the Israeli settlements. The magazine is also asking for better legal protection for women.

In the course of her official Middle East journey, Angela Merkel visited Israel and the Palestinian Autonomous Territories on April, 1. After the Hebrew University in Jerusalem conferred her an honorary doctorate, Angela Merkel met with Mahmoud Abbas, President of the Palestinian National Authority in the afternoon in Ramallah. In her acceptance speech at Hebrew University and in the press conference held after her talks with Mahmoud Abbas, Merkel outlined her position towards the peace process in the Middle East.

General Committee Meeting of the Baader Youth Council in Jericho

Over 100 young students, chosen to be the members of the Baader Youth Council (BYC), gathered on March 22nd in Jericho to hold their second general committee meeting.Baader is a joint youth initiative of the International Peace and Cooperation Center (IPCC) Jerusalem and the Konrad-Adenauer-Stiftung (KAS) Ramallah. It aims at promoting the role of the youth in the democratic process, to develop the decision-making-skills of future executives, to reduce gender-related barriers and thus to assist in the building of a pluralistic and viable Palestinian civil society. 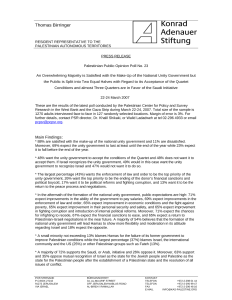 Majority is Satisfied with the Make Up of the Unity Government 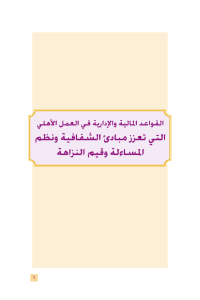 Financial and Administrative Standards for the NGO-Sector

In the scope of a recently accomplished study by the Nazaha Project, a catalogue of financial and administrative standards was compiled.

The Mothers Day issue states that two female ministers are not enough for the new Unity government. There should also be legislative reforms concerning the criminal laws that prevent Palestinian mothers from seeing their children in Israeli prisons. Also, Sawt Al-Nissa expresses concerns that the government could loose its direction towards unifying the political parties. 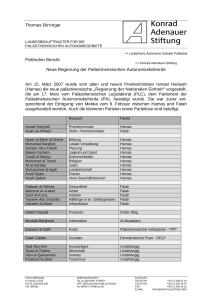