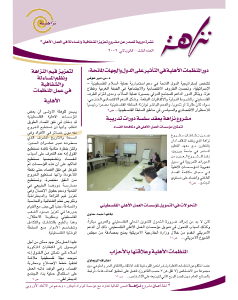 The third edition of the newsletter “Nazaha/Integrity” has been published, tackling the relations between Palestinian NGOs and the donor community as well as other issues concerning integrity, transparency and accountability within the NGO sector in Palestine. The newsletter is published regularly in the framework of the Nazaha project.

In the February issue, Sawt Al-Nissa makes reference to the Lebanon War by using the term “Palestine is bigger than us”. The term originally used during the war was “Lebanon is bigger than us”, meaning that no religious, political or ethical fractions can divide the country and that people therefore should be encouraged to preserve the unity of the country. Furthermore, a report portraits woman in politics.

Sawt Al-Nissa focuses on the Unity Government in this edition. After posing the question if there would be hope for a long desired Unity government, the magazine tries to find reasons for the political problems in Palestine. In addition, the focus lies on women and environmental issues. 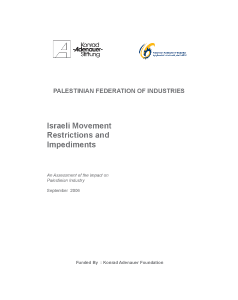 Israeli Movement Restrictions and Impediments: An Assessment of the Impact on Palestinian Industry

Due to the separation between West Bank and Gaza and the impediments on movement within West Bank, the Palestinian economy has been severely constrained and the competitive edge on local markets has decreased significantly. The access to external markets is complicated as well, because alternative trade routes can only be assessed with difficulties. 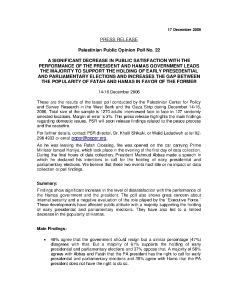 The result of the Public Opinion Poll No. 22 implemented by the Palestinian Center for Policy and Survey Research (PSR) in the West Bank and Gaza, funded by the Konrad-Adenauer-Foundation (KAF) in Ramallah demonstrates that:

In this edition, the focus lies on the Palestinian Homeland. Rather than fighting for political parties, the Palestinians should understand that their common homeland is more important, the magazine says. Under the heading “Gaza is crying”, Sawt Al-Nissa criticizes the internal fight of the political parties in the area. Furthermore the problem of poverty among women is addressed. 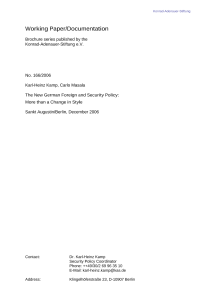 The New German Foreign and Security Policy: More than a Change in Style 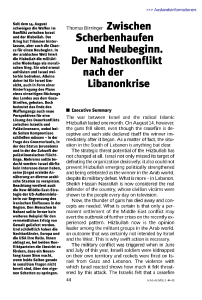 Between Pile of Rubble and a New Start. The Conflict in the Middle East and the War in Lebanon.

The end of the armed confronatation gives new perspectives for the solution of the enduring conflict between the Israelis and the Palestinians, with both sides having to compromise - regarding the borderline, the status of Jerusalem and the future of the Palestinian refugees.

Over 100 young students, chosen to be the members of the Bæder Youth Council (BYC), gathered on September 21st at Salem Effendi in Ramallah to celebrate the launching of the BYC.

Visit of the spokesman for foreign affairs of the CDU/CSU, Eckart von Klaeden to the Palestinian Autonomous Territories

On the 14th and 15th of September the spokesman for foreign affairs of the CDU/CSU, Eckart von Klaeden visited the Palestinian Territories in order to hold political talks and to get an impression of the situation in the region.