Visit of the CDU parliamentary group from Schleswig-Holstein

by Fee Brinkmann
A large delegation from the CDU parliamentary group of the Landtag (state parliament) of Schleswig-Holstein visited Israel and the Palestinian territories. State parliament president Klaus Schlie and the head of delegation and parliamentary group leader Tobias Koch were, amongst others, also present. The group learned more about history, social realities and the local political situation as they visited the Palestinian Territories.
May 22, 2019 Ordering Information

The program of the Konrad Adenauer Foundation Palestinian Territories (KAS) in cooperation with the German Representation Office Ramallah began on the evening of the 21st of May with a briefing by Christian Clages, head of the German Representative Office and Marc Frings, head of KAS Ramallah, alongside other representatives from German institutions. Topics of the briefing included the prospect for a resumption of the peace process, economic development in the Palestinian Territories, and the role of youth in politics and society (70% of Palestinians are under the age of 30). 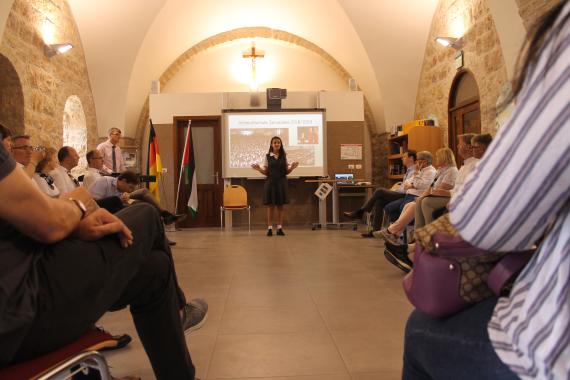 A student of the Schmidt's Girls College talks to the delegation 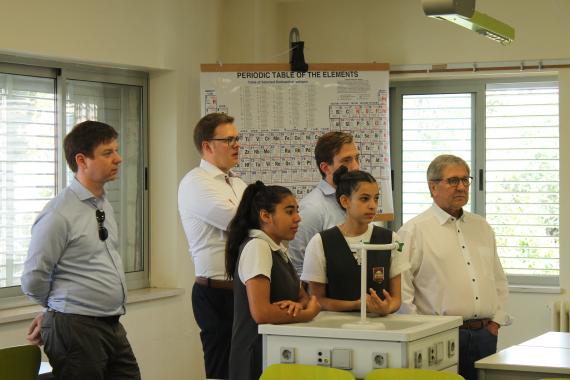 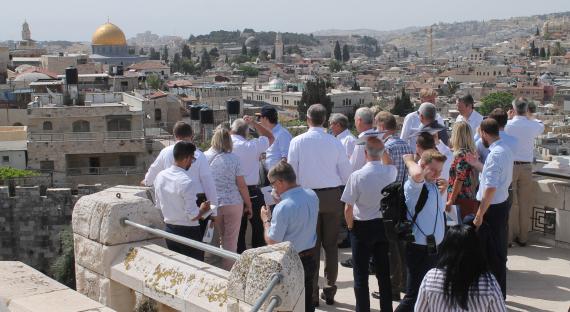 The delegation overlooking the old town of Jerusalem 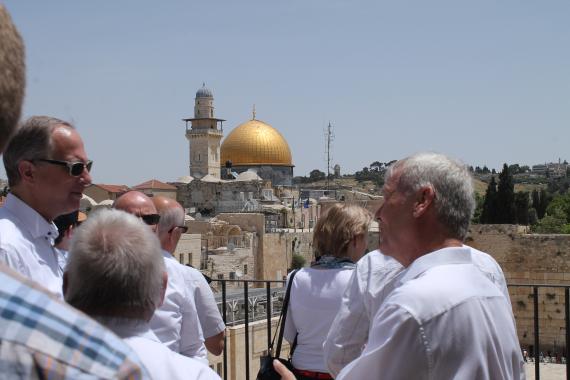 The delegation is looking at the Wailing Wall and the Dom of the Rock
The 22nd of May began with two meetings that were organized by the German Representative Office Ramallah. The delegation visited the Schmidt's Girls College, a German school abroad and learned about school- and everyday life in Palestine from the girls attending the school. Afterwards, a tour of the Old City of Jerusalem was guided by DVHL representative Dr. Ing. Georg Röwekamp. 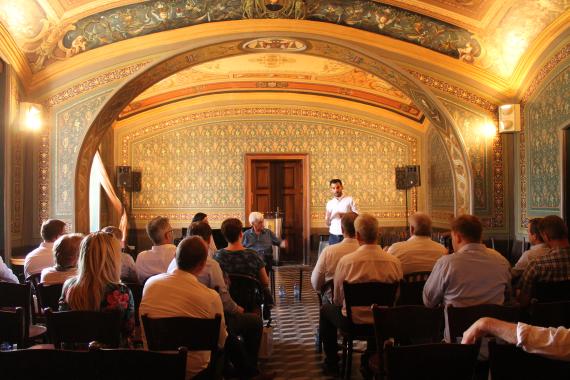 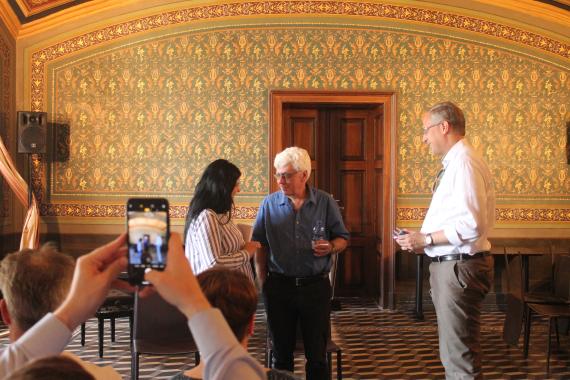 Subsequently, the KAS program began with a conversation with Sari Nusseibeh, a prominent, moderate, political figure from the Palestinian civil society who has been active for thirty years. He was a Professor of Philosophy at Birzeit, al-Quds and Hebrew University and for many years President of al-Quds University in Jerusalem. He also served as PLO representative in Jerusalem from 2001 to the end of 2002. In mid-2003, he co-founded the Israeli-Palestinian peace movement The People's Voice with former Shin Bet leader Ami Ayalon. After the conversation, it became clear that Nusseibeh no longer believes in the capability of Palestinians and Israelis in resolving the conflict. "Both peoples love the country too much in the same way". His plea went to the international community: "You are friends of both peoples, we need your support! Maybe you can show us the way towards a better future. Even if you sympathize more with one side, you need to help us both. "It is important for the resolution of the conflict that all people are treated as equal, regardless of whether one thinks about one state, two states or other alternatives”. Support, in his opinion, does not require money but moral solidarity. Sari also mentioned that extremism is an issue on both sides. Concerning the question of the one- or two-state solution, Sari believes that the two-state solution still remains the easiest to implement at the moment. In a few years however, if nothing happens, a common state might be the only solution to the conflict. Since 1967 and with the beginning of the occupation, the conflict and the situation for the Palestinians has been subject to constant deterioration and is also today by no means stable. In light of Israel’s new right-wing government, Sari suggests that one should not resign but instead continue to see the good in a person, even if there is hostility between you.  He is optimistic about the new Prime Minister of the Palestinian Territories, Mohammad Shtayyeh, who is a former student of his and with whom he is still in good contact. 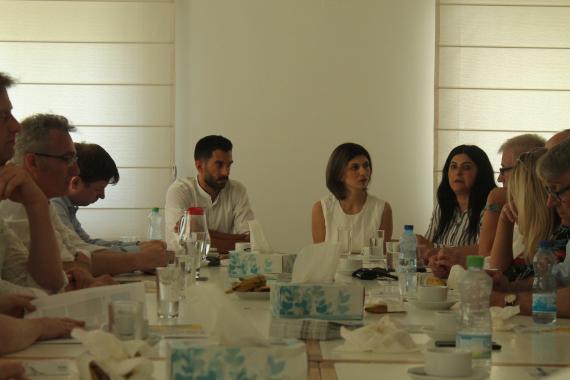 Nada Majdalani, the director of EcoPeace Palestine speaks to the delegation

After the very interesting conversation with Sari Nusseibeh, the group drove to Ramallah and was able to take a look at the separation barrier, the Qalandia Checkpoint and the refugee camps that lie between the checkpoint and Ramallah.

Upon arrival at the KAS office, the group met with Nada Majdalani, the Palestinian director of EcoPeace Middle East, and we were informed about the water and energy issues in the Palestinian Territories and the work of EcoPeace Middle East. EcoPeace Middle East is a regional environmental organization based in Ramallah, Amman and Tel Aviv and is dedicated to the work of transboundary environmental problems in the three countries. In the case of the Palestinian Territories, EcoPeace's main concern is access to water, the protection of common surface waters such as the River Jordan as well as water treatment plants. The latter in turn are related to renewable energy because of their high electricity consumption. Ms. Majdalani also described the situation in the Gaza Strip's water treatment plants which are unable to operate due to lack of energy. This causes some 90 million litres of untreated and unfiltered sewage to flow into the Mediterranean every day and due to the strong current, it reaches the beaches in Tel Aviv as well as one of the largest desalination plants in Israel. EcoPeace Middle East believes that shared resources such as water can act as a means for rapprochement and peaceful cooperation between the conflicting parties as well as between Israel and the Arab world as water and drought trespass national borders. It is because of this reason that EcoPeace Middle East and KAS are collaborating on a Water-Energy Nexus project that addresses the water and energy shortages in the three countries and pursues the idea of creating interdependencies through a mutual exchange of resources. 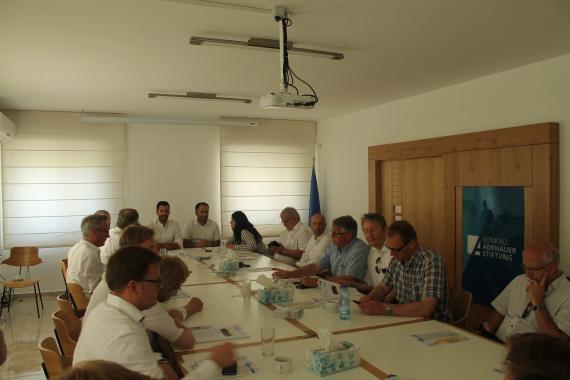 Afterwards the group spoke with Issa Amro. Mr. Amro is a peace activist from Hebron, a city in the West Bank. He is co-founder of the grassroots organization Youth Against Settlements and one of the most prominent Palestinian proponents of nonviolent resistance and civil disobedience to the Israeli occupation. In 2010, he was declared "human rights defender of the year in Palestine" by the United Nations High Commissioner for Human Rights. He is a member of the Israeli human rights organization B'Tselem and won the One World Media Award in 2009 with a film project in Hebron. Issa began his talk with a plea on freedom of expression which he sees as the foundation to all human rights work. He also mentioned his admiration for the German constitution and congratulated on this year's anniversary. The recently passed BDS decision in the German government was thus met with irritation by Issa as he sees the principle of freedom of expression threatened by the decision of the Bundestag. "I do not support BDS, but for me, the BDS campaign is a means of peaceful resistance which includes the boycott of settlement products from the West Bank.", Issa stated. In his opinion, the resolution was a slap in the face, because no distinction was made between BDS as a movement and the resistance against settlements and fanatics. For Issa, there can only be security for both sides if justice and equality become yardsticks for both sides; coexistence under occupation cannot exist. In Hebron, where one kilometre hosts 22 military checkpoints, those that hold European passports, for example, have more freedom of movement than a Palestinian who was born in the city. As a human rights activist, he is currently facing attacks from the Israeli as well as the Palestinian sides and must defend himself before an Israeli military court and a Palestinian court for his peace activism. He also explained to the group the differences in the procedural conduct: in front of an Israeli military court he must prove his innocence while in front of a civilian court of the Palestinian Authority (PA), the prosecution must prove his guilt. Matters of concern to him are also the attacks by the Israeli government on Israeli human rights organizations. Issa Amro was recurrently victim of the so-called price tag attacks. Out of this reason, the Israeli elections were a disappointment and a source of stress for him, as one of the politicians who is very close to the movement that is carrying out price-tag attacks in the West Bank will join the new government coalition. He is also worried about the Palestinian leadership, which has become increasingly authoritarian. At this point he emphasised the importance of elections and the responsibility of Germany (as one of the largest donors of development aid in the Palestinian Territories) to demand elections from the PA as well as condemn possible annexation plans of Israel. Mr Amro also spoke very critical of the American "economic-peace" approach, arguing that settlement activities have increased dramatically since the inauguration of Donald Trump.

Our last conversation was with Oliver Bridge who works as UNRWA's Protection Team Leader in the West Bank. Mr. Bridge briefed the group on the mandate as well as the work of the organization, explaining that UNRWA is providing to over 5.5 million refugees in the region today. More than 500,000 Palestinian children attend UNRWA schools and UNRWA employs about 30,000 Palestinian workers and a small corps with 2% international staff. The annual budget is approximately $ 1.2 billion, which has recently been a matter of great concern as the US withdrew from any funding, first partially in 2018 and in 2019 completely. Hence, the organization is working with a deficit of $ 360 million at the moment. In the West Bank, major problems include the occupation with the lack of movement as well as the disproportionate use of force (40% of men over 30 have been arrested at least once in their lives by the Israeli Military). The situation in general does not allow for decent development opportunities. Mr. Bridge also explained that the occupation of another people and country is in principle not illegal under international law, but laws and time limit it. In the West Bank the Israeli military maintains the occupation without an active war. The relationship between the military and the Palestinian population is therefore complicated, given that the military maintains the monopoly of force and would have to act as the police in most of the area, but considers the population residing in these areas as the enemy. Therefore, Mr Bridge's team meets with the Israeli security forces on a regular basis to discuss the situation and especially tries to find ways to reduce the amount of force. Successes have been noted in the Aida refugee camp in Bethlehem, for example, where the violence, most notably in form of tear gas, has been reduced significantly after the UNRWA-IDF consultation.

Many of the interlocutors were keen on talking about the recently passed BDS resolution of the Bundestag. Everyone made it clear that although they are not actively involved in the movement themselves; they deem it important that the goals of the BDS campaign are clearly differentiated. The campaign is directed against the Israeli military occupation. Sari Nusseibeh said, "I'm against occupation, so I resisted, I was in prison for it, but being anti-occupation does not mean I'm anti-Semitic. 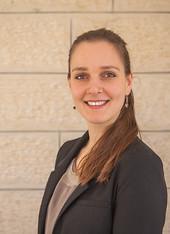