On 9 March 2011, a delegation of German lawyers visited the Konrad-Adenauer-Stiftung (KAS) in Ramallah
March 10, 2011 Ordering Information

As part of a two-week tour through Israel and the Palestinian Territories, a delegation of 6 lawyers visited Ramallah on 9 March, 2011.

The KAS Resident Representative to the Palestinian Territories, Felix Dane, welcomed the group at his office. He gave an overview about the political situation as well as the work of the KAS within the last years.

Afterwards, the group visited the Institute of Law (IoL) at Birzeit University. In a meeting with Dr. Ghassan Faramand, director, and other employees of the Institute, the participants were able to gain valuable insights into the Palestinian legal system and the problematic issue of overlapping legislation. Furthermore, several contemporary projects were introduced; including the judicial databank “al Muqtafi”, a product of the cooperation between KAS Ramallah and the IoL.

In the afternoon, the delegation paid a visit to the headquarter of the EU Police Mission EUPOL COPPS. In a meeting with the director of the “Rule of Law” section Nicholas Rodson, and the head of public relations Julio De La Guardia, the group was informed about the scope of the EU Mandate to the Palestinian Territories and related security topics.

After a final meeting with Mr. Dane at the KAS office, the group returned to Jerusalem. 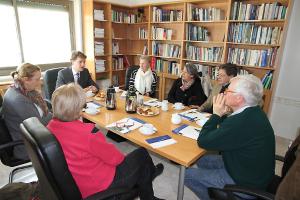 The delegation at the KAS office in Ramallah