The Konrad-Adenauer foundation received fourteen members of the group of women in the CDU/CSU faction of the German Parliament on 3rd February 2016 in the Palestinian territories. The visit focused on the exchange with representatives of Palestinian politics, economy and civil society regarding the future of the Israeli-Palestinian conflict and the role of woman in the Palestinian Territories.
February 8, 2016 Ordering Information 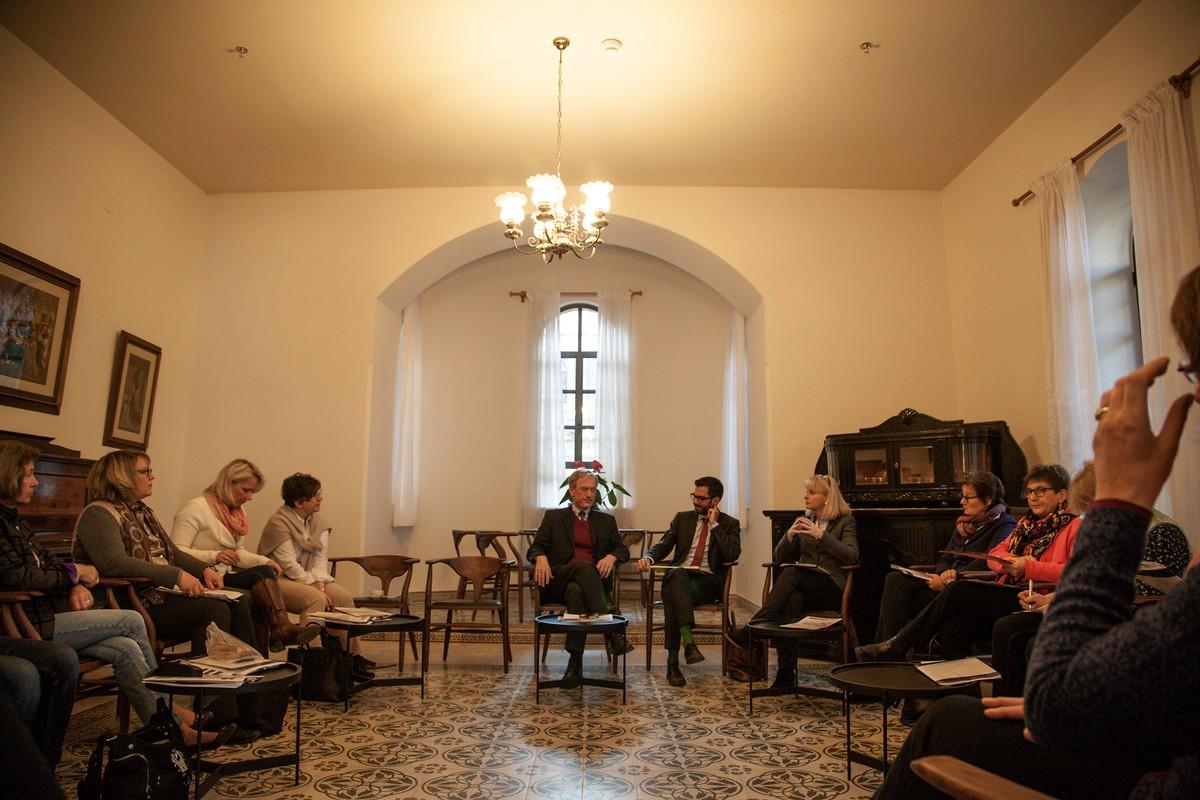 The program began with a joint briefing on the current political situation in the Palestinian Territories by the Resident Representative of the KAS Office in Ramallah, Marc Frings, and the Head of the German Representative Office, Peter Beerwerth, in the German Hospiz St. Charles in Jerusalem. The talk contextualized on one hand the increasing violence of the last months between Israelis and Palestinians and on the other hand the internal political tensions between Fatah and Hamas. Both described the political developments as very discouraging taking under consideration the stagnant peace process and the diminishing two-state-solution.

The following bus ride from Jerusalem to Ramallah was accompanied and commented by Isra` Muthaffur (UN OCHA). The trip took the group along the Israeli separation barrier via the checkpoint Al-Jeeb. Mrs. Muthaffur pointed out the deviation between the border of 1967 and the course of the barrier to show them the political realties on ground. The first stop in the West Bank was the UNRWA-highschool for girls of the refugee camp Al-Jalazon near Ramallah. There, the Members of Parliament met Felipe Sanchez (UNRWA-Director in the West Bank) and Yousef Hushiyeh, who explained to them the situation of the refugees, especially of the students. On the roof of the school the delegation had the chance to see the whole refugee camp and the nearby Israeli settlement Beit El. There, the German UNRWA employee Lydia Schnabel spoke about the girls' difficult everyday life.

Afterwards the group spoke to Dr. Hanan Ashrawi. Dr. Ashrawi was the first woman elected into the Palestinian National Council (PNC). Furthermore she was from 1991 to 1993 the official speaker of the Palestinian delegation in the Middle-East Peace Process and Member of the Executive Committee of the delegation. She described the origin and the development of the women`s movement in the Palestinian Territories and referred to the obstacles, women still have to face in order to gain political power.

In a subsequent lunch the Members of Parliament got the opportunity to exchange their ideas in small groups with five personalities from politics, economy and the civil society. In different roundtables Dalal Salameh (former Member of Palestinian Legislative Council), Amal Al Masri (founder of the Middle East Business Magazine), Dr. Bassem Khoury (former Minister of Economy), Ahmad Hanoun (Director of the PLO for refugee affairs) und Feryal Abdel Rahman (Director of women`s affairs of the President`s office) took part. The last talk in Ramallah was given by Dr. Sumaya Farhat-Naser, who outlined her struggles as a peace activist and stated in relation to this a failure of the political process. She also talked about Christian life in the Palestinian Territories and pointed out that it would need a policy, which should include every social group in this country.

Back in Jerusalem the delegation met with Dr. Bernard Sabella (PNC Member) to discuss the special significance of Jerusalem within the Israeli-Palestinian conflict. The Fatah Politician defined Jerusalem as actually two cities at the moment – one Palestinian in the East and an Israeli one in the West. However, he added that the primary aim must be a joint vision for city. After the meeting with Dr. Sabella the Members of Parliament had the chance to review the day`s events and discuss their different impressions over dinner.