Members of the German Landtag visit the Palestinian Territories

On October 4th 2016 the Konrad-Adenauer foundation welcomed a delegation from the CDU fraction in the Landtag of Baden-Württemberg. Led by former state secretary Georg Wacker the four members met with several actors from Palestinian Civil Society and Politics to gain a better understanding of the current situation. Additionally, the politicans had the opportunity to meet representatives of German Development Initiatives to get insights into Germany’s involvement in the Palestinian Territories.
October 5, 2016 Ordering Information 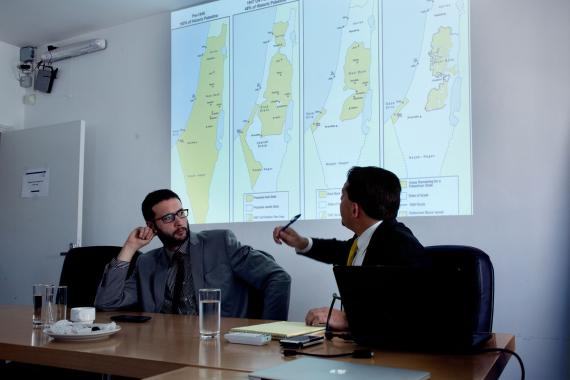 The delegation’s intensive program started in Bethlehem, with an introductory briefing about the political situation, held by Marc Frings, Resident Representative of the KAS Office in Ramallah. The briefing focused on the political and geographic division of the Palestinian Territories and it’s historic context. This discussion was exemplified by the subsequent drive to Ramallah alongside the separation wall and across two checkpoints.

In Ramallah, Dr Nabeel Kassis, former Minister of Finance and head of MAS, the Palestine Economic Policy Research Institute, received the delegation. Dr Kassis outlined the limitations and obstacles that the Palestinian Economy faces as a result of the ongoing conflict with Israel. Nevertheless he also emphasised the great potential embodied by an educated workforce and valuable resources existing despite the challenges.

Following the meeting the group had lunch with representatives of the German Agency for International Development and Cooperation and the German Representative Office. Together, the group discussed the current role of Germany as a main donor in the region.

Finally, the delegation gathered at the KAS office for briefing by Xavier Abu Eid and Abd Al Jawad Hamayel, two young policy advisors who informed the politicans about possible developments in the Israeli-Palestinian peace process.