On the 6th of February 2017, the Israeli Knesset passed a law to retroactively legalize settlement outposts in the West Bank. This controversial law was discussed in a lecture, organized by the Institute of Law (IoL) of the Birzeit University and the Konrad-Adenauer-Stiftung. Keynote speaker was Yousef Jabareen, a Palestinian member of the Knesset.
February 21, 2017 Ordering Information 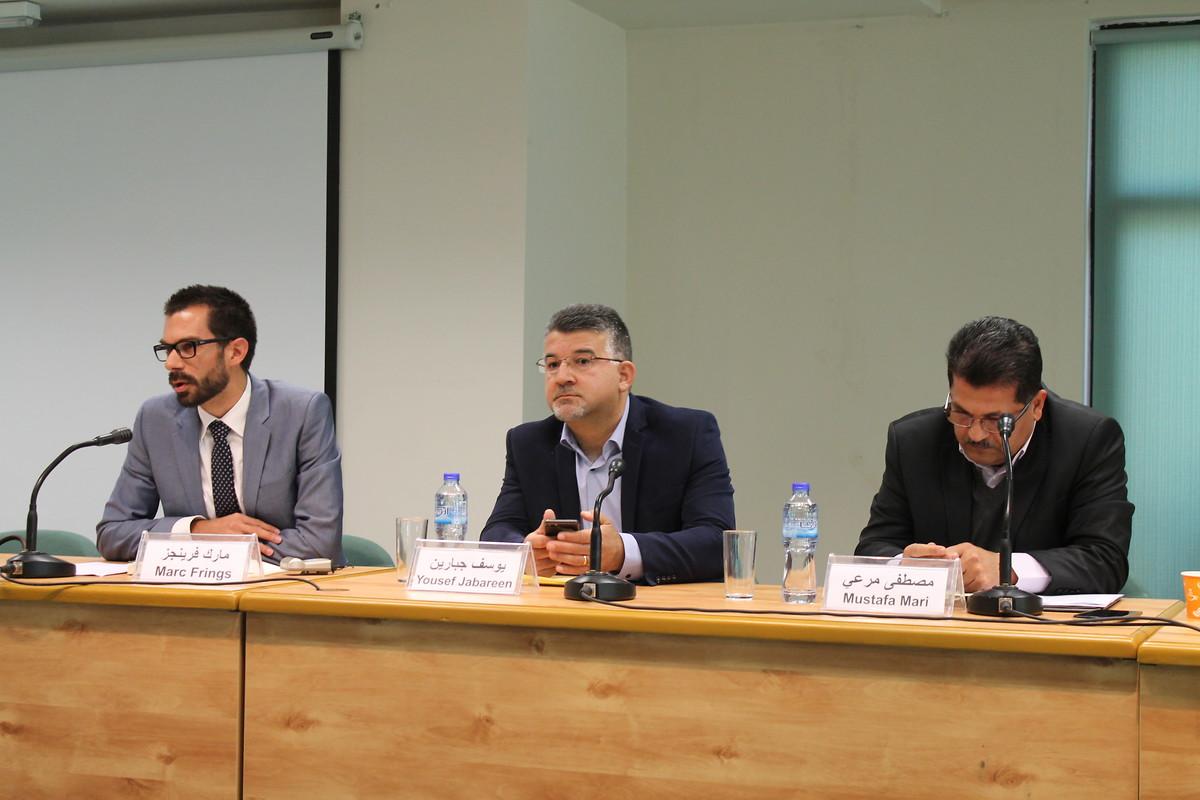 The “Regularization Law”, as the law is called officially, caused huge international attention. It aims to retroactively legalize settlement outposts that are illegal even under Israeli law. According to the New York Times, the law could retroactively legalize several thousand housing units in 16 settlements in the West Bank. The Palestinian land owners would in return receive compensation for their losses.

The law was discussed on the 21st of February 2017 at the IoL within the scope of the lecture series “Legal Encounter”. At the beginning, Marc Frings, Resident Representative of the Konrad-Adenauer-Stiftung in the Palestinian Territories, referred to the critical comments made by the German Government in regards to the law and Germany’s commitment to a two-state solution.

Yousef Jabareen, a Knesset MP for the oppositional “Joint List” (a political alliance of Arab parties) sees the law as part of a broader political and legal trend that affects Palestinians in a negative way. In this context he mentioned for example the “MP-expulsion Law” and the “NGO Law”. Jabareen criticized these developments sharply and warned about a possible loss of democratic standards in Israel, which would infringe upon Palestinian’s rights.

According to Jabareen, the Law has long-ranging consequences. It disregards the boarders of 1967 and diminishes the presence of the Two-state solution in the Israeli public discourse. This makes a peaceful coexistence impossible. He regards the law as a first step towards the annexation of the West Bank and warns that this could lead to a reality of apartheid.

Jabareen urged the Palestinian society to counteract these developments by peaceful protests. In addition, he asked for a broad initiative by the international community that entails concrete actions.

Upon request by the numerous participants, Jabareen stated that appealing to the Israeli High Court might not be the right strategy to cope with the law. This would imply recognizing all other settlements that are illegal under international law in addition to the fact that it might take years until the court reaches a verdict. The question of how to deal with the law was discussed very controversially. However, the participants of the “Legal Encounter” agreed that the law to retroactively legalize settlement outposts will have a negative effect on the relationship between Palestinians and Israelis.