Palestine and Israel: Future Perspectives in a Political Conflict Area

A group of students from KAS Scholarship Program visited Palestine for a 2-day program to learn about the political developments in the region. Our offices in Ramallah and Jerusalem joined the program that highlighted the current politics of the region and discussed future scenarios of the Palestinian-Israeli conflict.
March 25, 2018 Ordering Information

The delegation's program started in Jerusalem with a joint briefing by Director Marc Frings, and Dr. Joachim Rother from the Israel Office. The briefing focused on the role of KAS in Palestine and Israel, as well as the current political realities of the region. Later, the group went on a political tour through East-Jerusalem. Daniel Seidemann of Terrestrial Jerusalem provided them with information about current changes in the geopolitical landscape of Jerusalem and their impact on the future of the two-state solution. The program then presented an interesting prespective about life in East Jerusalem, which is the Palestinian Christian prespective. Therefore Nora Carmi, a Palestinian Christian from the city, spoke about Christian life in Palestine especially in Jerusalem and the role of the churches in the Holy Land.

The next day, the delegation visited Ramallah and met with Joseph Hinterseher from the German Representative Office. He outlined the German involvement in the Palestinian Territories and Germany's position vis-a-vis the Israeli-Palestinian conflict. Afterwards the students had the opportunity to meet Dr. Amal Jadou, Head of the European Department, at the Ministry of Foreign Affairs. Dr. Jadou gave an overview of the current focus of Palestinian foreign policy and the diplomatic relations with Germany and other Western countries. She also spoke about the change in US-policy and its impact on the peace process.

The political talks were completed by meetings with representatives from the Palestinian private sector and civil society. Reem Qawasmi, CFO-in-Residence at the Palestinian Venture Capital Fund (Ibtikar Fund) spoke about the growing Palestinian start-up scene and its biggest challenges. Later, Salem Barahmeh joined the group and presented the work of the Palestinian civil society, especially The establishment and mission of the Palestine Institute for Public Diplomacy that promotes everyday stories of Palestinian life in the Territories to people abroad.

Palestine and Israel: Future Perspectives in a Political Conflict Area 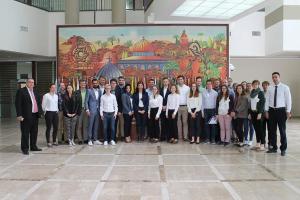 KAS scholarship holders after a meeting with Diplomat Amal Jadou 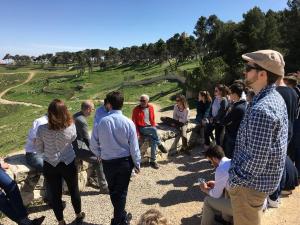