The International Politics Of Sudan’s Transition

Sudan is in the midst of a once-in-a-generation episode of change. This ethnically diverse country of 42 million people is undergoing a rare political transition after a revolutionary uprising and a military coup last year brought an end to President Omar al-Bashir's 30-year rule. In August 2019, Bashir's generals and the leaders of opposition parties agreed to share power in arrangement meant to lead the country to a new constitutional order and free elections in three years. A peace agreement finalized on 3 October 2020 saw the leaders of armed groups from Sudan's war-torn areas of Darfur, Blue Nile and Southern Kordofan join the transitional institutions. But the economy has collapsed in a spiral of near hyperinflation, and the prospects for further destabilization are rising. Regime change has brought a significant reorientation of Sudan's foreign policy, once fiercely anti-Western and supportive of Islamist groups across the region. Relations with Europe, long fraught as a result of the International Criminal Court Indictment of Omar alBashir for war crimes, crimes against humanity and genocide in Darfur, are edging towards full normalization. Sudan has also moved away from its erstwhile allies Qatar and Turkey, largely aligning onto the "Arab Troika" (Saudi Arabia, the United Arab Emirates, and Egypt). Under the influence of the UAE, Sudan is now exploring a potential normalization with Israel in exchange for a recission of the United States' longstanding State Sponsor of Terrorism Designation.

Mediterranean Women Digital Summit for women empowerment Held every year in Tunis, the Mediterranean Women Digital Summit gathers activists, entrepreneurs as well as academics from countries of the southern Mediterranean region but also from Europe. This platform aims at exploring the opportunities digitalization offers to women empowerment. This year’s edition will focus particularly on the gender imbalance observed on the Internet space, as it is the case in society at large. Through a set of panel discussions and peer consultations, the objective is to construct a reflection process on how social innovations can contribute to make the Internet a more gender-equal place. The target outcome of the Mediterranean Women Digital Summit is to create a network of inspired women and provide them with knowledge and experiences from successful initiatives. With the opportunities brought by the digital sector, those emerging women leaders will be better equipped to contribute with their own innovations to a more sustainable and inclusive development in the Southern Mediterranean

After 50 young civil society activists from the Middle East and North Africa (MENA) have completed the first and second MENA Leadership Academies, the Regional Program South Mediterranean of the Konrad-Adenauer-Stiftung (KAS) is now bringing together the third generation of motivated and committed future leaders after together. The theme for the next two years will be how civil society organizations can successfully accompany the digital transformation process in the region. The first training course will take place in Tunis.

Civil-Military Relations in the Middle East and North Africa

During the latest popular protests the MENA region is witnessing, military apparatuses have been playing a decisive role. While in some countries, the military took the role of defending the political establishment, in other cases, the army played a crucial role in the change of power. In the face of the major re-implication of the military in the political developments of the MENA region, the Konrad-Adenauer-Stiftung Regional Program South Mediterranean in cooperation with the Carnegie Middle East Center, organized a conference on the “civil-military relations in the MENA region”.

In early 2020, Tunisia started a two-year mandate, for the fourth time, as a non-permanent member of the Security Council (UNSC) until 2022.

In addition to this election, Tunisia chaired the Arab League Summit last year and will chair the Francophonie Summit scheduled for December 2020. In view of Tunisia’s significant growing exposure on the international scene, the KAS Regional Program South Mediterranean held a conference to provide food for thought on the opportunities that Tunisia's election to the United Nations Security Council brings.

As migration management has been stuck in “crisis mode” for a long time, it is now urgent to reflect upon longer-term responses. Given the relevance of local institutions in the implementation of migration and integration policies, the question of legal pathways can also only be realistically addressed by involving in the discussions officials and policymakers working at the local level – from origin countries, as well as from transit and receiving communities. For this reason, the Regional Program Political Dialogue South Mediterranean of Konrad-Adenauer-Stiftung (KAS) in cooperation with the Italian Institute for International Political Studies (ISPI) is organizing a forum on legal pathways for migration.

Foreign Aid in the Middle East and North Africa

This international conference, organized by the Regional Program Political Dialogue South Mediterranean of the Konrad-Adenauer-Stiftung (KAS) and the Mediterranean Academy for Diplomatic Studies (MEDAC), aims to map the new trends, patterns and priorities of foreign aid assistance as well as their objectives and impacts for the regional development of the MENA.

Seminar of the European Fall Academy

About thirty young social activists from the central Maghreb will take part at the European Fall Academy that the KAS Regional Program South Mediterranean organizes for the third time at the European Academy of Otzenhausen (Germany).

This panel discussion seeks to review how to reset the debate on EU-North Africa relations and how to adjust to the demands and expectations on both sides following a recently edited volume on "The European Union and North Africa: Prospects and Challenges". 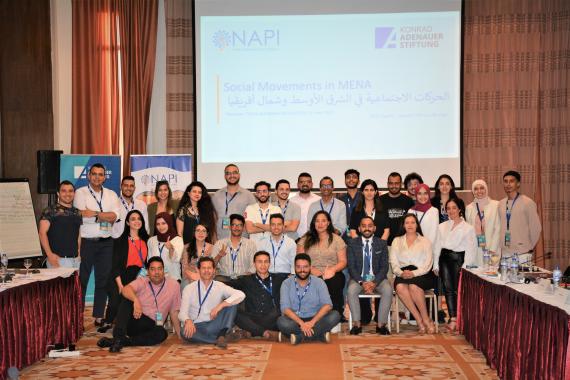 The basics of democratic participation through CSOs and political parties

The Regional Program Political Dialogue South Mediterranean of the Konrad Adenauer Stiftung held the first of four training sessions for the MENA Leadership Academy 4th cohort, entitled: The basics of democratic participation through CSOs and political parties, in Tunis from June 13 to June 17. 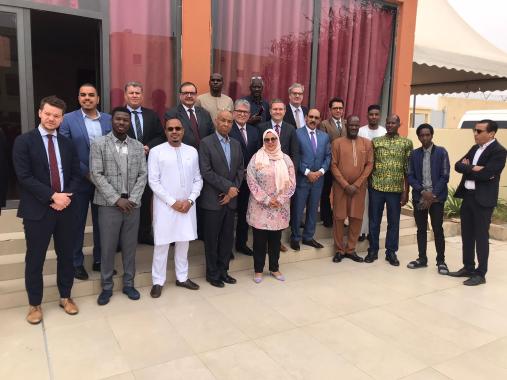 Criminality, radicalization, violence and actors’ positioning in the Sahel and Maghreb regions 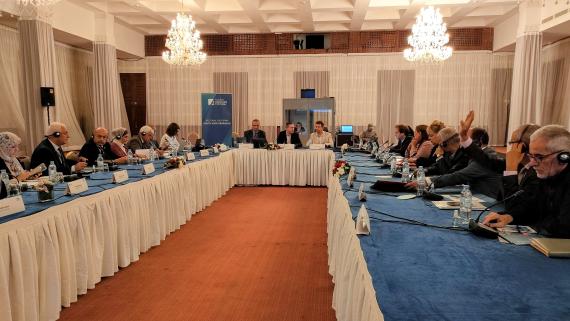 KAS PolDiMed, in partnership with the Mediterranean network of cities MedCities, organized a seminar in Agadir, entitled “Local authorities and bankable urban transformation projects: accessing international funds”, which took place between 17 and 18 May 2022. 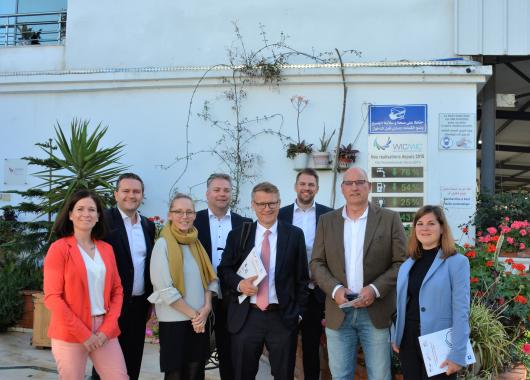 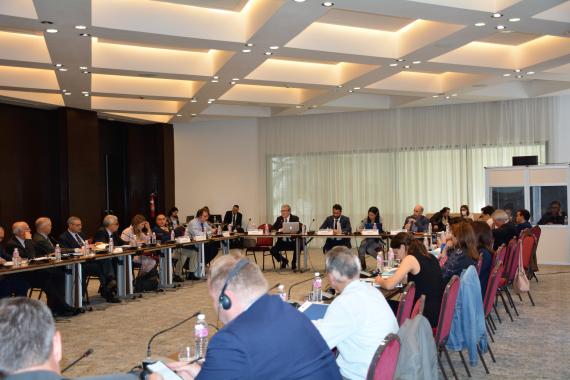 The Regional Programme Political Dialogue South Mediterranean of the Konrad Adenauer Stiftung (KAS PolDiMed) and the Mediterranean Foundation for Strategic Studies (FMES), co-organized a regional conference entitled: “The Euro-Mediterranean security architecture in the light of Russia’s invasion of Ukraine”. The event took place on May 12th, 2022 in Tunis. 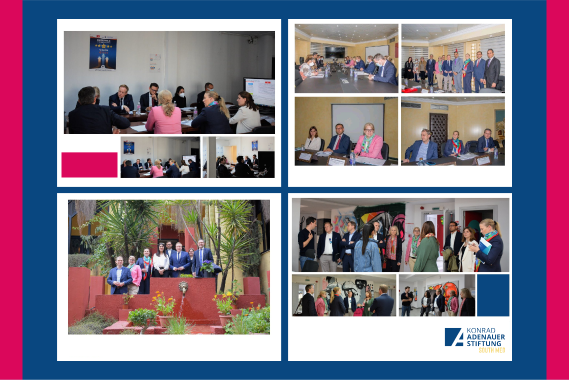 A decade after the Arab Spring Where does Europe's southern neighborhood stand today? 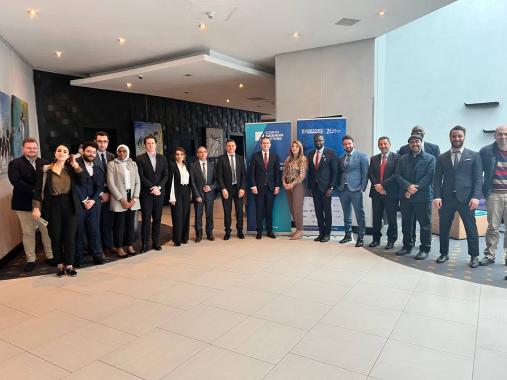 The Regional Programme Political Dialogue South Mediterranean of the Konrad Adenauer Stiftung (KAS PolDiMed) and the Union of the Mediteranean Confederations of Enterprises (BUSINESSMED) co-organized a regional conference, entitled "South-South Regional Integration: A way forward to a sustainable economic recovery post-Covid19". The event took place on 16 March, 2022 in Casablanca. 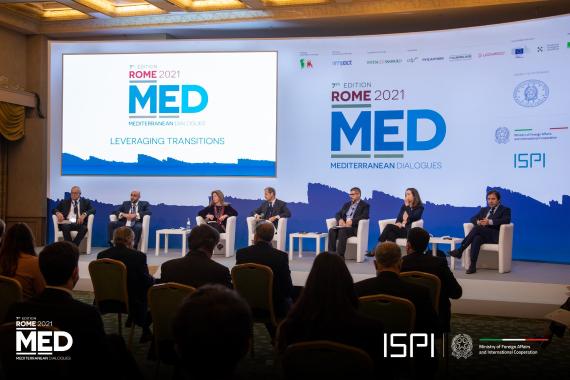 Libya at the Crossroads: What Europe and the International Community can do

This panel, organized in the framework of the Rome MED Dialogues, represented the final phase of the Libya Proxy War Network project developed by the ECFR Rome Office with the support of the Regional Program Political Dialogue South Mediterranean of the Konrad-Adenauer-Stiftung (KAS PolDiMed) and the Italian Ministry of Foreign Affairs and International Cooperation. This initiative, inspired by the practice of track-two diplomacy, consisted of several closed-door meetings attended by scholars and analysts from the countries most engaged in Libya. The panel discussion at the Rome MED dialogues was well featured with renowned experts and practitioners Stephanie Williams, Jose Sabadell, Tarek Megerisi, Galip Dalay, Mary Fitzgerald, and Giampiero Massolo. 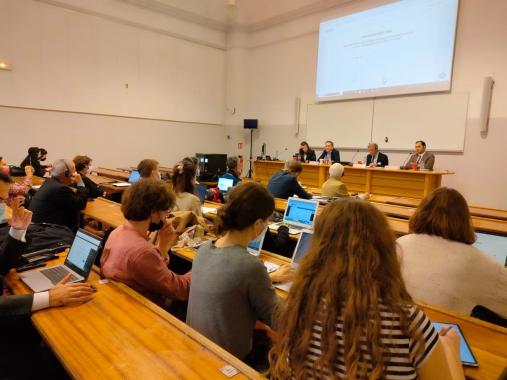 10 years after the Arab revolutions

The Konrad Adenauer Stiftung organised, in partnership with the political science university of Aix-en-Provence (SciencesPo Aix) and Aix Marseille University’s Institute for Advanced Study (IMéRA), the 4th edition of the Franco-German Mediterranean forum. This year’s edition was entitled “10 years after the Arab revolutions” and was organised at SciencesPo Aix, from 24 to 26 of November 2021. 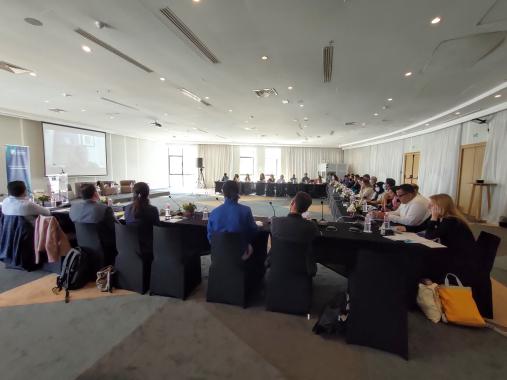 On 26 October 2021, KAS PolDiMed organized, in partnership with the University of Sousse and the Municipality of Sousse, a conference on migration in North Africa in Sousse.