The report finds "Hong Kong faces its own share of threats from climate change, yet it is far from achieving its responsibility towards the Paris Climate Agreement goals."
June 24, 2019 Ordering Information

The COP21 Paris Agreement on climate change of December 2015 committed 195 national states to the goal of limiting average temperature rise to 2 degrees Celsius in comparison to the pre-industrial era. The successful ratification of the international accord requires joint actions by multiple stakeholders at all levels. Subnational actors including cities have significant potential in mitigating the causes of and adapting to the impacts of climate change.

In December 2017, with the support of KAS RECAP, Carbon Care Asia launched the "Paris Watch" project, which aims at helping accelerate climate action in Hong Kong and similar cities around the world. The initiative involves presenting information in the form of a Report Card to assess the performance of Hong Kong on crucial elements of the Paris Climate Agreement. This initiative further tries to encourage by benchmarking and ranking Hong Kong against comparable cities.

The project also involves a vital communication about climate change performance with the public and media, creatively using graphics and social media. 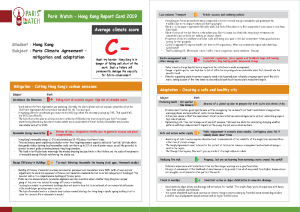