The Paris Agreement and the following discussion processes have highlighted the urgent need of the global community to develop mechanisms of compensating Loss and Damage (L&D) caused by climate change. Opinions differ widely as how such compensation shall be designed. KAS RECAP and the Potsdam Institute for Climate Impact Research (PIK) have published a policy paper featuring innovative solutions.
September 11, 2017 Ordering Information

Mitigation and adaptation to climate change are the two pillars of global climate politics. These issues have been considered widely in national climate strategies. An equally important questions however is not yet answered: How shall a compensation for states and (groups of) persons whose livelihood is threatened by the impacts of climate change be implemented? The best known example are small islands in the South Pacific which will submerge in the rising sea level. But climate induced migration is also part of this problem.

These challenges have for a quite long time been subject to the discussions of scientific and financial experts. Different models have been developed so far. However, important legal and financial aspects are still unsettled and disputed. What is the current state of discussions? Are there already first projects from which chances and limits of such instruments can be derived? Which role can insurances play in contrast to other financial instruments?

After introducing the basic idea of Loss and Damage regulation, the paper identifies the main issues remaining to be resolved. It then addresses these questions by comparing existing models and new concepts. Finally it draws several conclusions of how all involved stakeholders – development banks, financial and insurance institutions, policy makers and local communities – can deal with climate induced damages and a necessary large-scale ways of compensation.

The paper has been drafted upon the discussion and findings of a joint conference RECAP and the Potsdam Institute for Climate Impact Research (PIK) have conducted on 17 and 18 February 2017 in Hong Kong SAR, China. The more than 20 renowned international experts from various fields had elaborated innovative concepts for a sustainable future L&D policy. 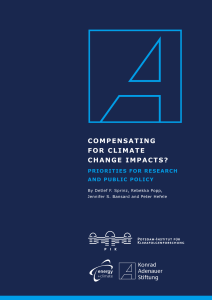