Competition for natural resources is an important factor in intensifying geopolitical conflicts. RECAP together with Chatham House is co-organizing an international workshop on “Resources, Sovereignty and Geopolitics” on 26-27 May 2016 in Hong Kong.
May 26 - 27, 2016 14.30 - 18.00 Clock

Access and distribution of natural resources play an increasingly important role as sources of competition and conflict, especially in the context of rapidly developing economies, where economic growth has led to considerable increases in demand for resources. In Asia these pressures are exacerbated by numerous disputes over sovereignty, leading to conflicting or unclear expectations from states over territories and their resources. Competition over resources thus have the potential to drive both diplomatic tension and outright conflict. A number of recent defence white papers from Asian countries cite either the need to secure resources or the likelihood of conflict over the control of resources as a factor in increased defence spending.

The interaction between resources and geopolitics is complex, however, and is mediated through a range of ideological, institutional, political and economic contexts. The need for resources may drive countries do pursue territorial claims. Resource extraction may equally well be a means to further territorial ambitions through staking a claim in a disputed area. In other situations, resource nationalist rhetoric surrounding territorial disputes may primarily reflect domestic political debates.

Understanding the intersections of natural resources with sovereignty issues is important not only to avoid competition for resources leading to conflict between states. It should also prevent destructive narratives about resources by creating unnecessary flashpoints in the context of existing tensions. The aim of this workshop is to bring together experts from across Asia, Europe and the USA to discuss the challenges around natural resources as drivers of conflict.

Ways towards a peaceful and sustainable use of natural resources in Asia: Workshop “Resources, Sovereignty and Geopolitics”
May 27, 2016
read now
Contact 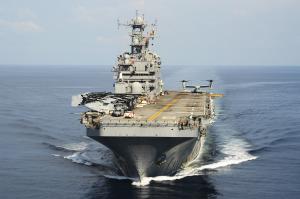 Flickr, Creative Commons\r\nhttps://www.flickr.com/photos/compacflt/15000412984/in/photostream/
Territorial disputes in the South China Sea are straining relationships between China and other countries in Southeast Asia.