Digitalisation offers great opportunities for the energy sector to become more efficient and sustainable, but it also bears security risks. During a study trip, experts from Asia will learn about the current challenges and strategies in Europe.
October 4, 2018 Ordering Information 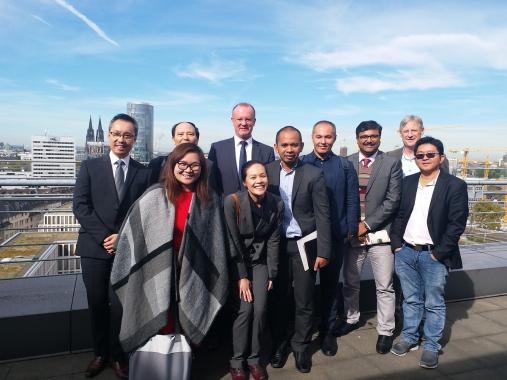 As part of a study trip organized by Dr. Peter Hefele (Director of KAS RECAP), eight energy policy experts from the Asia-Pacific project region from a range of political institutions, cooporations and think tanks came together in Brussels, Bonn/Cologne and Berlin to discuss the German ‘Energiewende”. Numerous presentations and discussions with politicians, business leaders, government officials and scientists presented the participants with a comprehensive picture on the complex challenges which faces Europe and Germany in the midst of the Energiewende. However, these national and regional challenges regarding energy supply are also of hot debate in the home countries of Asia. In addition to the introduction and enforcement of renewable energies, digitalisation is putting existing framework conditions and business models under considerable pressure to adapt. At the same time, there is a geopolitical power shift through the rise of, for example, the People's Republic of China or India.

The discussions in Brussels focused on the regulatory framework and the currently planned changes at the European level. After all, energy and climate policy has become one of the core competences of the European Union. The EU Commission's new Clean Energy Package aims to set new ambitious emission reduction and energy efficiency targets.

How energy policy stakeholders are involved in these decision making processes was demonstrated by the presentations and discussions with key energy and digital policy stakeholders. As an introduction, Lasse Böhm from the Working Group on Business and Environment of the European Parliament, reported on the ongoing discussions on the future energy and digitalisation guidelines of the European Commission. The protection of critical infrastructure plays an increasingly important role, not only in nuclear installations, but also in all energy networks, as representatives of E-Euratom safeguards impressively demonstrated.

When formulating the European guidelines, industrial lobbying plays a key role. Using the example of the Council of European Energy Regulations (CEER) and the European Digital SME Alliance, the participants received a good impression of how to initiate and shape political processes in a multi-level system such as the European Union. This is vastly different from policies found in Asia, where usually only the national level matters.

Energy companies are currently experiencing a massive change in their business. This applies both to the producers, but equally to the network operators. Visits to one of the largest German network operators, Tennet, and Dutch-German Start-up Company for "virtual power plants", Next Kraftwerke, depicted the challenge for established companies. It also showed the innovation potential of new approaches when it comes to the integration of renewable energy and the digital control of transnational networks, as well as the use of smart metering.

The project "Smart City Cologne", introduced by its director Reiner Gottschlich, showed the participants how a sustainable energy transformation can be practically implemented on the level of German cities. In addition to renewable energies, the transformation of mobility and urban forms of settlement play a key role.

In Berlin, in talks with the members of the German Bundestag, Maik Beermann, and Carsten Müller, the groups gained insight into how the ambitious project "Energiewende" can be coordinated across the board and how public acceptance can be ensured. Digitalisation is opening up new business fields, especially in Germany. But it also became clear that both the technical infrastructure has been massively expanded as well as the legal framework conditions, e.g. in the protection of private data. Bernd Weber (Economic Council) and Jasper Eitze (coordinator Energy, KAS) presented the Energy Lab 2030 as an example of how energy policy concepts can be developed in innovative ways.

The example of the transport sector showed how energy and climate policy goals, digitalisation and the technical innovation capability of Germany can be linked.

A visit to the TenneT Virtual Vision showroom gave the group the opportunity to interactively simulate the behavior of power grids under the influence of renewable energy and smart digital control.

For their part, the participants were able to provide European interlocutors with experiences and challenges from their home countries. In some cases similar starting points from stakeholders were identified, for example in the (de-) regulation of markets or better regional integration of networks. On the other hand, it is precisely the developing countries that first have to ensure that basic services continue to be supplied to other parts of the population, particularly electricity, as the most important contribution to social development.

The study trip has made an important contribution to a deeper understanding of the central importance of sustainable and digitalised energy systems in Europe and Asia. It also allowed participants to network and develop new ideas for projects in the Asia-Pacific region.

Digitalisation in the energy sector