The Case of Climate Negotiations and Climate Finance

The workshop “International NGO’s in Global Governance: The Case of Climate Negotiations and Climate Finance” was held on the 6th of March in the Faculty of Law in the Chinese University of Hong Kong. The Konrad Adenauer Foundation RECAP and the Chinese University of Hong Kong CUHK invited representatives of local and international NGO’s, professional and academic experts as well as students of international and environmental law.
March 7, 2019 Ordering Information

The role and status of International Non-Governmental Organizations (INGOs) in global politics, in particular in climate negotiations and green finance is among the most remarkable developments in the last decades in international politics.

Dr Rio HOWARD, a former official of the OECD in Paris/ France, presented a sharp and critical analysis on the topic of international NGO’s in global governance and their special role in climate negotiations. Non-state actors offer a variety of resources, expertise and knowledge, which states can no longer offer and are therefore highly requested by states. In the fight against climate change, international NGO’s are an essential part of further progress to achieve emissions reduction goals. After the Paris Agreement COP 21 in 2016, funding the green transitions remained a huge problem. It is largely the private sector, which had to mobilize capital and thus the inclusion of other parties was inevitable. As the amount of NGO’s increased, their role in the international sphere began to change. With more international influence, INGOs started to create their own agendas and campaigning – raising the question, whom they are representing. The status of INGOs in international law is still not well defined as, traditionally, only sovereign states are considered as actors in the global arena. This lack of legal personality hinders their ability to act.

To make green funding more efficient and adapted to the needs of local communities, the topic of the governance of the Green Climate Fund (GCF) has become urgent, as Dr Maria HUIDOBRO-FRANCESCH showed in her presentation. The GCF is the most prominent platform investing in lowering greenhouse gas emissions and supporting global mitigation and adaption efforts, especially in developing countries. INGOs gained an important role in the GCF, as they translate those global norms into local context and help to answer the basic question in climate finance: Who is paying what, when and how?

In Asia, the Regional Structured Dialogues in Bali (2017) and Da Nang (2018) constituted the governance of the GCF in Asia by including important non-state actors in redefining the instruments of GCF.

The presentations were followed by a panel discussion, which focused on the question of whom NGOs really represent. The critique was that often the most vulnerable and less articulated members of society are left out. Further, two-thirds of all INGO’s are based in English speaking countries, only 10% are in African countries.
A further core topic was the impartiality of non-state actors. How big is the influence of the donors of an NGO with regard to their decisions? Transparency through international standards is very important with respect to their effectiveness and legitimacy. This is particularly a challenge for governmental funded NGOs (GONGOS) and interest-group funded NGOS. 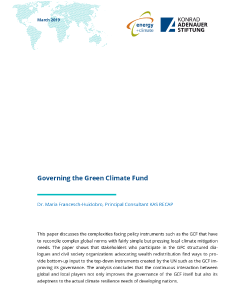