The upcoming UN climate change conference COP21 in Paris was an important milestone for developing global sustainable climate politics. Over 50 international students simulated the climate negotiations at an event organised by KAS RECAP and the Hong Kong-America Center. In a first part of the workshop, climate experts and diplomats presented the position of their countries in regard to climate politics. As a second step groups of students representing different "countries" drafted position papers and presented them to the plenum to achieve a global compromise on a new climate change regime.
October 30, 2015 Ordering Information RECAP
Students with various backgrounds concerning both study subjects and nationalities participated in the kick-off event. RECAP
The contribution of high-ranking officials and experts is a decisive point for the success of the simulation game. Clifford Hart (l.), Consul General of the USA to Hong Kong and Macau, and his Indian colleague, Prashant Agrawal, Consul General of India. RECAP
The venue at the Law School of the Chinese University of Hong Kong created a "UN like atmosphere". RECAP
As a former Senior UN Official Frank Joshua is an expert on climate negotiations. RECAP
After a long day of specialist input by experienced diplomats and country representatives, the students met in their groups - each representing a particular country. The task: to come up with a first draft for their country's position towards the climate conference COP21. 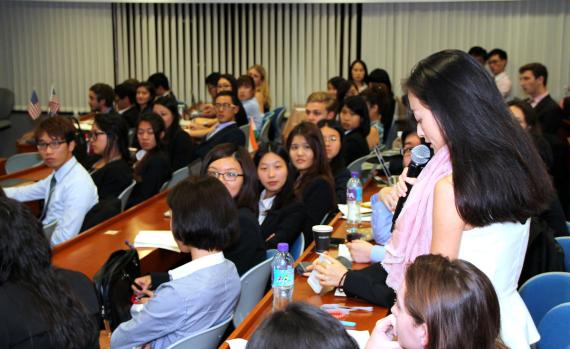 RECAP
After the group work, first results were presented. The "Conference" focusing on China's position, offers and requests. RECAP
Morton Holbrook, Director of the Hong Kong America Center and an experienced former US diplomat himself. 0
Students were preparing for the conference. 0
Country delegates spoke for their stances before each discussion. 0
Country representatives voted upon motions and amendments of the agreement. 0
Students passed a final resolution of the climate change agreement by consensus at the end of the two-day debate. KAS/RECAP
After the simulation game, student participants met the Government officials to hear their views on COP21 result in this panel discussion. KAS/RECAP
Representatives from Europe, the United States and Hong Kong discussed what has been achieved from COP21 and how countries can collaborate 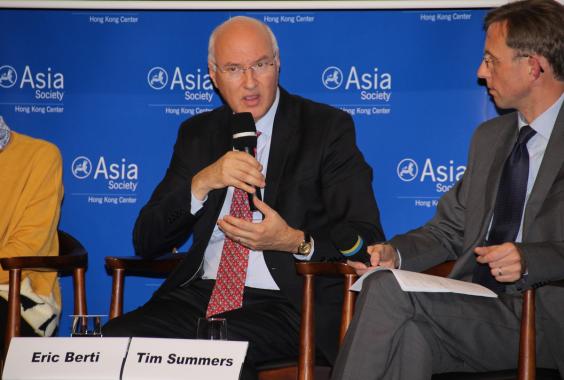 The Regional Project Energy Security and Climate Change in Asia Pacific of KAS (RECAP) together with the Hong Kong America Center organises a simulation game to give more than 50 students from different universities of Hong Kong and Macao an opportunity to understand international climate negotiations better and to develop their own ideas.

The participants students try to agree an different views and objectives and to finally agree on an joint action plan binding for all countries - similar to the aim of COP21 in Paris in 2015. The participants do not only gain professional insights in the current global climate politics and diplomacy, but acquire also practical argumentation and negotiation skills.

The workshop is organised in three parts: a professional preparation, the actual two-days simulation of negotiations and a review which compares the results to those of the real UN climate conference. Nine students groups had been formed, which represent the economically and politically most important countries of different world regions. On 24th October 2015, the workshop started with an introduction by high-ranking diplomats of almost all countries represented in the workshop. They provided the participants with background information about the positioning and expectations of their respective governments in preparation of the COP21 conference in Paris. These insights were complemented by presentations of climate experts from academia and consulting who presented necessary measures to mitigate (and adaptate to) climate change.

Frank Joshua, a former high-ranking UN staff member in trade and climate negotiations, reported his first-hand experience on climate diplomacy since the Kyoto protocol in 1997. The deputy consul general of the COP21 host country France, Lilas Bernheim, explained on the preparation towards the climate summit December in Paris, including insights in the climate politics of the EU and and France.

In his presentation the German consul general Nikolaus Graf Lambsdorff illustrated the ambitious and comprehensive goals of Germany´s "Energiewende" ("Energy transition"). His Indian colleague, Prashant Agrawal, emphasised that the society and culture of India had always attached great importance to the protection of environment. The government of the world's third largest CO2 emmittant is investing ambitiously in climate friendly infrastructure - for example the first international airport which is excusively run by solar energy. The consul generals and experts from China, Bangladesh, Japan, the Philippines and the United States also explained their countries` position.

After the presentations, the students began first discussion among themselves on how to proceed during the upcoming two-days simulation game. A short position paper was presented to the plenum as a draft conclusion of the day. It already became apparent that the countries will set very different focal points of interest and expectations are wide:

The "delegates" of the EU pointed to their hitherto achievements and their ambitious climate political goals and called upon other developed nations for stronger efforts. The US stressed the responsibility of less developed countries. Those again pointed to the hazard caused by the impacts of the climate change. Regarding their low economic development level, they asked for massive technical and financial support from the industrial nations. The "delegates" of the Philippines planned to use their financial means primarily for adaption to the inevitably rising sea level and saw measures to mitigate climate change as second priority. China reminded the other countries of its recent promise to lower emission rates. Russia on the other hand pointed to the role of its vast forests which play an important role in CO2 sinking.

Much attention has been drawn on the negotiations between national states, whether they are able to build consensus and create an agreement on mitigation and adaptation of climate change. The past history has shown negotiations were not necessarily smooth and their effectiveness is subject to different factors. The two-day simulation activity of students, organized by the Hong Kong American Center and sponsored by the Regional Project Energy Security and Climate Change Asia-Pacific, Konrad-Adenauer-Stiftung, has obviously reflected this reality.

Local and international students with various study backgrounds engaged in an intensive discussion similar to UNFCCC negotiations via playing the roles of countries including Bangladesh, Saudi Arabia, China, Japan, the USA, the EU, Philippines, India and Russia. Taking account of the countries’ actual circumstances, the negotiation aims to formulate a treaty of outlining stances of countries in handling climate change. Participants started each discussion on mitigation, adaptation and finance after presenting their countries’ positions. No one denied the significance and necessity to take timely action in response to the changing climate. However, views were apparently divided among the country representatives, when it comes to the concrete issues of the target of temperature goal, the differentiated responsibility of developed and developing countries and the amount of financing assistance for underdeveloped countries. Despite this, at the end of the conference, a final resolution has been made and passed by all participating delegates after several rounds of voting and amendments on terms.

In general, the simulation has enabled students to gain insights into and experience the negotiating and decision-making process of the international regime of climate change. In addition, it enhances their practical skills of public speaking and debating and strengthens their teamwork and leadership abilities. They do hope their voices will be heard by decision makers, with the belief that as stakeholders of the society, they have the responsibility to contribute to climate change issues by influencing the climate negotiations via a bottom-up approach.

The concluding event of the COP21 simulation series was a panel discussion of Government representatives and foreign diplomats on the result of Paris Climate Change Summit on December 15, 2015. The debate was hosted by the Asia Society Hong Kong Center and supported by the RECAP, Konrad Adenauer Foundation, the Hong Kong America Centre and the Consulate General of France in Hong Kong & Macau.

The discussion was attended by more than 70 people including students who have been participating in the simulation series. The distinguished panel speakers included Ms. Christine Loh, Under Secretary for the Environment in Hong Kong, Mr. Vincent Piket, Head of Office of the European Union (EU) in Hong Kong and Macau, Mr. Nikolaus Graf Lambsdorff, Consul General of Germany in Hong Kong and Macau, Mr. Eric Berti, Consul General of France in Hong Kong and Macau and Mr. Frederic Maerkle, former counselor for Environment, Science, Technology and Health at the US Embassy in Paris (via Skype). The event was chaired by Dr. Tim Summers, Senior Consulting Fellow with the Asia Programme of Chatham House.

The discussion looked into the implications of the Paris agreement for countries and cities. The panelists, representing their respective countries and city agreed that the Paris outcome was a historical achievement of the yearly climate change conference after signing of the Kyoto Protocol. The COP21 agreement is the first legally binding accord to tackle changing climate. It revealed the importance of climate change in the global political agenda and facilitated more climate action via a bottom-up approach. Over 195 countries, accounting for more than 95% of global emissions, submitted their national climate action plans (INDCs), which outline their concrete measures on mitigation, adaptation and resilience in climate change. Significantly, they have promised to renew the strategy plans every 5 years in order to keep global warming below 1.5 degree.

Overall, the outcome of the Paris climate summit was positively recognized by the panelists. Several factors were highlighted during the debate. First, countries recognize the importance to address climate change without further delay. Second, France has played a central and successful role in coordinating countries during the COP21 negotiations to ensure fruitful and constructive outcomes of the conference. Lastly, the common stance on climate change, reached between USA and China before the COP21 conference, has encouraged other developing and developed countries to actively participate in the negotiations.