A unique mixture of traditional and modern elements

There are only few places in the world with a similar mixture of traditional and modern elements within society and such cultural plurality as you encounter in Abu Dhabi. This is what I discovered during my three months internship at the regional office of the Konrad-Adenauer-Stiftung in Abu Dhabi this spring. And it was these regional distinctions that made this internship so special.

First appearance at most successful Book Fair in Abu Dhabi

On Sunday the 20th Abu Dhabi International Book Fair came to a close with a record number of visitors and exhibitors. More than 230.000 visitors, 367 exhibitors from 60 countries and record sales of over US $10 million made the Book Fair an absolute success. And the KAS Regional Program Gulf-States can look upon very positive results. „The Book Fair was an excellent platform for us to introduce our goals and activities to a larger audience“, said Thomas Birringer, Regional Representative to the Gulf-States. “The interest in our programs and publications was remarkable“.

Dr. Johannes Beermann,State Minister of the German Freestate of Saxony, visited the Higher Colleges of Technology in Abu Dhabi. The intention of his visit was to foster recently established economic ties between Saxony and Abu Dhabi and to extend this cooperation to the fields of research and education.

This year’s Journalists Academy started on December 3rd in cooperation with the KAS-Regional Program Gulf-States, located in Abu Dhabi, and the Journalists Association of the United Arab Emirates (UAE). (Dec. 4, 2009)

November 9th, in Kuwait: Conference on the occasion of the 20th anniversary of the fall of the Berlin Wall

Cooperation of KAS, embassies and the Ministry of Foreign Affairs

Even in retrospective it still seems a miracle that the separation of Germany was overcome so peacefully. This was the consensus among historians, analysts, diplomats and politicians who gathered on November 9th, the 20th anniversary of the fall of the Berlin Wall, in Kuwait for discussions. The conference – the only one held in the region to mark this occasion– was organized by KAS in cooperation with the embassies of Austria, Hungary, Poland and Germany as well as the University of Kuwait and the Kuwait Diplomatic Institute (KDI). 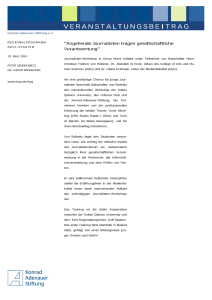