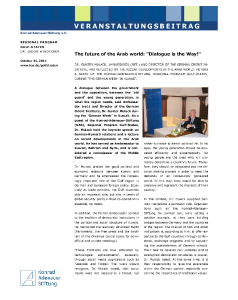 The future of the Arab world: "Dialogue is the Way!"

DR. GUNTER MULACK, AMBASSADOR (RET.) AND DIRECTOR OF THE GERMAN ORIENT INSTITUTE, CALLS FOR REFORMS IN THE REGION

A dialogue between the government and the opposition, between the "old guard" and the young generation, is what the region needs, said Ambassador (ret.) and Director of the German Orient Institute, Dr. Gunter Mulack during the "German Week" in Kuwait. As a guest of the Konrad-Adenauer-Stiftung (KAS), Regional Program Gulf-States, Dr. Mulack held the keynote speech on German-Kuwaiti relations and a lecture on recent developments in the Arab world.

Late September almost 130.000 Emiratis were called to the ballot box to cast their vote for the 20 candidates to be elected to the Federal National Council (FNC). This was only the second time that elections were held in the UAE. How significant they were for the country was topic of discussion at a conference jointly organized by KAS Regional Program Gulf-States and Zayed University on October 20th 2011. Newly elected FNC candidates, well-known Emirati commentators, and campaign communication experts analyzed the media coverage as well as the election process in two separate panels.

Following the great success of the previous German-Arab Journalists’-academy KAS decided to invite once more young journalists from Germany and the Arab world. The 6th academy of the series takes a slightly different approach: for the first time the participants in the UAE will work with multimedia. The 20 participants will jointly create a German-Arab webpage on the new developments in the UAE. 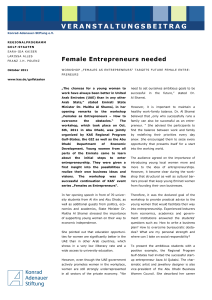 „The chances for a young woman to work have always been better in United Arab Emirates (UAE) than in any other Arab State,” stated Emirati State Minister Dr. Maitha Al Shamsi, in her opening remarks to the workshop „Females as Entrepreneurs – How to overcome the obstacles.“ 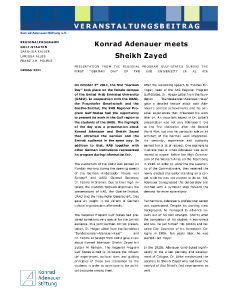 On October 3rd 2011, the first “German Day” took place on the female campus of the United Arab Emirates University (UAEU). In cooperation with the DAAD, the Fraunhofer Gesellschaft and the Goethe-Institut, the KAS Regional Program Gulf-States had the opportunity to present its work in the Gulf region to the students of the UAEU. The highlight of the day was a presentation about Konrad Adenauer and Sheikh Zayed that attracted the German and the Emirati audience in the same way. 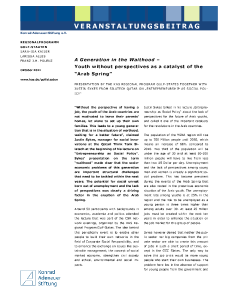 A Generation in the Waithood –

Youth without perspectives as a catalyst of the “Arab Spring”

“Without the perspective of having a job, the youth of the Arab countries are not motivated to leave their parents’ homes, let alone to set up their own families. This leads to a young generation that is in the situation of waithood, waiting for a better future”, claimed Justin Sykes, manager for social innovations at the Qatari Think Tank Silatech at the beginning of his lecture on “Entrepreneurship as Social Policy”. 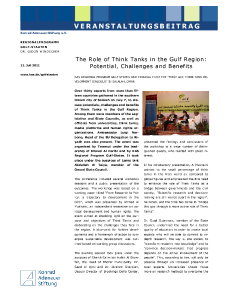 The Role of Think Tanks in the Gulf Region: Potential, Challenges and Benefits

Over thirty experts from more than fifteen countries gathered in the southern Omani city of Salalah on July 7, to discuss potentials, challenges and benefits of Think Tanks in the Gulf Region. Among them were members of the Legislative and State Councils, as well as officials from universities, think tanks, media platforms and human rights organizations. Ambassador Luigi Narbone, Head of the EU Delegation to Riyadh was also present. The event was organized by Tawasul under the leadership of Khaled Al Haribi and by KAS Regional Program Gulf-States.

A life audience of more than 120 guests followed on July 31st the intense discussions on the issue „After the Arab Awakening: Opportunities und Challenges for a New Arab World“ with Dr. Dalia Mogahed, Dr. Tarek Yousef, Abdel Bari Atwan as well as Dr. Shadi Hamid. Listeners and participants in the high-profile panel alike twittered the debate proceedings life(#DD2) and reached out to more than 15.000 Twitter-followers. If you missed the opportunity to attend the debate, you have now here the chance to watch the live records online. 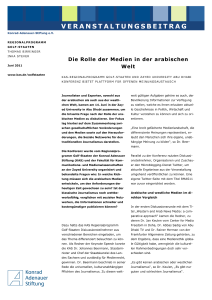 Arab and Western journalists, academics and experts gathered at Zayed University in Abu Dhabi today addressing the Role of the media in Arab societies.The conference, organized by Konrad-Adenauer-Stiftung and the College of Communication and Media Sciences of Zayed University aimed at exploring the reciprocal relationship between societal changes and the media. 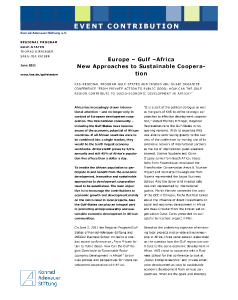 KAS-REGIONAL PROGRAM GULF-STATES AND INSEAD ABU DHABI ORGANIZE CONFERENCE “FROM PRIVATE ACTION TO PUBLIC GOOD: HOW CAN THE GULF REGION CONTRIBUTE TO SOCIO-ECONOMIC DEVELOPMENT IN AFRICA?”