Shortly before Christmas, Konrad-Adenauer-Stiftung invited academics, experts and decision-makers from the three regions to discuss the current priority issues of the Middle East during a multiday symposium, held at the Dead Sea, Jordan.
December 18, 2013 Ordering Information 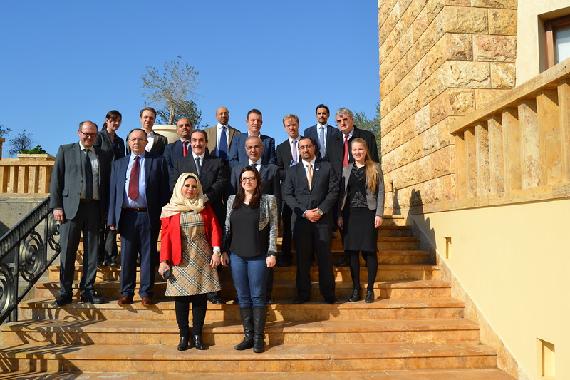 RPG KAS
Chances for Triangular Cooperation - Experts from Europe, the Levant and the Gulf States at the Dead Sea, Jordan.

The conference participants first addressed the upheavals in the Middle East, with a focus on the ongoing civil war in Syria and the fall of the Muslim Brotherhood in Egypt. There was concern that sectarian tensions in the region will increase. Through pointing out different perspectives from Europe, the Levant and the Gulf States on how to deal with the changes in the Middle East, this conference could contribute to a better interregional understanding of how European and Arab countries perceive the transformation in the Middle East.

In particular, during the session about Syria, topics such as the different actors and alliances within the country, and the economic and humanitarian impact of the Syrian crisis on its neighbours – especially Jordan – were discussed, as well as the reorientation of regional players like Qatar, Saudi Arabia and Turkey in terms of their foreign policy. In a next step, the experts raised the question what the future role of the Muslim Brotherhood could look like and why the West, given the fall of the Islamist organisation, finds itself trapped in a dilemma.

Since Iran and the permanent members of the United Nations Security Council plus Germany (P5+1) reached their nuclear agreement just a couple of weeks before the joint conference organised by KAS Regional Programme Gulf States and Amman Office, the participants were keen to discuss the possibility of a continuing rapprochement between Iran and the West: how will it further impact the rethinking of strategies by all key actors involved? Presentations from Bahrain and Lebanon illustrated the impact a resumed dialogue between Iran and the West could have on the Cedar state and the Gulf countries.

The last session was devoted to the opportunities for triangular cooperation between Europe, the Levant and the Gulf region as a consequence of the transformation process in the Arab world. Finding joint approaches for conflict resolution was at the heart of the engaged discussions. The conference participants meanwhile agreed on the necessity for the three regions to conceive complementary policies which should not undercut or counteract each other.

The experts came to the conclusion that Europe should not see the Levant and the Gulf States as separate entities when reconsidering its strategic interests in the Middle East. These two regions are strongly interconnected and should be treated as such. It was with this aim in view that the two KAS foreign offices took the opportunity of bringing together experts from Europe, the Levant and the Gulf. 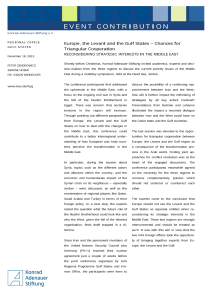 Europe, the Levant and the Gulf States – Chances for Triangular Cooperation (Pdf)
Download

Between Europe and the Gulf