On June 28 2016 the Konrad Adenauer Foundation and the Lebanese Organization of Studies and Training (LOST) participated in the closing event for the Project “Promoting Women’s Role in the Political Participation” concluding it with a joint Iftar.
June 28, 2016

The Lebanese NGO, in cooperation with the KAS, had organized a series of several-months long workshops in order to encourage women’s participation in the political life in the Baalbek-Hermel region. Over 80 women had participated since mid of 2015 in the workshops and four of them consequently became candidates in this year’s municipal elections.

In their opening remarks, Peter Rimmele, Resident Representative Lebanon and Head of the Rule of Law Program Middle East/North Africa, Hana Nasser, Administrative Director of the KAS’ Beirut office and Dr. Ramy Lakkis all stressed the importance of female participation for democracy and praised the braveness and enthusiasm of the female activists.

Subsequently, several of the activists and candidates talked about their positive experiences during the election campaign but also mentioned the hurdles that still need to be overcome, such as an overarching patriarchal culture as well as the general political difficulties faced by the country. All participants concurred that the project has been a great success but only constitutes a first step towards complete gender equality in Lebanon’s political life. 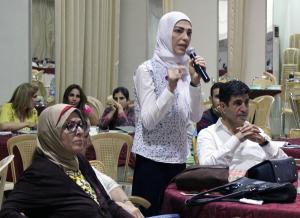 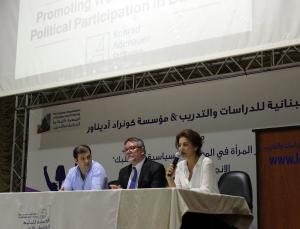