Workshop Series on the protection of women in armed conflict

On July 16 the Konrad Adenauer Foundation in cooperation with the Central Research House (CRH) conducted the last in a series of three workshops on the topic of “Women in Armed Conflicts: Positive Role and Protection Mechanisms.”
July 16, 2016

The workshops attracted a wide audience consisting of a total of 36 journalists, civil society activists, representatives of the ministry of social affairs and representatives of the political parties. Presentations were delivered by the director of the CRH Melkar el-Khoury, the psychoanalyst and expert on the treatment of torture victims Dr. Reina Sarkis, and Rita Merhej, author and lecturer in psychology and education at Haigazian and Lebanese American University.

In the first workshop the participants discussed the psychological effects of both the negative as well as the positive participation of women in armed conflict. Afterwards, the connection between women, peace and security was scrutinized through the lens of the relevant United Nations Security Council resolutions. In the last of the three workshops, participants engaged in a discussion about the existing protection mechanisms within the framework of International Humanitarian Law.

Having faced a 15-year-long civil war (1975-1990) itself and currently being affected by the crisis in neighboring Syria, the protection of women in areas of conflict is topic of particular importance to Lebanon. All the participants stressed the need to overcome the dominant focus on women as mere victims of armed conflict and instead work towards creating possibilities for women to play a positive and constructive role in areas of conflict. 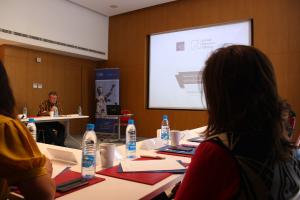