Conference on Preparing for Elections in a Transitional Society: Kenya's Preparedness for Elections
August 21, 2012 Ordering Information

The 2012 Annual Jurists Conference on the theme "Preparing for Elections in a Transitional Society: Kenya's Preparedness for Elections" was hosted by ICJ Kenya in collaboration with Konrad Adenauer Stiftung between 14th and 18th August 2012 at Mombasa ContinentalResort in Mombasa, Kenya.

The main focus of the conference was to take stock of the ongoing institutional and legislative reforms in Kenya, and to question whether they are adequate to chart Kenya’s democratic and good governance goals and realize the implementation of the Constitution particularly in the wake of the infamous 2007 disputed elections.

A documentary was shown to the participants as a way of reflecting on what went wrong in 2007 which exhibited issues of hate speech in the build up to the elections; the significant amount of pre-election violence especially at the political parties’ nomination stage; the challenges of accurate tallying and releasing of elections results especially at the national tallying centre.

The conference then endeavoured to take stock of what had been done to deal with the 2007 wrongs by inter alia reviewing the reports and recommendations of the Kriegler Commission (on electoral reforms in Kenya) and Waki Commission (on post-election violence); assessing current initiatives at the domestic level to hold accountable those behind the 2007 post-election violence; as well as addressing the issue of sexual gender-based violence during elections.

Having reflected on what went wrong and the various initiatives that were put in place to address those wrongs, the participants engaged key players in the electoral process to find out their preparedness for the forthcoming elections slated for March next year (2013). The main players in the process who addressed the conference on their preparedness included the police service, the Independent Electoral Commission (IEBC) and the National Cohesion and Integration Commission (NCIC).

Former Secretary of State of the Federal Republic of Germany- Klaus-Juergen Hedrich, delivered a keynote address in which he shared the German experience in handling elections in particular and the building of a democratic society from the German perspective in general.

Further, the conference took a moment to reflect on the emerging issues and arrangements in Kenya’s electoral arrangement. Here participants deliberated on the question of the impact of the ICC cases on the next elections; the various electoral laws that have been enacted post the promulgation of the new Constitution in 2010; the gender considerations particularly in view of the one-third (1/3) rule, as well as the prospects of having a presidential run-off.

During the deliberations a number of issues were raised which would require immediate attention of all key players in the electoral process if the country is to have peaceful, free and fair elections. Among the key challenges highlighted at the conference include;-

Questionable independence of the IEBC in the wake of the Biometric Voter Register saga in which the executive seem to be orchestrating events.

Slackened voter education, the complexity of the upcoming elections notwithstanding.

Too many laws and regulations being enacted closer to the elections thereby denying the IEBC, government agencies and the public in general time to understand and internalize the content and their implications.

Notable presenters at the conference included;

oFormer Secretary of State of the Federal Republic of Germany- Klaus-Juergen Hedrich, who delivered a keynote address on day one of the conference by sharing the German experience,

oProf. Githu Mugai, the Attorney General of the Republic of Kenya who officially opened the conference

oHon. Kenneth Marende, the Speaker of the National Assembly of the Republic of Kenya who officially closed the conference

oMs Shumbana Karume, the Head of Democracy and Elections Unit, AU’s Political Affairs Department who presented on ‘The role of the AU in ensuring democratic transition in Africa’

oCommissioner Halakhe D. Waqo, NCIC - Ensuring Peace and Cohesion before, during and after elections:The Role of NCIC

oMr. Tom Kagwe, Member of Independent Policing Oversight Authority (IPOA) - Policing In Kenya Reforms Before, During and After the Upcoming Elections

oDr. Karuti Kanyinga, Institute for Development Studies, University of Nairobi - Votes and violence in Kenya A Reflection on the post-2007 Election Crisis

oMs Kethi Kilonzo, Advocate - Reflections On The Trial And Management Of Election Petitions In Kenya 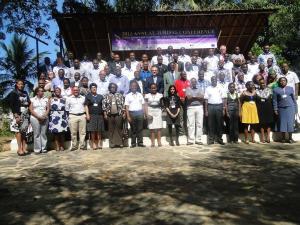