Stakeholders' Conference on Activism against Corruption

The stakeholder’s conference on Activism against Corruption in Africa was held in Johannesburg, South Africa. This was a follow-up conference to Combating Corruption that was held in Cape Town 2015. The conference was organised in conjunction with “IFAISA” (Institute for Accountability in South Africa) and brought together various actors drawn from the legal, political, private sector, civil society, faith-based organizations, the media, academia, trade unions and State agencies to deliberate on the active role that each sector and individual can play towards fighting corruption in Africa.
November 25, 2016 Ordering Information 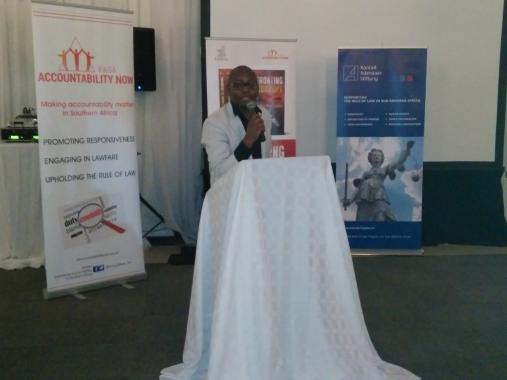 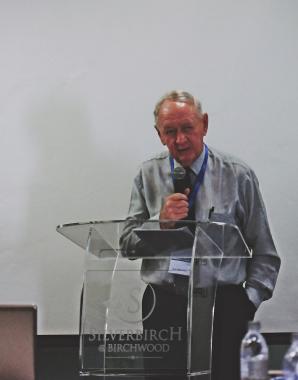 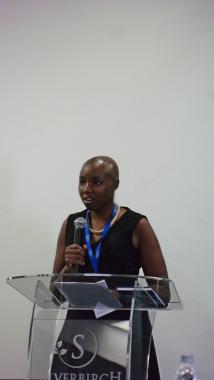 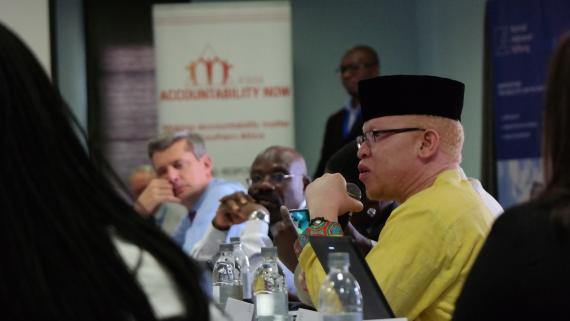 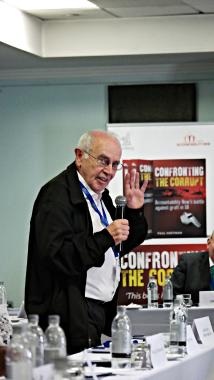 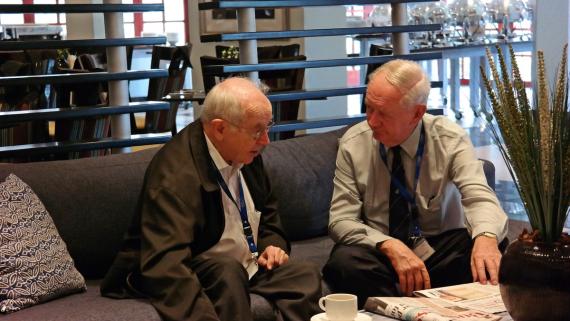 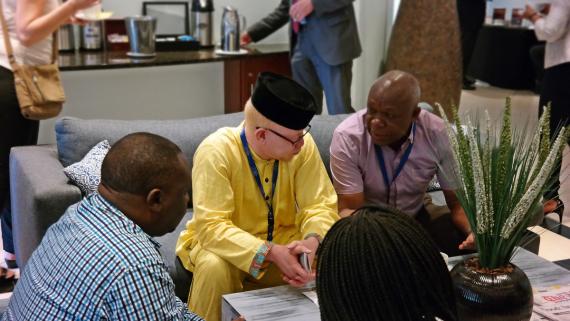 For two days the conference examined in detail, causes, consequences as well as measures against corruption. The Conference started with a welcoming dinner where Justice (Rtd) Johann Kriegler gave a special address concerning his insights in the fight against corruption.

The tone of the conference was set by retired Justice of the South African Constitutional Court Johann Kriegler at a welcoming dinner held on 22nd November 2016 wherein he addressed various aspects including the symptoms, consequences and what needs to be done to effectively fight corruption on the continent using the South African example. He lamented the widespread corruption in South Africa terming it as ‘a cancer that was spreading not only nationally but also regionally and continentally and indeed globally’. He pointed out that eventually the state and social stability was tremendously threatened since corruption affected state services, tax institutions, stability of all state institutions, efficiency, integrity and social cohesion. In stressing that social messes would not simply go away by ignoring the same but instead worsened, he called for investigation and an independent national prosecution head. The salvation for ending corruption at all levels laid in just doing a very good job by everybody since best laws and the best constitution on their own would not be sufficient if the masses do not embrace and stand up against corruption in all its forms and manifestations. A new spirit which he already identified in society causing a vibrant dispute targeting the widespread disgust of corruption was the precondition for organized, directed and coordinated participation. The active and committed civil society was the ultimate remedy in cases where laws fail or prove to be insufficient.

In the course of the following two days, the panel sessions examined the root causes of corruption and the direct impact to society with a view to identifying practical and sustainable steps towards slaying this monster.

The consequences of corruption for the society

Although corruption is definitely not a mere African problem, its occurrence is more visible, clearer and more harmful on the continent than in other parts of the world. Working out the reasons for actively fighting corruption, it was acknowledged that corruption is against human rights and could no longer be viewed as a victimless crime since it drives inequality, represents devastating deprivation of human rights and liberties and contributes to instability. While acknowledging that corruption was rampant in public institutions, the participants noted the activities of multi-national companies and other private sector players that were fuelling this scourge on the continent. It was clear from the deliberations that corruption was rooted in greed and the high regard for material goods and value of money in favour of an increasingly moral decay.

Reasons and structure of the crime of corruption

Mr Martin Kreutner, Dean and Executive Secretary of the International Anti-Corruption Academy (IACA) based in Vienna, Austria, strongly opposed the concept of corruption being a “victimless crime” which was raised during discussions. Instead, he explained the structure of the crime involving three actors, namely a principal, an agent and a client, each of them actively participating in the game. Comparing the system of ethical particularism which was the genesis of corruptive practices and, on the other hand, ethical universalism, he pointed out how the systems came into conflict dependent on the social context in which they were applied. Therefore, stability of a society and preserving social cohesion would require the unlimited compliance with ethical universalism prohibiting corruption under all circumstances. On a macro-social level, trust in the social contract and all state institutions, the rule of law and good governance as well as equality and fairness presupposes strict condemnation of corruption.

Concerning possible solutions leading out of the depressing state of corruption, a systematic approach was suggested including a prescription of a criterion for effective anti-corruption agencies which must be specialised, adequately resourced and trained, independent and accountable among others. Furthermore, coordinated and trustworthy execution of mandates bestowed upon has the investigation, prosecution and judicial entities must be cultivated and fostered.

Moreover, criminal and civil sanctions are a must if the war against corruption is to be won. In this regard, there was a proposal to establish an International Anti-Corruption Court to complement national mechanisms which were found to be generally weak due to the lack of political will by the main perpetrators and beneficiaries of this vice as well as the complicity of holding to account those patronizing tax havens and those involved in trans-border money laundering schemes worldwide. Notwithstanding the theoretical persuasiveness of such a court, doubts were cast about such court’s acceptance and enforcement of its rulings noting the difficulties already associated with the International Court on Criminal Justice in The Hague.

The role of the media in the fight against corruption

On the subject of the media, multiple ways of its involvement in, and, on the other hand, engagement against corruption was discussed. Indeed, the media were able to uncover stories, open source information and connect with whistle-blowers. Nevertheless, journalists had to be trained to employ these tools. Further, the integrity of journalists and the media was critical in order to create and prove credibility. It was agreed that credibility was the most convincing weapon the media could bring up against maladministration and all issues related to corruption. For that to be effective, stories have to be told in a way that make the ordinary citizens relate to the huge sums of money in question by pointing to the rights and or services they are deprived of as a result of corruption.

The most optimistic way forward for revealing transnational corporate maleficence was made out in creating networks establishing international cooperation and a hub of experts as these methods had made the investigation of the Panama papers so successful. It was concluded that the media provides a platform for civil society and the public to question and hold public officers accountable and must therefore endeavour to serve the interests of the society and not of those in power if their actions are contravening the common good.

The optimistic outcome based on practicable insights

In conclusion, the conference stressed that with a very vigilant public, a proper implementation of well-thought and strong control mechanisms as well as sanctions stimulating incentives to act for the common good eventually leading to a common sense of condemning corruption, progress in eliminating the monster was definitely within reach failure to which the consequences are dire.

At the end of the conference, the participants finalized a resolution which can be downloaded as PDF-Document at the top of this website. 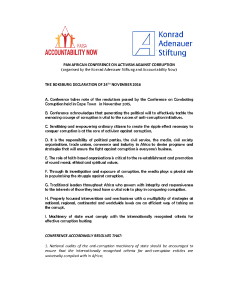 Stakeholders' Conference on Activism against Corruption in Africa 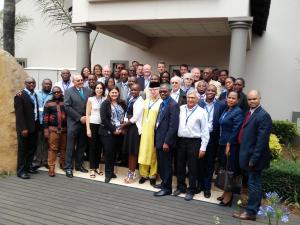 Participants of the Conference in Durban 2016 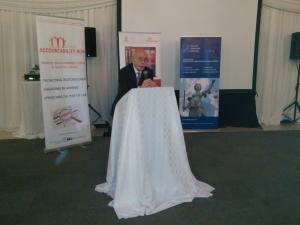 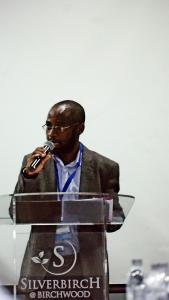 Prof. Jamil Mujuzi, University of the Western Cape on "The role of Civil Society in championing the fight against corruption" 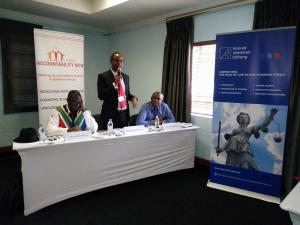 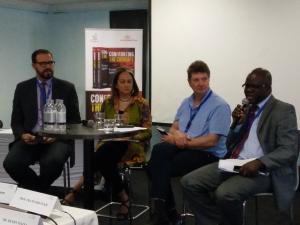