„Today, Europe’s 500 million citizens have the foundation on which to build a better Europe in the future,” said Herman Van Rompuy, President of the European Council in the first „State of Europe“ address. Van Rompuy used this address to promote a confident and strong Europe in front of an audience of 800 citizens at the historic Pergamon Museum in Berlin.
November 9, 2010 Ordering Information

With this new format of an annual „State of Europe“ address, the Konrad-Adenauer-Stiftung provides the highest ranking representative of the European Union the opportunity and platform to annually reflect on developments in Europe and show the way to a better future. What is the essential character of the Union and what is the state of its underlying ideal of European unity – in particular in light of the fiscal crises of 2010 that lead political observers to call into question the latter assumption. Nonetheless, the crises may have been helpful as far as showing the majority of the population that we are all in the same boat together.

In the words of Van Rompuy: “What is being decided in Athens, affects Amsterdam. If Barcelona prospers, so does Berlin.“ Due to this interdependence between European states, he called for a new sense of responsibility toward each other. In conjunction with the decision by the European Council in support of a crisis prevention mechanism - which Van Rompuy called the biggest economic and financial reform since the introduction of the Euro - and the austerity measures already enacted by European governments, the market would regain its trust in the European currency. Van Rompuy also explicitly commended European governments for their action in the face of widespread voter outrage and public strikes.

He also openly chided euro-skeptics: „The belief to be able to survive on your own in a globalized world is not just a delusion, but a lie.” Instead, Europe would have to be open for new member states, such as the countries of the Western Balkan. With their accession, civil wars in Europe would come to an end, said the Belgian Van Rompuy. Similarly, future challenges could only be met together. Europe would have to start now to secure its position in the world economy, the G20 and IMF.

Much like Van Rompuy, who called November 9th the „pivot of modern European history“, the Chairman of the Konrad-Adenauer-Foundation, Dr. Hans-Gert Pöttering, emphasized the significance of this date for the first “State of Europe” address during his introductory comments as well. This date essentially signified nothing less but the victory of freedom – allowing for the liberation Germany’s and with that the unity of Europe.

Chancellor Dr. Angela Merkel herself called the address in her introductory comments a crowning moment in European history. However, it was also crucial to reflect upon and recall that the greatest European goals - reconciliation, peace and liberty - to this day were not to be taken for granted. Europe was bound by a common destiny. Only together could we maintain „our way of living and Economic system,“ said the Chancellor. From this resulted the necessity for concerted action, which had proven itself during the European currency crisis earlier this year.

One year from now, on November 9th, 2011, the President of the European Commission, José Manuel Barroso, will deliver the second “State of Europe” address. 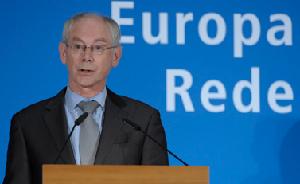