Dr. Johann Wadephul MdB on the foreign policy consequences of the corona pandemic for Europe

The corona pandemic acts both as a catalyst and incubator of geopolitical change. Dr. Johann Wadephul MdB outlines the first trends and the foreign policy consequences for Europe.
July 28, 2020 Ordering Information

It was under the motto “Together for Europe’s recovery”, that Germany took over the Presidency of the Council of the European Union on 1 July 2020 for a period of six months. The focus of the German EU Council Presidency’s programme is on mitigating the corona pandemic in the immediate term. Howev-er, it also applies to strengthening Europe’s ability to act beyond its own borders, since geopolitics is playing an increasingly important role. Only in this way can Europe defend its interests and assume its responsibility in the world.

At the Konrad-Adenauer-Stiftung we advocate for a strong, united Europe that is capable of action, for the transatlantic partnership as well as for a partnership and rule-based international order. The theme of security represents a focal area of activities pursued throughout the foundation. As we are all too aware that we simply cannot take our security for granted. Hence, foreign and security policy consider-ations and a clear commitment to European and Euro-Atlantic integration govern our actions at the foundation’s more than 30 locations throughout Europe and North America. Dialogue with political leaders represents an important element when managing and coordinating these issues.

Every year, a conference comprising the heads of country offices also brings together high-ranking government, parliament and party representatives with a goal of determining the location and strategic focus of the foundation’s European and international work over the coming twelve months. Owing to the corona pandemic, the conference could not take place as a face-to-face event in Berlin as usual, and was instead transferred to the digital space: from Moscow to Stockholm, Geneva and Madrid right through to Washington, staff abroad were connected with one another as part of a video conference.

At the start of July, more than 35 colleagues spanning five time zones held discussions on current politi-cal developments and challenges underpinning the foundation’s international work. The spectrum of themes ranged from major foreign and security policy issues – the future of transatlantic relations, the relationship with China and Russia, multilateralism under crisis – through to specific European policy decisions – EU Council Presidency and recovery package.

In this context, the Deputy Chairman of the CDU/CSU parliamentary group in the German Bundestag, Dr Johann-David Wadephul MdB, presented his theories on “Systemic Competition – Geopolitics in Times of Corona”.

Dr Wadephul emphasised that the pandemic acts as a catalyst for developments which, for a long time were lying dormant or were openly played out and as an incubator for completely new developments, and outlined systemic challenges and instabilities as well as strategic challenges in order to then con-duct a sober analysis of the EU’s role and capabilities: “From a global perspective, the EU is – still – an economic power. As regards foreign policy, it is a regional power at best, while merely a dwarf in securi-ty policy matters”. In light of the above, Dr Wadephul MdB called for the EU to focus on fulfilling its core priority tasks. Below you can find out how these core tasks are defined and what the most important foreign policy tasks are. 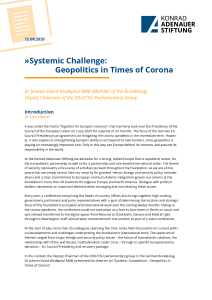