The third debate on the importance of citizen participation in democratic processes and the role of parliament as the highest representative body was held on Tuesday, October 20, 2020 at 5.30 pm, via the ZOOM platform. Elvira Kovač, MP of the Association of Vojvodina Hungarians, and Stefan Surlić, assistant at the Faculty of Political Sciences, shared their knowledge and experience with the participants. The debate was moderated by Dejan Bursać, a research associate at the Institute for Political Studies.

Elvira Kovač, a member of the National Assembly of the Republic of Serbia since 2007, pointed out in her introductory speech that the National Assembly of the Republic of Serbia "sat down only a few days during the pandemic in order to subsequently approve the state of emergency." Without regular sessions, plenums and the functioning of working bodies, the representative, control and legislative role of the parliament is reduced to a minimum. Kovač added that "an additional challenge was the expiration of the mandate of MPs due to the calling of parliamentary elections, so the focus of MPs shifted from the primary function to campaigns and elections. This was followed by a period when the functioning of the parliament in full capacity was also not enabled, although the pandemic subsided. "After the lifting of the state of emergency, one session was held in order to varify the parliamentary mandates."

The role of parliament in the EU integration process

As a member of the Committee on European Integration, Elvira Kovac emphasized the important role of the parliament in this process. "The Committee for European Integration is also working on the harmonization of laws with the acquis communautaire. Before any draft law relating to EU integration is on the agenda, the Committee's opinion must be considered. Parliamentary diplomacy, meetings with members of the European Parliament, members of EU member states and various regional and international gatherings are also of great importance for the work of the Committee. Since Serbia is a candidate country for EU membership, one of the most important tasks of the EU Integration Committee is to approve negotiating positions. When the Government of the Republic of Serbia prepares the document and submits it to the parliament, the representatives of the National Convention on the European Union are also invited and their proposals to the Committee may formulate as a proposal to change the negotiating position." After the opinion of the Committee for EU Integration and the parent committee (depending on the topic), the proposed negotiating position is verified by the Government of the Republic of Serbia, after which it is sent to Brussels." However, Elvira Kovač pointed out that "this has not been done for a long time, which is further complicated by the fact that Serbia still does not have a head of the negotiating team."

Citizen participation in democratic processes and their representation in parliament

In his introductory speech, Stefan Surlić, from the Faculty of Political Sciences, pointed out that we must determine our values ​​when it comes to the National Assembly of the Republic of Serbia in order to reach the institutional procedures that are problematic today. "Democracy is viewed exclusively institutionally, and institutions are experiencing a serious crisis of citizens' trust, and the citizens are looking for alternatives," Surlić pointed out.

"I would criticize the citizens who do not want to participate, they tend to run away from the political. There is more and more talk about finding an alternative outside state institution, outside the parliament, outside the party - to build political life on an "anti-political basis". That search for an alternative, as opposed to the existing policy through the participation of citizens, which in itself would be something different and something outside the existing institutions, I think has ruined democracy. That is why now there is no one who would defend democracy and the existing democratic institutions, including the parliament."

Pluralism is often presented in society as a threat, which is in fact the basic value of democracy, together with participation and competition. In theory, these are components of a polyarchic democracy, and that has been completely set aside today. "Citizen participation is crucial and it is not just about monitoring the elections and the work of the parliament. The problem is that we have been humiliating the existing institutions for decades by our (non) actions. That anti-politics was manifested through various negative perceptions of the National Assembly," Surlić added. Such a negative perception has led to the National Assembly losing the trust of citizens, who believe that its oversight, legislative and control role is questionable, even though parliament as an institution is key to developing and preserving democracy in all democratic states.

When it comes to citizen participation, it was pointed out that in Serbia only 5-7% of citizens are active through political parties, groups of citizens, etc., and all others are divided into actors and sleepers. Actors go to the polls, follow the news, but there they limit their engagement in the field of politics and depending on the country, in the democratic ones it is 50-60% of the citizens. However, the number of sleepers is also huge, constantly growing and reaching up to 40-50% of citizens. They are not interested in politics, they do not want to deal with any social issues, they don’t participate in debates… In that way, they express a clear position “not that they do not want freedom, but that they are convinced that their participation or voting would not bring any change. That indifference is a constant and that worries", concluded Surlić.

In order to restore the reputation of the parliament and strengthen its role, the committees in the National Assembly of the Republic of Serbia should be strengthened first. It is necessary for the highest officials of the Government to speak in the highest representative body when discussing a legal proposal. Experts should be invited, we should have a transparent work of the committees and it should be seen how much knowledge, analysis and energy is invested by the deputies and the parliamentary administration in the formulation of legal proposals. We need to strengthen the technical capacity of MPs in order to really have a developed parliament. Members of the National Assembly must have the capacity of one member of the European Parliament who can employ three assistants, and then we will have effective parliamentary committees, effective and independent deputies who will be fully committed to their function of citizens' representatives. As an example of good practice, the institution of public hearings in the preparation of laws was pointed out, as well as hearings related to problems in their implementation, which allows to invite representatives of various institutions, the Government and the non-governmental sector.

One of the issues that was opened by the debate is the issue of metropolization of the parliamentary function, which is especially important considering that in the new convocation of the National Assembly, 82 local governments will be without "their representative". The question is, therefore, how to stimulate MPs who are not from Belgrade, Niš or Novi Sad to take care of the general interest, but also to present local problems in an appropriate way and to fight for them in the national parliament.

"I see politics as a way to improve our everyday life, and that is why it is important for citizens to participate in that process, because if they do not want to - who will?", said MP Elvira Kovač. Only through the joint work of MPs and citizens can we expect the National Assembly of the Republic of Serbia to work in the best interest of the citizens and enjoy their trust.

For more information on upcoming debates, follow our site. 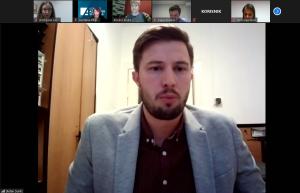