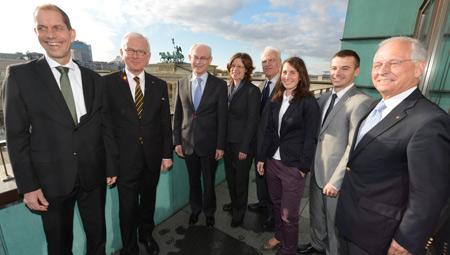 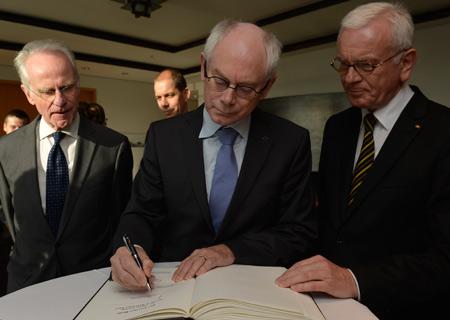 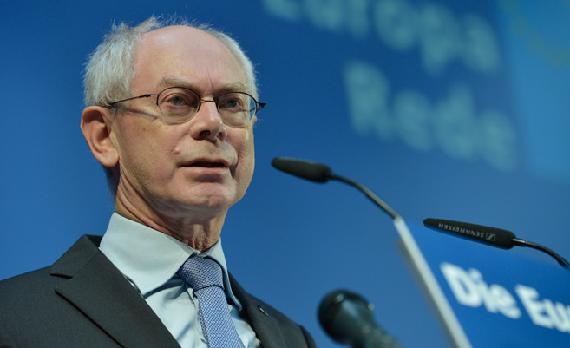 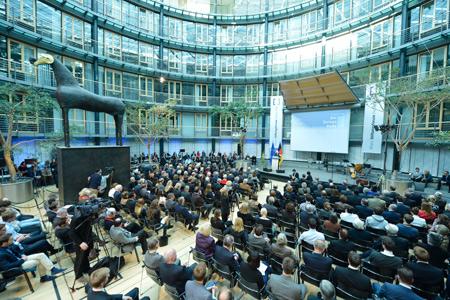 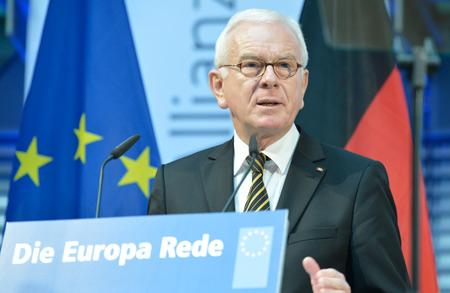 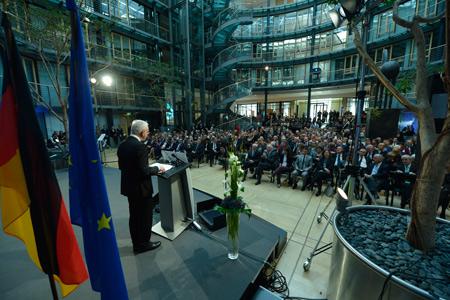 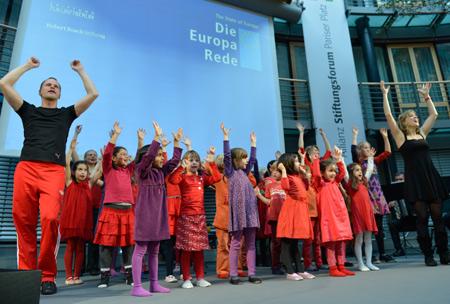 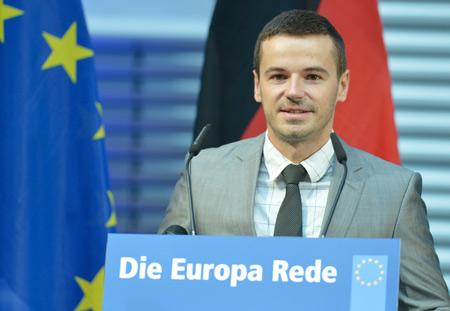 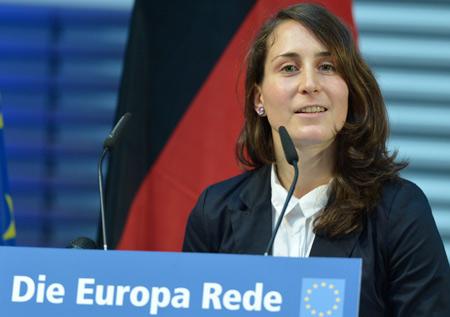 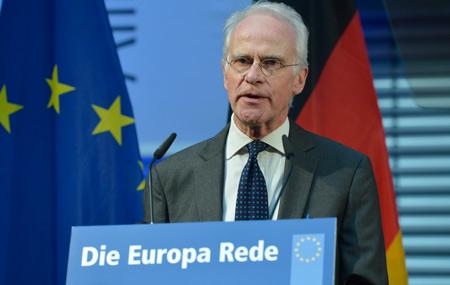 “From here, we can almost see the Brandenburger Tor, where twenty-four years ago, the thirst

for freedom burst out into the open”, Van Rompuy started his speech. This event in Europe’s

recent history, closed the ‘Post-War’ period, and opened a new, what he called ‘Post-Wall’ period,

where Europe is still in the midst of it today. In the last two decades Germans developed a sense of

common belonging, whereas Europeans are still getting to terms with this new situation. “We have

not yet reached the moment to say: “The new Europe” has become just that, “Europe for all”.

To get to this Post-Wall Europe, in times of “globalization and financial crisis”, Van Rompuy

expressed the need for reforms in all member states. The economic crisis has forced the European

Union into a new role and many Europeans have the impression that Europe makes them weaker,

“whereas the founding promise was that Europe would make people and countries stronger.”

Therefore the EU leader asked for a little more help from all Europe’s national leaders. “They must

tell the truth, and one such truth is that there are no quick-fixes and that reforms on growth and jobs

take time. Those who pretend that their country can succeed on its own sell illusions.” This could

lead to mistrust and prejudices against other EU citizens, he said.

“The still open geography of Europe doesn’t make it any easier for Europe to become a ‘Heimat’.

Each time our Union grows, we ask people to feel at home in a new club.” In recent years, because

of the economic situation and the globalization, this growing Europe has come under some

criticism and raised distrust between one another. Van Rompuy said he understood these concerns

but stressed the only solution was economic growth and job creation, not blaming immigrants

from other EU countries. "Catchwords like 'benefit tourism' and 'social dumping'" should not be

used against immigrants. One fundamental change, the fall of the Berlin Wall brought for many

Europeans was the freedom of movement. “For me, a space of freedom and rule of law – for restless

travelers and home-staying citizens alike – is more than an element of an economic Union: it is a

pillar of the new, post-Wall Europe: it is a sign of civilization.”

This safe haven attracts people to come to Europe. “Today people no longer flee FROM Europe as

in centuries past, but TO Europe.” Still, he said, legal migration should not be mistaken for illegal

migration, referring to the recent dramas that happened at the island of Lampedusa. These are

countries. This way, a "Post-Wall Europe" could be built and the EU could become a "homeland"

for its citizens, he said. By giving some numbers, Van Rompuy reminded Europe to its responsibility

concerning asylum policy, hoping these numbers can help nuance some of the discussions. “There

are just over 300.000 asylum applications to the EU every year. About a third was granted protection

last year, which makes it about merely 200 asylum seekers per million EU citizens. Looking at

war zones. And here it is really important to set things into perspective: in 2 years of war, our 28

Europe has gone a long way, but has still a long way ahead. “European countries are taking

much more joint action in the world as people think. People are looking at European countries,

including Germany, to see if they are ready to play their role, in terms of money and also in terms of

manpower.” And while being the richest continent in the world, solidarity should be given priority in

the facing challenges for the European Union. “The challenge today, as I said, is to set forth this work,

at a most difficult moment for the people of Europe: when the results to convince them are not yet

all there, and with globalization and the crisis already having left their traces. But I trust this work of

conviction, and of convincing, will succeed; and that Europe's citizens will rise to the occasion.”

The Chairman of the Konrad Adenauer Foundation, Dr. Hans-Gert Pöttering, took his chance in his

importance of advancing European integration. In May 2014 the European citizens will vote for a

new parliament, “a centerpiece of Europe’s democracy”, Pöttering said. As a former president and

longtime member of the European Parliament, Pöttering said that the previously chosen way to

overcome the economic crisis must be urgently taken forward. A wise deepening of integration is

highly desirable he said by quoting Robert Schuman: “Truly thinking European, means to be aware of

all the realities, possibilities and duties that concern us all.“

The State of Europe