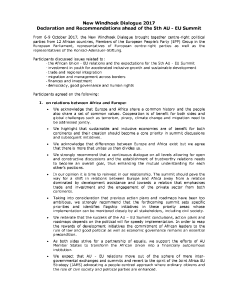 Declaration and Recommendations ahead of the 5th AU-EU Summit 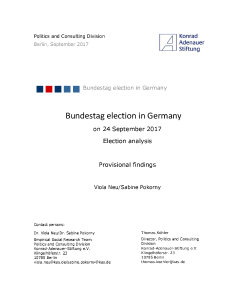 Bundestag election in Germany in 2017

The results of the 2017 Bundestag election are ambivalent. Both major parties lost support. Of the small parties, FDP and AfD were able to mobilize support, while The Greens and The Left barely experienced notable changes. The CDU/CSUunion performed best, thus constituting the largest faction with the mandate to form a government – which was nothing to be taken for granted after 12 years in power. Two options are conceivable politically: a Grand Coalition and a so- called “Jamaica coalition” consisting of the Union, FDP and The Greens, as currently governs in Schleswig-Holstein. 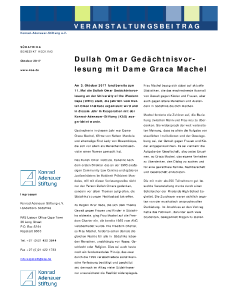 Graca Machel, a prominent guest speaker at the 11th Dullah Omar Memorial Lecture at the University of the Western Cape (UWC), addressed "violence against women and children in South Africa" in her speech. 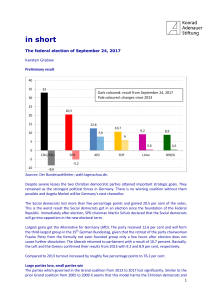 Despite severe losses the two Christian democratic parties attained important strategic goals. They remained as the strongest political forces in Germany. There is no winning coalition without them possible and Angela Merkel will be Germany’s next chancellor. Compared to 2013 turnout increased by roughly five percentage points to 76.2 per cent.

This event held at the Commission for the Promotion and Protection of the Rights of Cultural, Religious and Linguistic Communities (CRL Rights Commission), co-hosted by the Centre for Unity in Diversity and KAS provided for a lively debate on the question of how to balance Religion, Custom and the Constitution in modern South Africa.

Multilingualism is a cherished Constitutional principle that forms part of linguistic human rights. Hosted by the CRL Rights Commission and the Konrad-Adenauer-Foundation, this conference through informed discussion and debate encouraged a way to look forward to South Africa's future, particularly as to how multilingualism can be implemented to cater for the country’s wide and rich linguistic diversity. 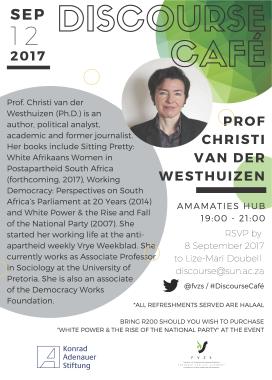 Unlimited Paths with your Humanity Degree

The annual SAIIA-KAS Careers Evening informed learners and students what career opportunities a degree in the Humanities can open up. Students had the opportunity to meet potential employers and receive information about internships and scholarships followed by a high-ranked panel of speakers that have pursued their careers within the Humanities.