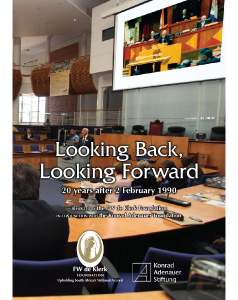 The publication is based on a conference, jointly hosted by the FW de Klerk Foundation and Konrad-Adenauer-Stiftung. The conference commemorated the historic speech by FW De Klerk on 2 February 1990 that opened the way to South Africa's transformation. Speakers from politics, business and academia shared their views on what has been achieved and what challenges still exist. 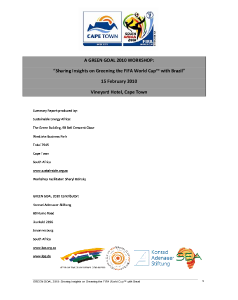 Sharing Insights on Greening the FIFA World Cup with Brazil

The Host City Cape Town has accumulated a vast pool of experience and expertise regarding the "Greening" of the FIFA World Cup. This report is based on a workshop, jointly organised by Sustainable Energy Africa and the Konrad Adenauer Foundation, that aimed to identify lessons that can be shared with Brazil, host of the 2014 FIFA World Cup. 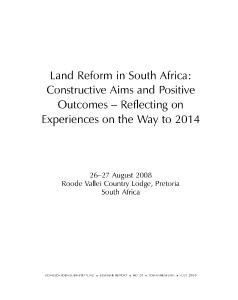 Reflecting on Experiences on the Way to 2014

In 2008 KAS partnered with the Southern African Development Community Centre for Land-related, Regional and Development Law and Policy to host a conference on Land Reform in South Africa. The conference aimed to provide an integrated and substantiven overview of the current realities facing the land reform programme in South Africa. The focus was on identifying the national land reform regulatory and policyframework, and practical case studies were highlighted to demonstrate issues, challenges and successes faced at the core of land reform. 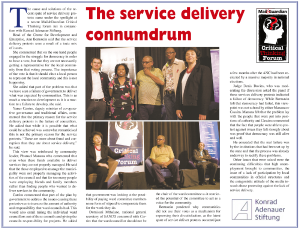 The cause of and solutions to the recent spate of service delivery protests came under the spotlight at a recent Mail & Guardian Critical Thinking Forum run in partnership with the Konrad Adenauer Foundation. Ann Bernstein, Head of the Centre for Development and Enterprise; Yunus Carrim, Deputy Minister of Cooperative Governance and Traditional Affairs and Dumisani Mthalane, National Secretary of SANCO were invited as panelists to discuss the issue. 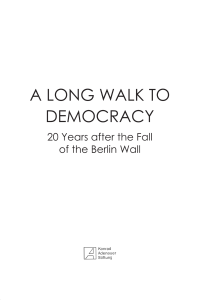 A Long Walk to Democracy

20 years after the Fall of the Berlin Wall

The opening of the Berlin Wall at 09th of November 1989 was the result, but also the cause of profoundchanges in Germany and Europe as well as in the international system. The publication is dedicated to the 20th Anniversary of the opening and the fall of the Berlin Wall. The authors analyze the consequences of this historic event for Germany, Europe and the international system. In a second part, authors from differentcountries and regions, describe and evaluate the perception and consequences of the fall of the Berlin Wall from an “outsider’s" perspective. 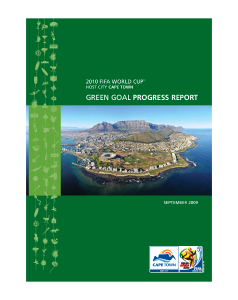 The Green Goal Progress Report is the product of a second round of KAS workshops for the City of Cape Town and the Western Cape Provincial Government. It monitors the timely implementation of the 41 Green Goal projects that were identified in the Green Goal Action Plan. The report shares success stories but also highlights hurdles that still need to be overcome in order to ensure an environmentally friendly World Cup. 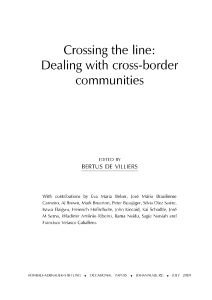 The publication aims to contribute to the South African debate where service delivery to cross-border communities has given rise to serious challenges in recent years. One of the challenges facing modern day federations is the provision of servivces to communities that are split by a provincial boundary. Residential patterns are not constrained by the demarcation of provinces and it is not uncommon for local communities to straddle provincial boundaries. 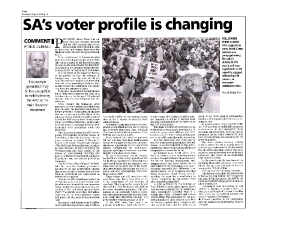 This publication, edited by Roger Southall and John Daniel, provides the reader with an in depth analysis of the fourth democratic elections in South Africa. Election Results; Trends in Party Support and Voter Behaviour as well as the Role of the Media are just a few of the focus areas that the fourteen chapters cover. The book, published by Jacana Media, is based on research papers commissioned by the Konrad-Adenauer-Stiftung.Click on the pdf-symbol above to read reviews of the book. 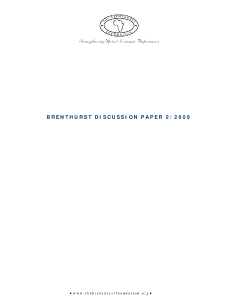 An agenda for a competiveness Africa

The Lake Kivu Consensus is the fruit of debate at two meetings in Italy and Rwanda in 2008, which identified competiveness as the critical element in an African strategy to increase employment and prosperity. The document proposes actions that African states can take, together with the private sector, NGO's and aid donors, to improve the continents economic competiveness. 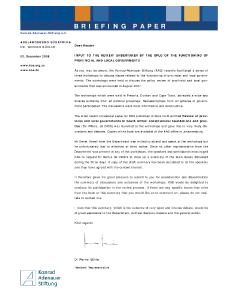 In November 2008, Konrad-Adenauer-Stiftung (KAS) facilitated a series of workshops to discuss issues related to the functioning of provincial and local governments. The workshops were held to discuss the policy review of provincial and local governments that was announced in August 2007. The most recent occassional paper by KAS entiteled "Review of provinces and local governments in South Africa. constitutional foundations and practice" (De Villiers, ed 2008) was launched at the workshops and formed the basis for the discussions. The workshops which were held in Pretoria, Durban and Cape Town, attracted a wide and diverse audience from all political groupings. Representatives from all spheres of government participated. The discussions were most informative and constructive. The attached document entails a summary of the workshops discussions and outcomes.