You are invited to join SAIIA, KAS South Africa and KAS Zimbabwe in a panel discussion with eminent Zimbabwean political analysts to dissect these and other emerging trends in the post-Mugabe era.
December 08 - 11, 2017

President Robert Mugabe’s resignation on 21 November was met with widespread jubilation – both from within the country and diaspora across the globe – as Zimbabweans celebrated the end of 37 years of his rule, notwithstanding the manner of his removal via a coup.

The jubilation however, has been coloured by scepticism that Emmerson Dambudzo Mnangagwa, architect of the Gukhurahundi massacres of the 1980s and ZANU-PF stalwart, can signal the start of a new chapter in Zimbabwe’s history. What will President Mnangagwa’s priorities be ahead of elections slated for 2018? What reforms in the economic and political realm might be undertaken? What should South Africa’s engagement as SADC chair focus on?

You are invited to join SAIIA and KAS in a panel discussion with eminent Zimbabwean political analysts to dissect these and other emerging trends in the post-Mugabe era. Panellists include Dr Ibbo Mandaza, Executive Chairman of the Southern African Political Economy Series (SAPES) Trust and Kuda Chitsike, Director of the Research and Advocacy Unit.

Ibbo Mandaza is a Zimbabwean academic, author and publisher. He holds a Doctorate of Philosophy (D.Phil) in Political Economy from the University of York in England. He has researched and written extensively on issues of governance, international relations and public policy; and was one of the first senior African Civil Servants in post-independent Zimbabwe (1980-1990). Ibbo Mandaza is currently Executive Chairman of the Southern African Political Economy Series (SAPES) Trust, a regional Think Tank and Convenor of the Policy Dialogue Forum.

Kudakwashe (Kuda) Chitsike has been the Director of the Research and Advocacy Unit (RAU) since 2013 having jointly developed the organisation in 2006. A highly experienced and committed lawyer, Kuda has over 15 years of experience working on human rights, democracy and governance issues in Zimbabwe. Well-respected in the human rights fraternity and the women’s movement, Kuda has determinedly pioneered the documentation of gross human rights violations against women, enabling broader engagement with the issue. Kuda holds an LLM in International Public Law from the University of Stellenbosch. 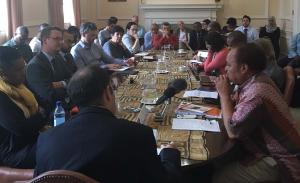