Strengthening the UNSC: Tapping into Germany's and South Africa's experience

The conference aims to unpack the mechanisms for building consensus on key issues that are brought before the UNSC. Presentations focus on how effective permanent and non-permanent members in their engagement on polarising issues are.
May 30 - 31, 2011 8h30-16h30 Clock

This session will unpack the mechanisms for building consensus on key issues that are brought before the UNSC. How effective are permanent and non-permanent members in their engagement on polarising issues? Who are the bridge-builders? What mechanisms are being employed to ensure consensus? Which areas require reform to enable more effective engagement?

This session will unpack the modalities of engagement between regional bodies and the UNSC. It will take a comparative look at how the AU and the UNSC engages on African conflict situations and the division of labour between the two bodies, versus the EU and its engagement on European questions . Who takes the lead? How are resources mobilised? How does one ensure coherence of effort and political agreement? (It will discuss the extent to which the AU is able to steer conflict prevention initiatives with UNSC support. This session will also unpack how effectively the Africa group operates as a lobby group in the UN on critical African issues that are brought before the UNSC.)

Roland van de Geer, Ambassador of the Delegation of the European Commission tbc

17:30Reception by invitation of the German Ambassador Dieter Haller

Both South Africa and Germany have been involved in peacekeeping and conflict resolution in Africa. This session will explore two examples. The first is the DRC, where Germany headed up EUFOR in the run-up to the 2006 elections and SA played a crucial role in the negotiation process and the organising of the elections. The second example is Sudan, where SA chairs the AU Committee on Post- conflict Reconciliation and Development. These sessions will investigate the various modalities of engagement by the UNSC on issues that are brought before it. What is the role of special rapporteurs and special envoys? How is non-compliance dealt with? How effectively are regional organisations brought into international initiatives?

This session will wrap up the previous ones and draw on South African and German positions in the UNSC. What and who are the bridge-builders? How and where can they ensure consensus? How can the two states work together more closely and more effectively?

Lindiwe Zulu, International Relations Advisor to the President of the 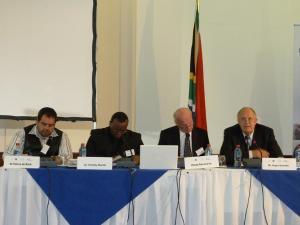