CHALLENGES AND OPPORTUNITIES OF MIGRATION FLOWS

On May 18 2018, the Konrad-Adenauer-Stiftung together in co-operation with the Pan-African Parliament, South African Institute of International Affairs (SAIIA), United Nations High Commissioner for Refugees (UNHCR) and the Delegation of the European Union to South Africa hosted a forum on Africa-Europe: Challenges and Opportunities of Migration Flows.
May 24, 2018 Ordering Information 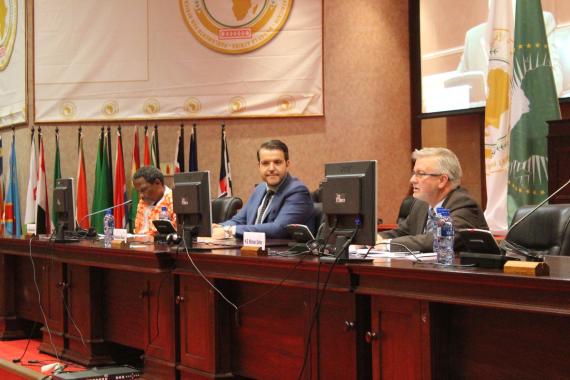 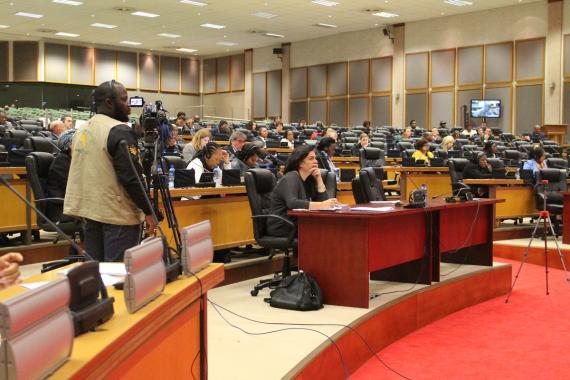 Delegates at the conference 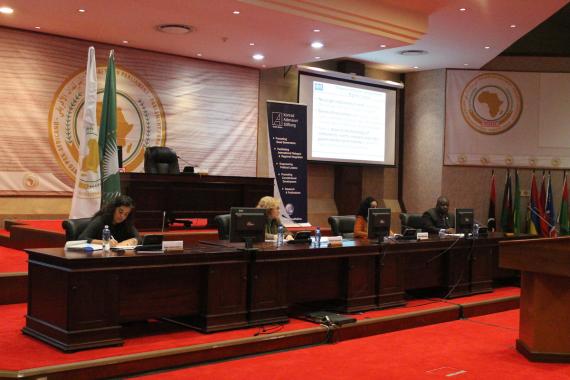 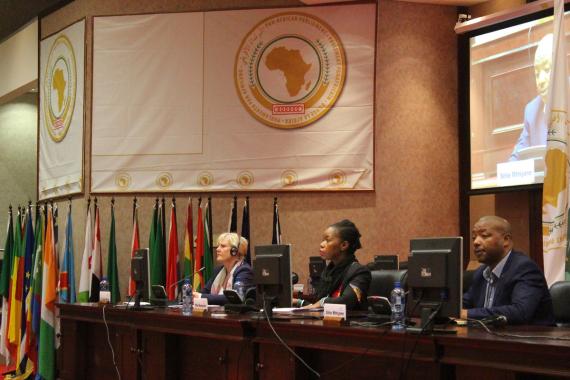 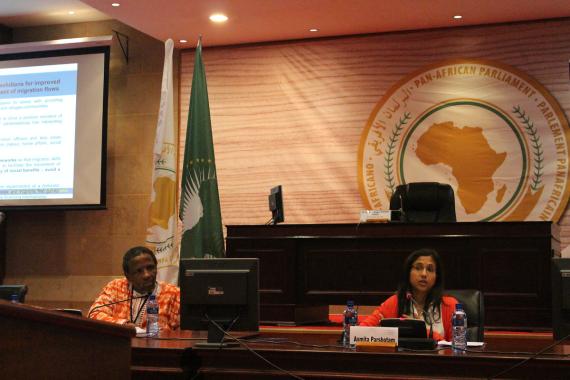 The event, which took place at the Pan-African Parliament (PAP), was attended by members of the Pan-African Parliament, members of the European Parliament and civil society including representatives from the International Organization for Migration (IOM), Institute for Security Studies and the South African Department of Home Affairs. The forum’s overarching goal was to provide a platform for informed debate on African-European relations in the context of dynamic migration trends and policies. The event, which was open to the public after prior registration, was attended by a total of one hundred and fifteen delegates.

The programme started with welcoming remarks given by H.E. Marcus Cornaro (EU Ambassador to the Republic of South Africa), Mr. Henning Suhr (Resident Representative of KAS South Africa) and Ms. Elizabeth Sidiropoulos (Executive Director of SAIIA). They all raised attention to the complex nature of contemporary migration dynamics and stressed the need for close cooperation between African and European stakeholders.

After the forum had been officially opened by a member of the bureau of the Pan-African Parliament, the first panel started with presentations from H.E. Michael Gahler, Chair of the European Parliament delegation for relations with the Pan-African Parliament and Dr Matlotleng Matlou from UNHCR. The panel was moderated by Nickolaus Bauer, reporter for eNCA. The panel focused on the topic of migration policies and how they affect relations between Africa and the EU. A key topic within the panel discussion was whether or not Europe and Africa share a special relationship due to historical and spatial reasons and whether both continents are fulfilling their responsibilities in dealing with migration. Dr Matlou further provided material on global and regional migration dynamics, pointing out that Africa is host to large numbers of migrants and refugees and bringing attention to the phenomenon of “Brain-Drain”. He also provided insights on “mixed migration” (migration flows which are guided by different motivations), a topic which plays an important role in understanding contemporary migration dynamics between the two continents.

The second panel consisted of Ms. Alem Makonnen from IOM, Ms. Belen Calvaro-Uyarra from the Delegation of the European Union to South Africa and H.E. Dr Tapiwa Mashakada, Member of the Pan-African Parliament. The panel focused on the international governance of migration. On the basis of the currently discussed “Global Compact for Migration” (GCM), an UN-led approach to global migration, attention was given to the evolution of a global migration policy framework. Alem Makonnen from IOM stressed that while progress is being made, instruments to regulate migration are still highly fragmented. The panel was moderated by Elizabeth Sidiropoulos from SAIIA.

The third panel of the well-attended event focused on the challenges and opportunities faced by receiving countries of migrant flows. The panel consisted of Mr. Sihle Mthiyane from the South African Department of Home Affairs and H.E. Nadine Morano, Member of the European Parliament. Ottilia Maunganidze from the Institute for Security Studies moderated the panel. Both speakers provided insights in a professional, yet refreshingly honest manner. H.E. Nadine Morano noted that responsibility for African migrants lies foremost with African countries. She stated that uncontrolled irregular migration is neither in the interest of the EU, nor in the interest of the African continent. While Europe needs to continue to provide opportunities for African migrants, politicians have to foremost carry out the mandate of their voters. She declared that irregular mass migration to the EU will lead to a decline in acceptance among receiving countries, promoting xenophobia and the strengthening of right-wing parties.

Mr. Sihle Mthiyane provided a South African perspective on the topic, emphasizing that the country’s asylum system is getting abused by migrants originating from countries that are politically stable. While South Africa by far remains the region’s biggest economic power, inequality and unemployment rate within the country are unparalleled among other middle-income countries. Migrants often compete for economic resources and jobs with the poorest of South Africans, giving potential to xenophobic attacks on immigrants.

The event concluded with a panel on intra-regional and intercontinental migration-how to find common solutions. Ms. Parshotam from SAIIA raised attention to the fact that neither “migrants” nor the situations that give rise to migration are defined in a clear and unambiguous manner. Furthermore, she provided insights on African discourses on migration, stating that while the continent is generally very open minded towards migration, discussions are sometimes framed by debates of securitization that are used by leaders to create political capital for their own interests. Concluding, she noted that there are clear discrepancies between African domestic policies on the one hand and visions declared by the African Union on the other hand.

After each panel, time was given for the delegates to interact with the speakers, ask questions and further elaborate on the topics. 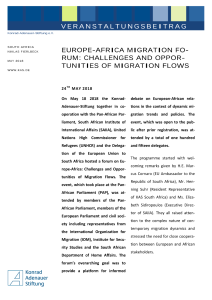