South Africa has eleven official languages namely English, Afrikaans, Zulu, Xhosa, South Sotho, Tswana, North Sotho, Venda, Tsonga, Swati and Ndebele. However, English is dominant in society but especially in workplaces and schools. Afrikaans used to have prominence however, its importance is slowly diminishing but the rest of the African Languages are still lagging behind. In recent times, there have been students’ protests especially at institutions of Higher Learning, the students’ main concern is that they do not want to learn in Afrikaans mostly preferring to be taught in English.
February 26, 2018 Ordering Information 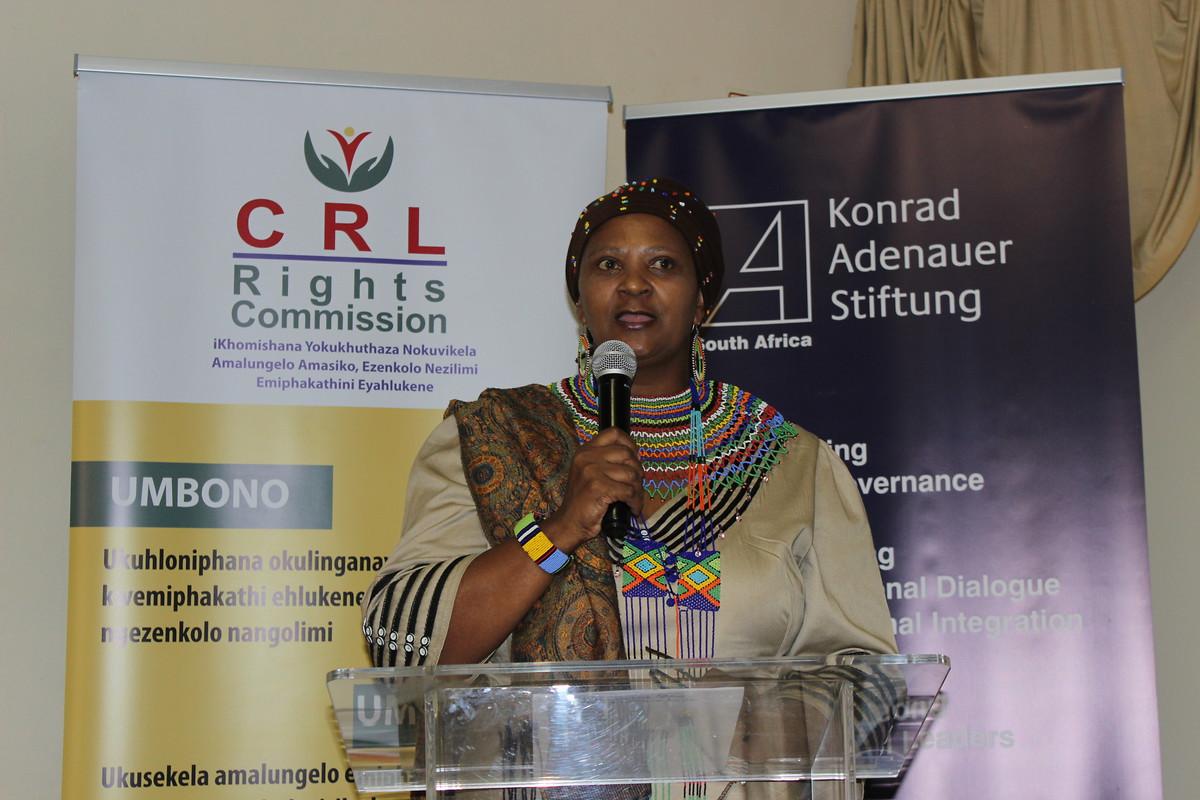 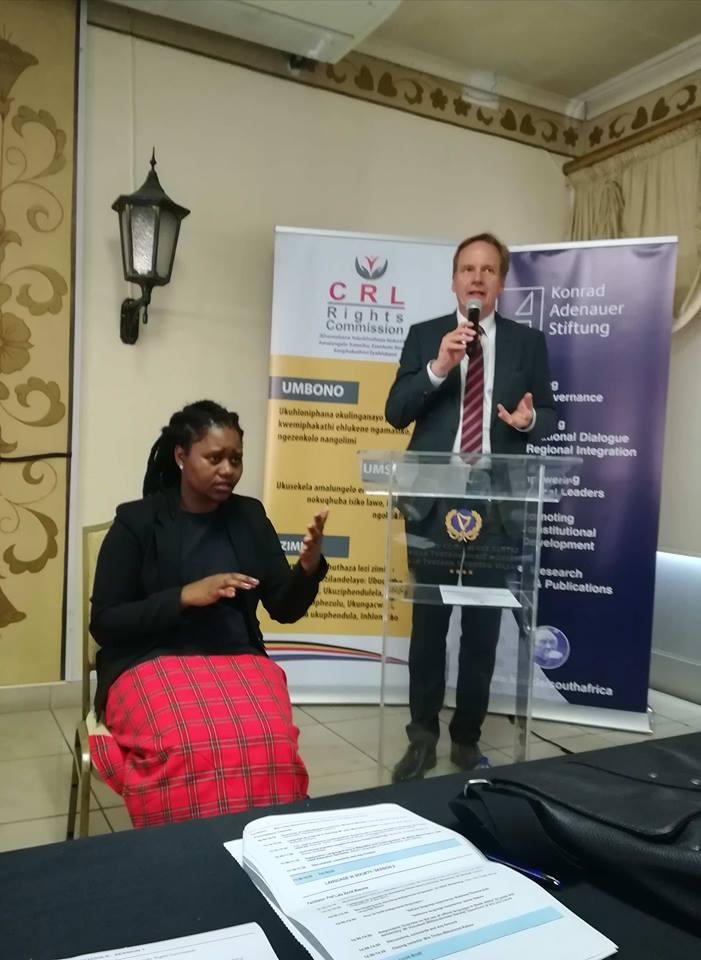 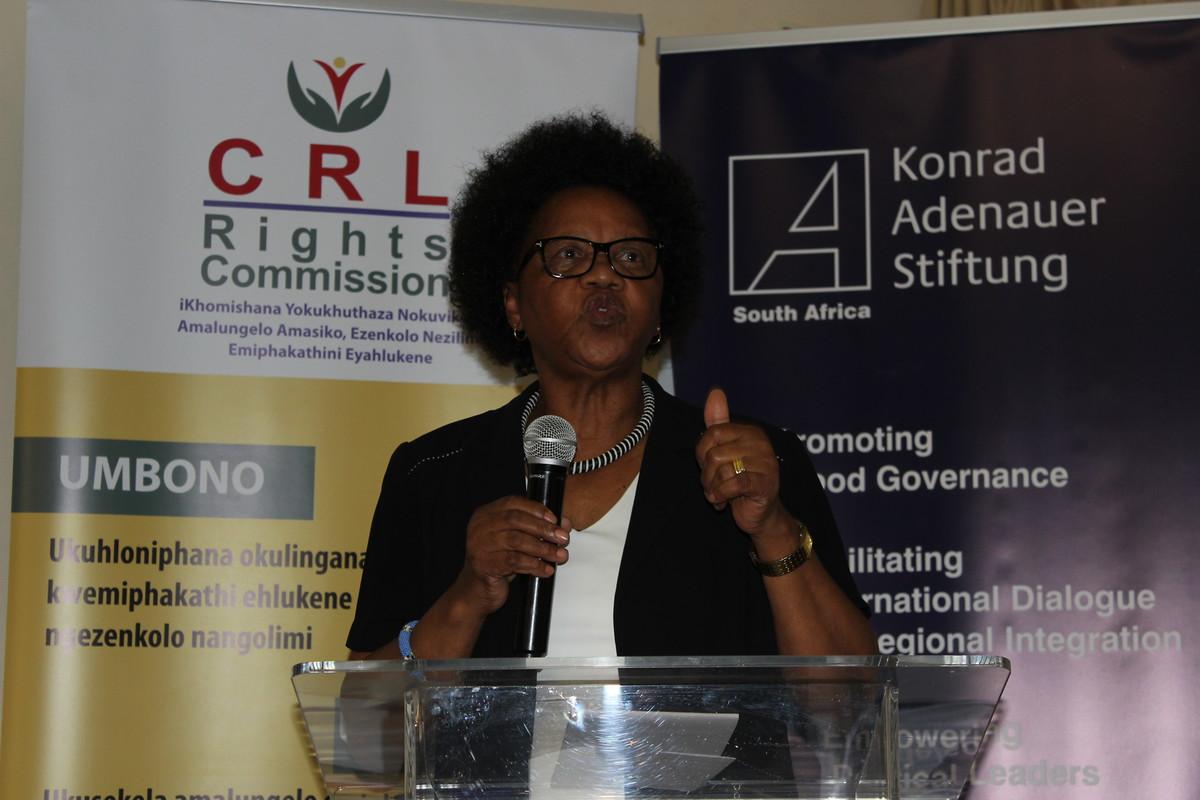 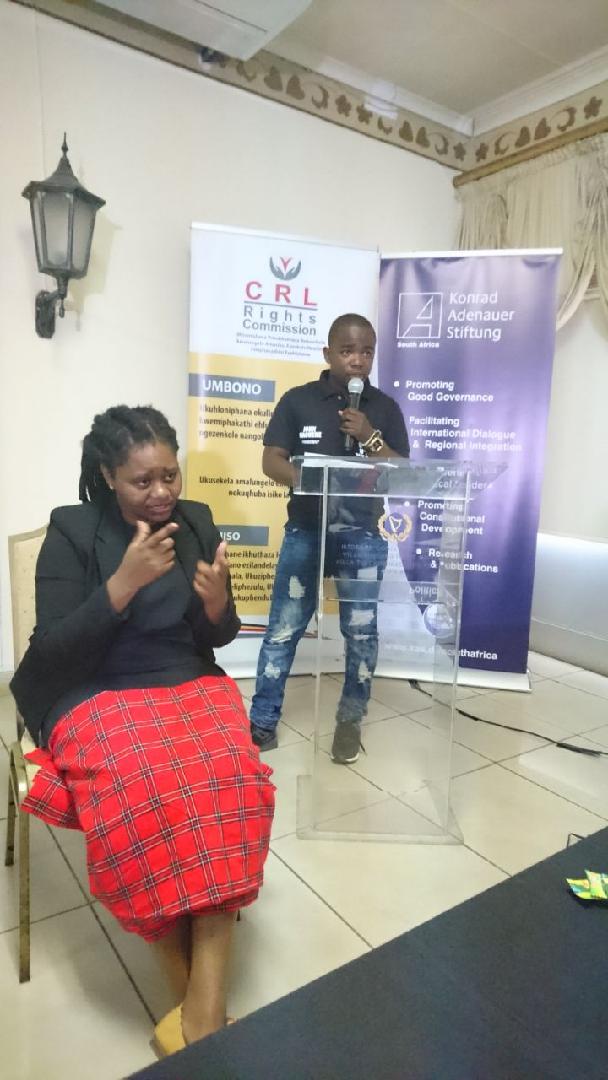 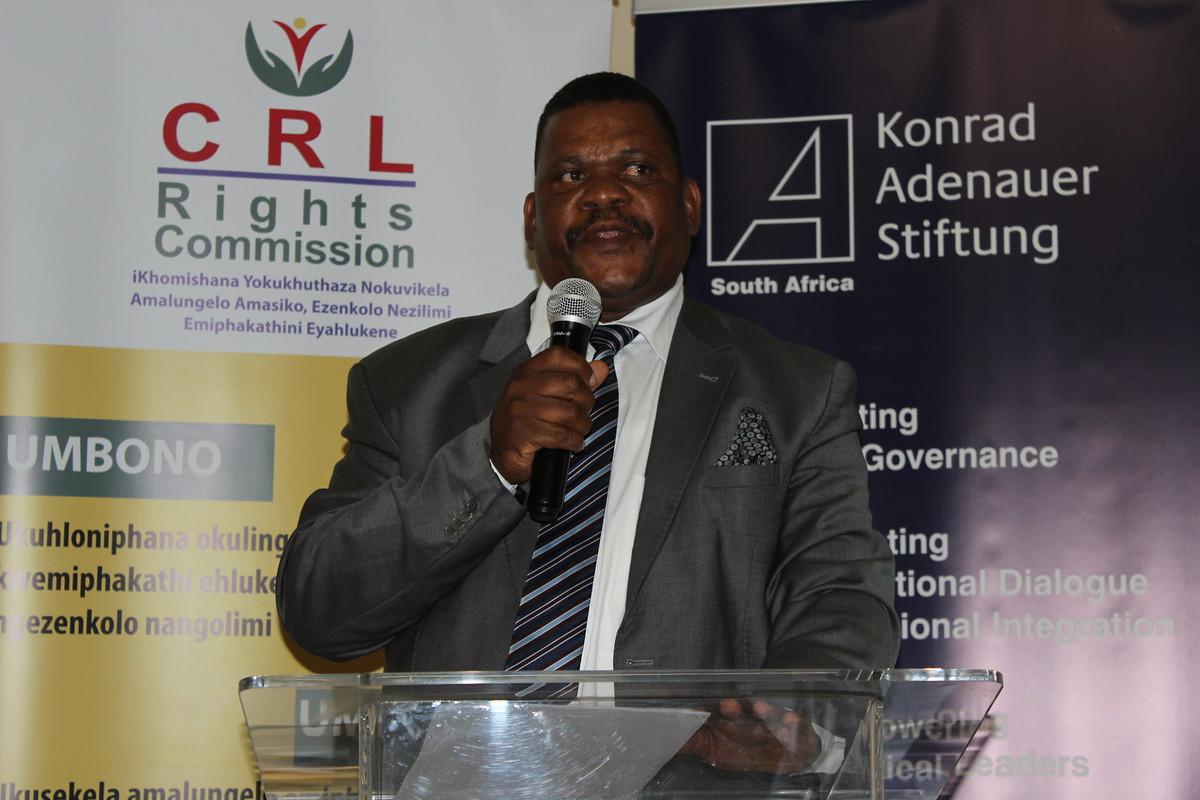 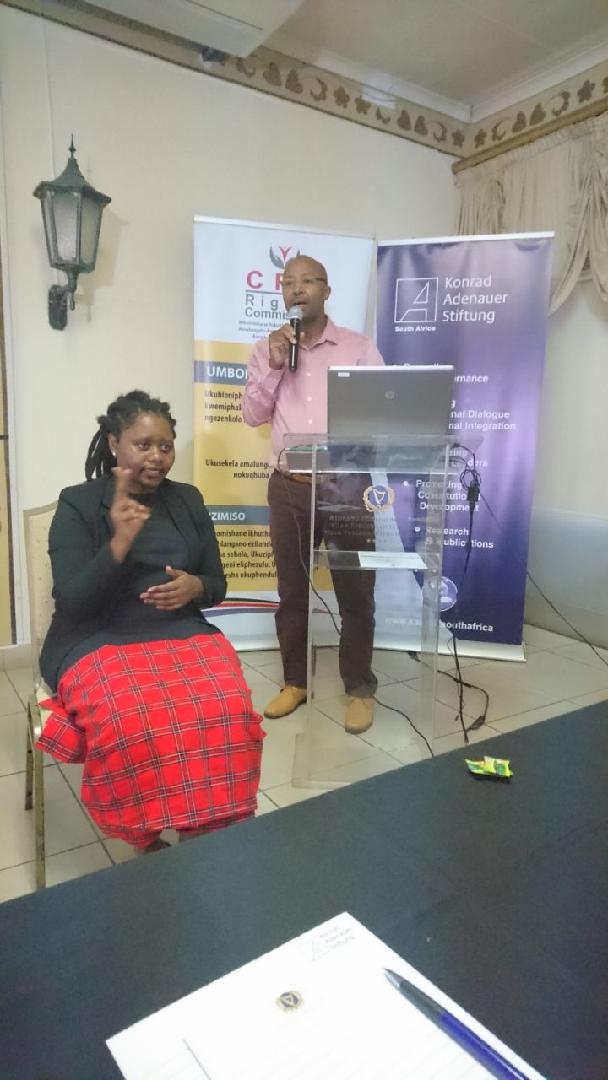 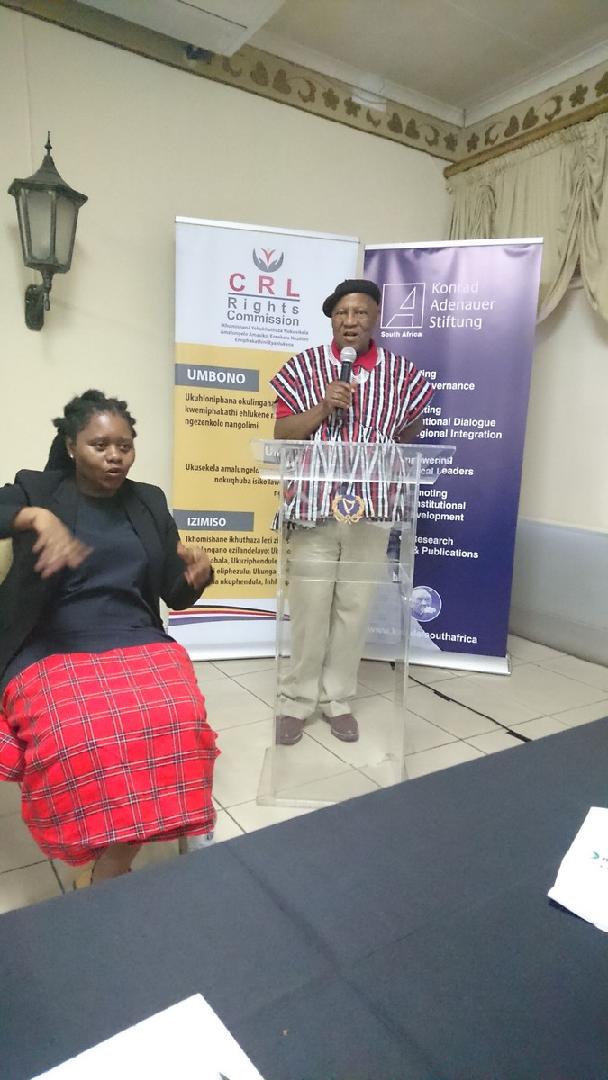 The Konrad Adenauer Foundation and the CRL Rights Commission hosted a conference titled "The importance of multilingualism in promoting and deepening social cohesion and nation building in a democratic South Africa" on 21 February in commemoration of International Mother Language Day. International Mother Language Day was proclaimed by UNESCO's General Conference in November 1999. The aim of this special event was to promote linguistic and cultural diversity and multilingualism. The United Nations General Assembly on 16 May 2007 called upon Member States "to promote the preservation and protection of all languages used by peoples of the world". This initiative not only increased awareness of language issues, but also mobilized partners and resources for supporting the implementation of strategies and policies in favour of language diversity and multilingualism in all parts of the world.

The main aim of the conference as articulated by the Chairperson of the CRL Rights Commission Ms Thoko Mkhwanazi-Xaluva was to use multilingualism as a tool for nation building and social cohesion. She emphasized that for South Africans to live together peacefully they must embrace one another, tolerate one another and build a strong nation. She quoted Dick Stanley in his article: What do we know about social cohesion: The Research Perspective of the Federal Government’s (Canadian) Social Cohesion Research Network. “Social cohesion is defined as the willingness of members of a society to cooperate with each other in order to survive and prosper. Willingness to cooperate means they freely choose to form partnerships and have a reasonable chance of realising goals, because others are willing to cooperate and share the fruits of their endeavours equitably”. Language is an important feature of people’s identity. Nelson Mandela once said “If you talk to a man in a language he understands, that goes to his head. If you talk to him in his language that goes to his heart”.

All the esteemed speakers at the conference spoke in one voice about the importance of language especially mother language. Mr David Matsepe, Head of Research at South African Democratic Teachers (SADTU) stated that his organization advocates for the use of indigenous languages as resolved by UNESCO. He further mentioned that denying learners to learn in their mother tongue is denying them knowledge and this also adds to high failure rate. Though learners may be taught in their mother tongue in township and rural schools however their assessments are done in English which is a disadvantage for them. Mr John Macheke, President of Congress of South African Students (COSAS) is against using English and Afrikaans in schools where the majority of learners are African. He asked the CRL Commission to help them fight so that indigenous languages must be used from pre-school to high school.

Prof Monwabisi Ralarala, Chairperson, African Languages Association of South Africa said though the Constitution is clear about multilingualism but the problem is the implementation. He further stated that Afrikaans is under threat but African languages are affected even more. Institutions of higher learning do not take the students’ profile into account and research shows that language problem is a problem which exacerbates the high failure rate. Embracing language development, implementing and maintaining multilingualism has the following benefits:

Professor Kwesi Kwaa Prah, Centre for Advanced Studies of African Societies highlighted the frustration of students when they ask why are they being taught in English instead of their indigenous languages. Africans are becoming more multilingual. He complained that most African languages are oral and if they are not made literate they will die with time. African languages must be made economically viable to ensure their survival. He urged CRL to push harder to achieve multilingualism.

Mr Christoph Plate, Director of KAS Media Subsahara Africa, highlighted the topic of multilingualism from an international context. Multilingualism is necessary to create a national feeling. In his speech he was sharing his experiences and examples of language policies that he has witnessed in different continents, which explains a lot about the importance of diversity in languages on the one hand but also about the necessity of a clear policy in order to remain connected to the world and not to lose out in these times of globalization on the other hand. His examples made clear that it is possible to prevent a language from extermination; we need enthusiasts and the will power to achieve this. But furthermore languages that don’t even have all the terms in specific sciences and fields are not a practical teaching language, especially for a generation of students who needs to be prepared for the international interaction and challenges.

He summarized that language is beauty, diversity and it encourages participation, but it also requires capital to finance radio stations, language classes and translation services. Languages that feel threatened might feel so because they have been dominant and imposing for a long time. But still it has to be acknowledged that the language of politics or finance is a different one and when it comes to teaching it is important to lay groundwork in one’s own language, but it is also necessary to be independent-minded to accept that there might be other languages that are dominant or more practical.

Mr Mntwana Thulane Zulu summarized the history of the existence of the International Mother Language Day which should promote peace and multilingualism around the world and the protection of mother languages. This is in commemoration of the 1952 Bengali Language Movement in Bangladesh. In Dhaka students were killed by the Pakistani police while they were fighting for their language rights. He compared this incident to the Soweto uprising of students against the apartheid regime. Although the violence is over now, students still have to fight for their language rights. Especially because English is still seen as the better language compared to Afrikaans and African languages.

Ms Pumla Madiba, CRL Rights Comissioner, explained how IsiXhosa is not only a language of communication. It also represents a home, a community and it stands for a whole society. During the colonial times it was on the same level with English. However, currently IsiXhosa is neutralised. It is rare these days to find people speaking only IsiXhosa in conversations. English and Afrikaans words are also used as a result the language loses the beauty and authentic form. Parents must encourage kids to speak IsiXhosa in its beautiful authentic form.

In her closing remarks Chairperson of the CRL Commission Ms Mkhwanazi-Xaluva reiterated that young people must be engaged in conversation on issues of culture and heritage. Their voices must be heard. She further impressed upon the Department of Education to provide leaners with Constitutions in their Mother Tongue and they must be taught about their rights. The Conference resolved that the CRL Commission must take the issue of multilingualism further and make it a reality for all South Africans. 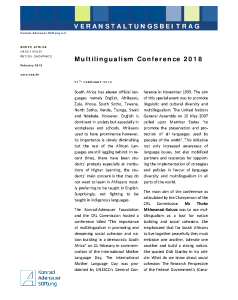